Other // Unrated // March 31, 2009 // Region 0
List Price: $19.95 [Buy now and save at Amazon]
Review by Chris Neilson | posted March 4, 2009 | E-mail the Author
Filmmaker Steven Greenstreet offers a leftist critique of the American obesity pandemic and its causes in the 2008 documentary Killer at Large. For the woes of obesity, Greenstreet indicts a myriad of villains from Nixon's Secretary of Agriculture Earl Butz (1909-2008), President George W. Bush, the FCC and the Department of Education, to agribusiness, food and beverage companies, fast food restaurants and advertisers, to doctors, local school boards and parents. 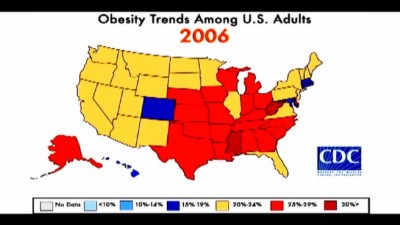 Greenstreet's assembled experts go beyond the conventional wisdom that Americans are eating too many calories and exercising too little, to point the finger at stress as a significant underlying factor in weight gain. Stress prompts people to use food to psychologically self-medicate, while their bodies in turn interpret the stress as a signal to store additional fat, we're told. The stress may be particular to the home (e.g., parents fighting) or to the culture as a whole (e.g., fear of terrorism), but the effect is the same, added pounds.

Great conspiracies need arch-villains, and for this one it's the federal government which subsidizes corn syrup and unhealthy school lunches, under-regulates advertising to children and food safety and labeling, silences dissenting voices, disseminates confusing or inaccurate information about nutrition and exercise, and so on.

To break up the tedium of advocates railing against government and business, Greenstreet provides kids talking about their personal experiences with obesity. As presented by Greenstreet, the posterchild for obese child victims is Brooke Bates, who apparently caught the media's eye in 2007 for undergoing liposuction at age 12. We're treated to extended images of Brooke's surgery, the bottom-feeding media coverage and subsequent weight gain of Brooke, ending with experts telling us that Brooke needs nutritional and psychological counseling not surgery to address her weight. 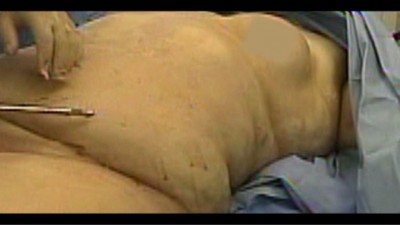 By focusing on child victims who are indoctrinated into a harmful lifestyle of sedentary gorging, and by casting nearly everyone else from parents to the President as perps or rubes, Greenstreet is able to cast the argument that individuals are primarily responsible for their weight as an empty ruse. In effect, the critique goes, how can anyone be responsible for their weight when they're so pervasively indoctrinated as children?

In typical fashion, the documentary ends with nascent solutions such as new bike paths, community gardens, improved school lunches, workplace exercise, and so forth, though this effort feels halfhearted.

Presentation
Video:
This is one to see on as small a screen as possible, preferably nothing bigger than an iPhone. Presented in an anamorphic 1.85:1 aspect ratio with black bars at the top and bottom, the image itself is a curious 2:1 aspect ratio. To achieve this, the archival material is awkwardly cropped, but far worse than the aesthetics of the framing is the atrocious picture quality that results when analog video is cropped and blown up this way. The newly-shot material is far better, but again it appears to have been shot with a different aspect ratio in mind leaving most of the talking heads looking scalped.

Audio:
At its best the 2.0 DD audio is adequate to hear the dialogue, but frequently the music is overly loud, and there's an excess of background noise and distortion, especially on the extras. No subtitles are provided on this release.

Extras:
Killer at Large is packed with extras.

Final Thoughts:
Watching Killer at Large gave me an even greater appreciation for the feat accomplished by Mark Achbar and Jennifer Abott in the 2003 documentary The Corporation. Through expert editing of superb interviews, Achbar and Abott were able to present a wide-ranging, but thoughtful and persuasive leftist indictment of corporate commercial entities. If Greenstreet and his co-creators had the talent of Achbar and Abott, no doubt Killer at Large could have provided much needed food for thought about the causes and remedies for obesity. As is, skip it.

Viewers interested in this topic may wish to check out King Corn which provides a more focused and engaging critique of federal food policy.