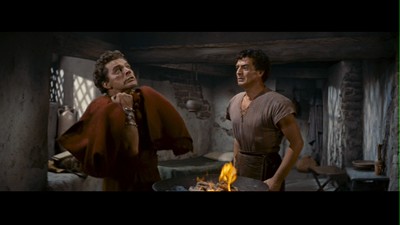 No, it's not a Dennis Hopper line from Apocalypse Now or a hippy come-on from one of his buddy Peter Fonda's biker gang movies. It's the strange religious tic bestowed upon the morally conflicted Roman tribune Marcellus Gallio, effected with the appropriate amount of disbelief by Richard Burton, apparently counting his money in the pauses. It's meant to ask the sinners that surround him if they were there when he drove the nails into Jesus' hands, or whether they are amongst the untouched and unaware.

Luckily for Christianity, this sales pitch has long since fallen by the wayside since it was entered into the brochure back in 1953, when The Robe sucked in gobs of money and lost five Academy Awards. Unless Jesus' message of everlasting peace is meant to refer to the extended nap this non-historical anti-epic will make you long for, because The Robe is more suitable for selling a comfy pillow than a religion. At one point midway through the first act, a rather bewildered Pontius Pilate (Richard Boone), searching for an answer as to who gave him this icky script, declares that he needs to wash his hands. It's a rather obvious Biblical allusion, one the nearby servant has probably heard too many times before. He slouches against the wall, arms folded, barely able to muster the energy to tell Pilate, "You've already washed them." If that actor had put that clip on his audition reel, he'd have been sure to get a part as an extra in The Wild One playing Juvenile Delinquent #5 standing by the jukebox and finding nothing worth rebelling against.

I mean, seriously, if the actors in the movie are this disinterested in it, what hope do we have?

For those looking for the summary, here it goes: Marcellus Gallio, a rival of Caligula (Jay Robinson), pisses off his more powerful enemy to such a degree that he is banished to Jerusalem to learn his lesson. He takes along his muscular and tanned Greek slave Demetrius (an appallingly bad Victor Mature), who immediately upon stepping foot in the Holy Land meets the Messiah's gaze and is instantly converted. (Jesus, too embarrassed by this production, never allows his face to be seen.) Sucks to be the slave, then, whose master is the dude wielding the hammer up on Calvary. Heartbroken, Demetrius absconds with the dead Christ's frock, which burns the flesh of Marcellus when he tries to wear it. Demetrius flees, and Marcellus, feared to be mad, is sent on a quest to find the cursed garment and destroy it. He finds religion instead, leading the crusade back to Rome and reclaiming his betrothed (Jean Simmons, who was much luckier when Hamlet sent her down the river).

Now, before you fire up your hate mail, don't get this twisted: I have no problem with the religious content of the movie, as hamfisted as it is. I've done my time in Sunday School, and sure, if there is a maximum on eye rolling that gets one condemned, they are preparing a place in Hell for me right now. Even so, if a story is told well, I don't care what religion or philosophy it peddles. Dazzle me with your skills, kid, and I'll listen to whatever you're hawking. Such is not the case with The Robe. 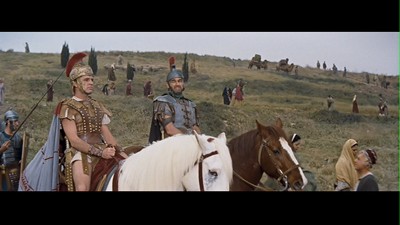 Directed by Henry Koster (Flower Drum Song) from a script by Philip Dunne (The Agony & the Ecstasy) and Albert Maltz (The Naked City), adapted from a novel by Lloyd C. Douglas (Magnificent Obsession), The Robe is a drag from start to finish. The cast seems uninterested because the script isn't interesting. If the medium is the message, the writers decided to stop at the message and let the rest sort itself out. There is no tension, no passion, all of the converts walk around like blissed-out zombies, and there is no sense of their savior's majesty. Apparently this party was BYOB: Bring Your Own Belief, because no one is going to bother to explain theirs. Just trust that what they are doing is important, m'kay?

Where there is a sense of majesty in The Robe, and what makes it still enough of a curiosity to recommend a viewing by cinephiles, is its use of the massively wide frame of Cinemascope. The first picture released using the 2.55:1 aspect ratio, The Robe gave Henry Koster a cinematic canvas never before available. As Martin Scorsese says in his introduction to the picture, you have to imagine the curtain opening ever wider while you're sitting at the theatre, exposing new dimensions to the screen than you had seen previously. Koster packs his frame with detail, be it a two-shot close-up or a wide panoramic shot of ancient Rome or the crucifixion up on a distant mountain. Sure, his camera pretty much never moves, so it's all static shots from start to finish, but still, you have to appreciate just how much movie there is to gaze upon frame by frame.

Just remember that for every moment where your breath is taken away, there are at least five more opportunities to steal it back. 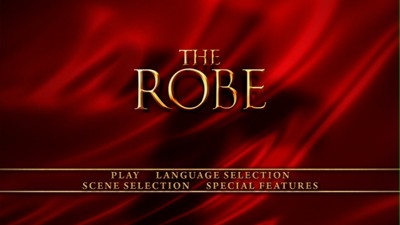 Video:
As indicated in the body of the review, The Robe was shot in Cinemascope at a 2.55:1 aspect ratio, and this Special Edition DVD boast an all-new anamorphic transfer that is truly awesome. Fully restored, scrubbed from top to bottom, it's a lovely picture and a powerful historical document for how big the movies once were.

Some fans may be wondering where the fabled 1.33 standard version that was shot simultaneously and issued to theatres not equipped for Cinemascope has gone. At one time this was also the print shown on television, and it features different takes than the wider version. Though billed as a Special Edition, this DVD of The Robe does not come with that second version; though Blu-Ray buyers do get a feature showing comparison shots. Us Standard Definition folks will just have to wait.

Sound:
Both a 5.1 and 4.0 Dolby Surround mix are provided, with the 4.0 actually being the one true to the original soundtrack. It sounds quite good, as sharp and clear as the image it accompanies. For those who speak French, you also have the option of a mono dub.

English subtitles and Closed Captioning are also available, as is a Spanish subtitle track. 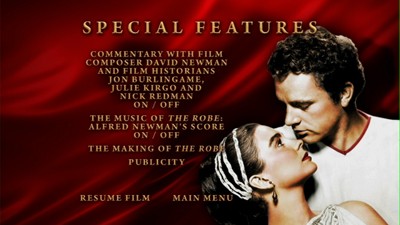 Extras:
As mentioned above, the bonus features are led by a short introduction by director Martin Scorsese, which plays automatically at the outset of the film. There are also two alternate audio tracks that can be played while watching the movie: a full-length commentary featuring composer David Newman and film historians Jon Burlingame, Julie Kirgo, and Nick Redman, alongside another track where Alfred Newman's music is isolated on the soundtrack. Given the involvement of Newman Jr., naturally much of the discussion is focused on the music, but other aspects of the production are also touched on and the overall content and personality of the conversation is quite excellent.

"The Making of The Robe" is a pretty good, comprehensive, half-hour documentary covering the production, featuring mostly interviews with contemporary scholars and professionals, though with a new interview with Caligula himself, Jay Robinson. In addition to archival photographs from the set, the premiere, and of people involved with the movie, we are also treated to developmental drawings from the film's early days as an RKO property and the expected clips from the film. Similar archival pieces for the 1953 release can be seen in the publicity section, which is broken down into four parts: Interactive Pressbook, Poster Gallery, Lobby Cards, and Publicity Stills.

Disappointingly absent from the DVD, though actually advertised on the box, is a featurette about the creation of Cinemascope. I have no explanation for why it is not on the disc, though it is on the Blu-Ray release along with several other extras missing here (though, none of those other ones are promised by the S-D packaging). Please see Stuart Galbraith IV's review for not only a much kinder and far more intelligent assessment of the movie, but also information on extras on the Blu-Ray version that are not on the S-D release. I mean, I think Gone With the Wind is boring, too, so what do I know?

FINAL THOUGHTS:
Rent It. See it for the spectacle, forget about the rest. The Robe: Special Edition is an historical picture, a pioneer of the very widescreen Cinemascope process, and it gives the viewer many pretty things to look at--all the more pretty to our modern eyes thanks to a massive restoration job bestowed upon the picture. The story itself is a ridiculous groaner, however. Following Richard Burton as a Roman soldier who goes from nailing Jesus to the cross to the first man to bring Christianity back to his country, it's long on earnestness and short on actual drama. The actors look bored, and you know how yawns are infectious.... 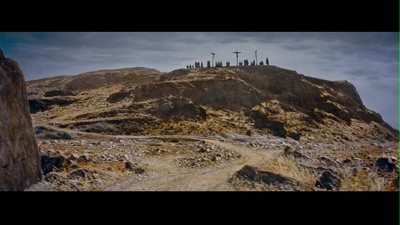