Italian surrealist Marco Ferreri's was a well-established provocateur for decades before his first English language feature 1977's Bye Bye Monkey, the Italian title Ciao Maschio more aptly translating to "Goodbye Masculinity." With lead Gérard Depardieu and frequent Ferreri actor Marcello Mastroianni, Ferreri headed to New York and made a film about a man, his baby monkey, and the ruination of time on mankind.

Gerard Lafayette (Gérard Depardieu) is a young man living in a post-apocalyptic New York where the human occupation is sparse. People are outnumbered by rats so much that poison is being sprayed on streets. Lafayette has two jobs, wiring electronic rigging in a museum dedicated to the rise and fall of Imperial Rome and doing lighting for a feminist theater troupe. He also frequently hangs out with four geriatrics, including his best friend, the lovelorn Luigi (Marcello Mastroianni). The theater troupe has a conversation about what their next subject should be, decide it should be rape, but none have experienced it or want to be one the receiving end, so they "rape" Lafayette. His "rapist," Angelique (Gail Lawrence, aka. 70's porn star Abigail Clayton), is gentle with the act and takes a liking to him. While wandering the beach with his elder buddies, Layfayette discovers the body* of King Kong and clutched in its hand a baby chimp.

Describing the plot as some A-to-B-to-C narrative is certainly possible and the characters have climatic arcs but bear in mind Ferreri is working on looser, anarchic, terms, so its more about mood and symbolism than it is traditional structure. Likewise, the characters are more archetypes, vessels, than they are deeply drawn human beings. Suffice to say, this one isn't a semi-sequel to DeLaurentis King Kong or even the source for a loose Tony Danza remake in Goin Ape! Layfayette tries to abandon the chimp but cannot and takes the monkey in as his child. Angelique Layfayette's relationship is chaste because she says her love keeps her from consummating their relationship. Luigi becomes increasingly depressed over his age, being out of touch and seen as less than desirable. A government agency comes around and asks that the museum integrate modern historical nods, like turning Ceaser into JFK and Nero into Nixon.

Ferreri's signature was always one that straddled between loose playful jibes with sudden turns into bleak melancholia or gruesome horror. Bye Bye Monkey wasn't the first time he had delved into the apocalypse (The Seed of Man), used simians for symbolism (The Ape Woman), or even begun a film with men in gas masks (Dillenger is Dead). One of his biggest, repeated themes was that of male virility, mainly its loss, of how modern man was becoming more and more ineffectual and passive, a slave to the progress around him and the changing expectations that come with aging. Here Layfayette the modern man, a sign to the old of the youth they've lost and their history that no one cares about, but he is also totally incapable of being a father or a lover, lost, a dead end.

I can always tell how interested I was in a movie I review based on the number of doodles I made on my notepad. Nearly a third of the page on my Bye Bye Monkey notes contains scrawls of little geometric shapes and rainy squiggles. When I first saw the film as a teen, stumbling upon it broadcast late night on cable, it was wonderfully impressive, especially to a kid who was first zealously getting into foreign and arthouse films. Now, with some distance and having seen a number of Ferreri films, I think it is a good but paler work within his resume. It contains some great ideas but Ferreri's natural looseness makes the results a bit stretched and shaggy. Yes, that free form nature makes the man and is one of the traits of surrealist expression, but applied too much and you get something that comes across as unfocused. 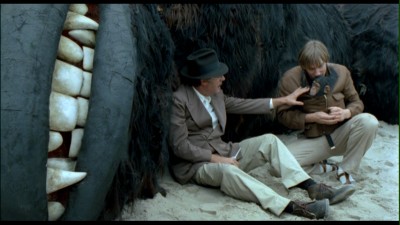 "The future belongs to rats," in Anamorphic Widescreen. Its quite a beautiful film with New York photographed largely under gray skies along empty streets and plowed beaches with lonely skyscrapers in the background. I stayed away from the first US release by Image because I heard the quality was bad. Koch Lorber does an okay job with the material. Yes, the print shows some era age, a minor fleck here and there, some softness, but decent color and contrast levels. Some slight combing makes for an annoying deficiency, but not so bad that it should turn off too many viewers, especially those used to their arthouse/cult films getting tighter budgeted and basic technical treatment.

Some hum and distortions are present on the Mono English track. Again, its a case where some audio restoration would have been nice, fixing the blemishes and spots where there was low audio recording, but its also forgivable and not a huge distraction. Thankfully the moments showcasing Phillippe Sarde's mournful score are still quite strong.

The sole extra is an excerpt (2:27) from the documentary Marco Ferreri: The Director Who Came From The Future. The snippet is annoyingly brief and obviously taken from a larger piece.

This is the kind of film that shows a creators obsessions and themes and has many memorable scenes but the overall film is just a tad rough and loose at its seams. I really love Ferreri but Bye Bye Monkey would be five or sixth down the list of films I would recommend to those unfamiliar with his work. The disc is okay, curious enough as a rental for neophytes, but Ferreri fans will want to seek out the Koch Lorber boxset released last year. *

Bye Bye Monkey, like all great surrealist films, has a many interpretive points, most quite purposefully so, some I think a little too vague. For instance, originally seeing the film, I thought the King Kong on the beach was a sculpture, yet in reading about the film in subsequent years, many synopsis and essays described it as a literal Kong corpse. Now finally rematching it, Luigi says, ‟What a beautiful sculpture,‟ but then backs up, falls to his knees, and gets out his inhaler. Moments later, Luigi says he cannot keep the baby monkey because he is allergic. I still have no idea, was Luigi mistaken that it was a sculpture, and that's why he had the attack, or was the attack only because of the baby? As the film progresses, Kong goes from full body, to just the head, to completely gone, but there are no rotted remains or broken structure.