Zeitgeist Video // Unrated // February 23, 2010
List Price: $29.99 [Buy now and save at Amazon]
Review by Chris Neilson | posted February 19, 2010 | E-mail the Author
Canadian-American filmmaker Astra Taylor's second feature-length documentary takes philosophy out of the classroom and into the streets. According to Taylor, The Examined Life's ideal viewer is a 16-year-old with an open mind who stumbles upon it on TV. Charged with making philosophy accessible, Taylor gives eight philosophers/academics ten minutes each to convey a big idea. To charm her audience and disarm her subjects, she films them in motion as they stroll, row a boat, or ride in a car.

The most recognizable of Taylor's subjects to average viewers is likely Princeton philosopher and social-critic Cornel West who's given pride of place by appearing at the beginning, middle and end of documentary. West sits in the backseat of Taylor's old Saab as she chauffeurs him through the streets of New York. Leaning over the seat, rattling off ideas in furious bursts reminiscent of Charlie Parker's bebop, West lays the film's groundwork expounding on the importance of confronting oneself, searching for truth and rejecting romanticism. 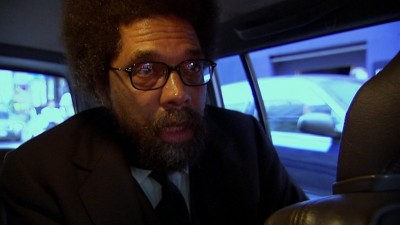 The motif of philosophy in the streets works to vary degrees. Noted Australian ethicist Peter Singer's critique of consumerism is made concrete by his stroll outside the boutiques of Fifth Avenue, and Princeton Philosopher Kwame Anthony Appiah's discourse on muticulturalism is enhanced by his stroll through an international airport, and Slovenian philosopher and psychoanalyst Slavoj Žižek, who starred in Taylor's prior documentary Žižek! and Sophie Fiennes' The Pervert's Guide to Cinema, vividly engages the imagination when he dons a red safety vest to wander through a London trash dump while counter-intuitively arguing that tackling impending environmental catastrophe requires that we become more alienated from nature not less. On the other hand, neo-Marxist Michael Hardt's discourse on democracy and revolution loses momentum and focus as he runs a rowboat aground in Central Park. 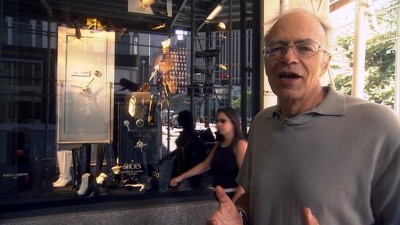 The other segments are strolls with deconstructionist Avital Ronell addressing the dangers of dogmatism, law professor Martha Nussbaum reassessing the notion of the social compact, and queer theory pioneer Judith Butler conversing with Taylor's sister, painter and disability-rights activist Sunaura Taylor about notions of body and our social obligations to one another.

While Examined Life is an often engaging sampling of the theories of a number of thinkers in their own words, it is not a representative cross-sample of contemporary philosophy. All of Taylor's subjects are postmodern and progressive in their worldview reflecting Taylor's own sensibilities. Thus, though there are ideological differences among the subjects, they're too subtle or diffuse to prompt the audience to weigh them against one another, and could lead Taylor's 16-year-old ideal viewer to wrongly assume that these viewpoints represent the scope of contemporary philosophy. 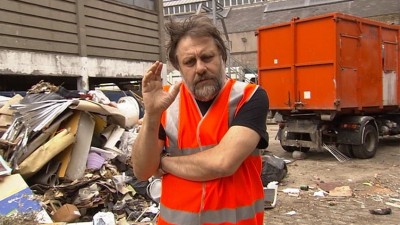 Presentation
Video & Audio:
Examined Life is presented in anamorphic widescreen (1.85:1 aspect ratio). Colors are lifelike and detail is generally good given the limits of the HD source material, however the image is interlaced.

The stereo audio sounds clear and dynamic, and optional English subtitles for the hearing impaired are provided.

Extras:
The extras include two additional walks, one with British philosopher Colin McGinn, who previously appeared in The Atheism Tapes, conjecturing on the trustworthiness of our sensory perception of reality, and the other with English philosopher Simon Critchley on the importance of acknowledging the constraints of mortality. Amateur quality post-screening Q&A's with the filmmaker, Cornel West, Avital Ronell and Kwame Anthony Appiah at New York's IFC Center provide some insights into the motivation behind the film as does a four-panel foldout booklet. On-screen bios and selected bibliographies and theatrical trailers for Examined Life and Žižek! round out the extras.

Final Thoughts:
While neither deep nor diverse, Examined Life is a terrific documentary to watch with a loved one or close friend with your thumb resting on the remote's pause button. My wife and I found plenty of points worth pausing to discuss at length, and likely you would too.