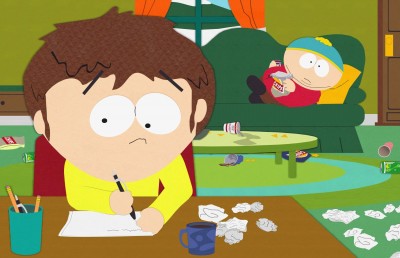 After thirteen seasons and
195 episodes, South Park remains one of the smartest and most
consistently funny shows on television. In its first season, the
program was a crude, daring bad-boy, willing to do anything for a laugh
- or to generate controversy. But as time passed, South Park's
reputation quickly grew as the intelligence of its creators became evident,
nearly every episode driven by sharp satire. The fourteen episodes
of South Park: The Complete Thirteenth Season

include a bunch of hits, a few that miss the mark, but, overall, add
up to a wholly satisfying season with a number of classic plotlines
and jokes.

I hate to try to demystify
the difficult subject of comedy, but it's interesting to think about
why some shows succeed for so long while other struggle and fail.
Maybe South Park's ongoing effectiveness has to do with the
continued ownership of the program by its creators, Matt Stone and Trey
Parker. Parker is credited as the writer and director of every
episode of the thirteenth season, with Stone serving as a producer and
voice actor.

But the real key to South
Park's success, in this reviewer's opinion, is the way it satirizes
topical material in a broadly inclusive way, which both makes the subject
matter highly relatable and prevents it from dating. Take Episode
1313, "Dances with Smurfs," which takes on Glenn Beck and James
Cameron's Avatar with equal force. In years to
come, Beck and Avatar will probably (let's hope) be a lot less
relevant than they are now, but these jokes will probably still work
- because the concept of Cartman turning the school's morning announcements
into a full-blown politicized chat show will still be funny, and so
will the "plagiarizing" of Cartman's Smurf story, regardless of
whether or not you've seen Avatar. The roots of South
Park's satire are always situational and character-oriented, using
topical references more as a "way in" to the jokes rather than serving
as their explicit basis. In this way, South Park is diametrically
opposed to its sworn TV nemesis, Family
Guy, which
it effectively (and permanently, in my view) eviscerated in the two-part
Season 10 masterwork, "Cartoon Wars."

"Fishsticks" is the standout
episode from the thirteenth season. It takes Kanye West to task
for being a humorless, self-important fool - and perhaps no one is
more deserving of the South Park treatment than this monumentally
egotistical jackass. But when you get past that, the real humor
of the episode is rooted in the "fishsticks/fish dicks" joke itself
and the very idea that a joke made up by fourth-graders, and operating
very much on a fourth-grade level of sophistication, could spread like
comedy wildfire across the country, finding its way into common parlance.
It's the fact that everyone knows this joke and sort of falls in love
with it (except Kanye, of course) that propels the episode along.
The Kanye West material is absurdist gravy; it works perfectly well,
but it wouldn't without the other, deeper-set concept behind it.

"Margaritaville" deals
with the collapsing economy. "Fatbeard" covers the spate of
attacks by Somali pirates. "Dead Celebrities" addresses the
onslaught of celebrity deaths in the summer of 2009. "Pee"
satirizes Roland Emmerich's 2012 and Mayan prophecy-believers.
What makes all of this even more impressive is the show's one-week
production schedule, which means that South Park is able to address
current events with incredible immediacy - to say nothing of the smart,
brash comedic tone that out-does Saturday
Night Live,
which prides itself on staying topical.

It's nice to know that
South Park - which has long outshone the decade-long decline of The Simpsons - will be around for at least another
two seasons on Comedy Central. The show remains fresh, sharp,
hilarious, and - yes - shocking. But the shocks are not for
their own sake. The alert comic sensibility of the show's creators
infuses each episode with a sense of unpredictable fun backed by an
intelligent skepticism of just about every major American enthusiasm.


South Park's thirteenth season is packaged like the show's other
releases. Fourteen episodes are spread across three discs housed
in a Digipak foldout sleeve. This is tucked into a card slipcover.

Each episode is presented in an enhanced 1.78:1 transfer.
The image is flawless throughout. The vibrant colors are rock-solid.
Contrast is excellent. The show's bright color palette remains
appealing. The show's success has allowed for the creation of
more detailed backgrounds, all of which are replicated with stark clarity
here.


The Dolby Digital 5.1 surround
tracks on each episode are crystal-clear and occasionally very active.
While dialogue remains at the forefront of the mix, music is enveloping,
and sound effects are often employed with a sense of space that opens
up the soundstage of this crudely animated program - sometimes in
surprising ways. Overall, the sound treatment is more engaging
than you might expect.


Co-creators Matt Stone and Trey Parker continue to provide their
Mini-Commentaries for each episode, short five-minute overviews
that are really all you need. The episodes speak for themselves
quite effectively, but having these insights from their creators is
enlightening. In addition to these, all Paramount has included
are a handful of Deleted Scenes (7:14) and an Xbox Live promo
titled A Behind the Scenes Tour of South Park Studios
(4:36). These are pretty paltry bonuses, but the show itself is
so strong, I have a hard time feeling shortchanged.


On the eve of its fourteenth season (it premieres on March 17), South
Park remains an energetic show, jam-packed with laughs, and a thoughtful,
engaged part of the culture to boot. It's amazing how many people
I come across who remain dismissive of the show despite the fact that
it's one of the smartest things on television. Highly recommended.