Men Who Stare At Goats, The


In 2009 George Clooney gave the performance of a lifetime and gained an Oscar nomination for "Up in the Air." Jeff Bridges did the same in "Crazy Heart," but he walked away with the gold. "Kevin Spacey" gave a wonderful, supporting vocal performance in "Moon," lending a tender humanity to a grimy robot. Stephen Lang chewed scenery like there was no tomorrow in "Avatar," making a clichéd madman, humorously memorable. When all these fine actors were brought together along with Ewan McGregor and Goat (hey, he got a cover credit after all) to make a comedy based on eyebrow raising events, the end result should have been gold. 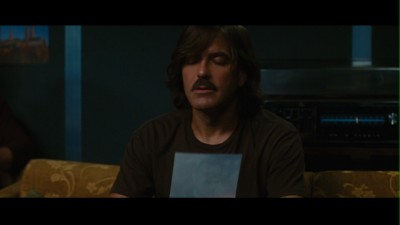 Ewan McGregor slips into the shoes of Bob Wilton (based on the author of the original novel, Jon Ronson) and it becomes apparent, that something is fishy from the get-go. The Scottish McGregor is saddled with an American accent, something he doesn't pull off that successfully, despite Ronson, being Welsh. It's a small stumble that ends up foreshadowing ones that will follow. Wilton is a reporter, whose life is falling apart; with nothing to lose, he travels to the Middle East in hopes of covering the war. Instead of nightly news stories, he finds the equally broken, Lyn Cassady, a Crohn's Disease suffering, self-proclaimed, Jedi Knight. Intrigued by Cassady's odd behavior and convincing story, he follows Cassady into the desert for a conclusion that no one will see coming.


McGregor plays the role of Wilton with workmanlike efficiency. He serves as the viewer's connection to this very absurd and partially true story. Billed in advertisements as a farce, "The Men Who Stare at Goats," owes much of its laughs to the viewer reminding him or herself that some of this stuff is true. Cassady fills in Wilton on the details through flashbacks, which end up coming off as the film's most consistent sequences. Cassady's "Jedi Knight" skills come courtesy of psychic training in the New Earth Army, a top-secret, fringe branch of the government, founded by Bill Django (Jeff Bridges in an entertaining, but ultimately watered down version of The Dude) and funded by a kooky General (Stephen Lang). 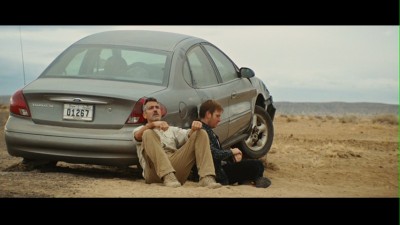 Clooney legitimately turns in a strong performance, that in reality, is far less George Clooney than his role in "Up in the Air." He plays the straight man in all scenes, whether it be dancing with comrades as part of training, defending himself and Wilton from insurgents with invisible knife techniques, or trying to bond with his newfound companion. These latter sequences have a lot of heart and Clooney conveys a sense of loss and depression quite convincingly. These feelings stem from events involving the film's primary antagonist, Larry Hooper (Kevin Spacey), the psychic "Sith Lord" to Django's "Jedi Master." The casting of Spacey is a double-edged sword. On one hand, Spacey is very adept at portraying an immoral snake, but the viewer expects this and unfortunately, due to a complete breakdown in the film's final act, predict everything that will happen. 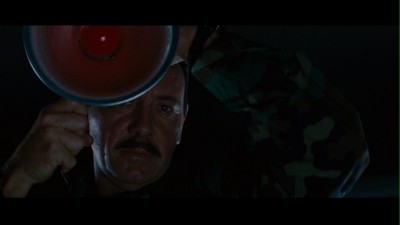 Yes, the film's final act is a mess. After so much buildup, things come to a screeching halt, with the introduction of some serious moral issues. The film becomes very preachy in an effort to be relevant, at the great cost of dating itself for generations to come. When the hole is dug so deep, the sitcom-esque resolution is a complete cheat on the audience, whether they realize it or not. To be quite honest, I was laughing throughout the film's final scenes, a testament to the quality of the actors, but when the credits were rolling and I thought about what I had seen, it was painfully clear that it was a giant cop out.


"The Men Who Stare at Goats" is an ultimately enjoyable film. Grant Heslov steers the helm with careful precision for the first two-thirds, setting up an absurd story to be a future comedy classic, but once that sad attempt at being preachy pops up, I'm reminded of all of Hollywood's prior, recent attempts to preach to me how evil the military can be. The viewer deserves better, because "The Men Who Stare at Goats" is a smarter movie than it's conclusion. In short, the gold medal promise painfully fades, and left in its place is a well-deserved, but bittersweet silver medal.


The 2.35:1 anamorphic widescreen presentation is a very pleasing, technically sound effort. Color levels appear most lifelike during the flashbacks to the roots of the New Earth Army, with flesh tones appropriately balanced amongst the greens of army fatigues. The present day sequences appear more intense , in perhaps, an attempt to accentuate the powerful heat of the desert. Contrast levels are steady, with proper amounts of detail emerging from shadows or dark rooms when necessary. Detail remains consistently strong as well, while no technical hiccups rear their head.


The English Dolby Digital 5.1 track is well balanced, showing warm life when one of the film's many classic rock songs takes center stage. Surrounds are appropriately used in the sparse, but memorable action sequences. Ultimately, this is a dialogue heavy movie, but no slouch in providing a pleasing aural experience. Spanish subtitles as well as English subtitles for the hearing impaired are included.


Anchor Bay has delivered some notable special features content, beginning with a pair of audio commentaries. The first is the film's director Grant Heslov rolling solo. Heslov delivers a by-the-numbers track covering the basics of how the film came to completion, but manages to remain engaging throughout. The second commentary gives the original author, Jon Ronson the opportunity to discuss how the film stacks up against the book; he also, fortunately, manages to remain engaging for his entire time on the disc.


Next up, two brief featurettes, "Goats Declassified: The Real Men of The First Earth Battalion" gathers some of the actual people involved with the events of the movie to discuss exactly what went on. It ends up making the movie a little more funny and sad, to know how some of these occurrences didn't stem from the mind of a writer, but also how the government threw money at nonsense.


"Project Hollywood: A Classified Report from the Set" is a glorified press featurette, full of talking head pieces with cast and crew regarding the production of the film.


A group of three character bios appear to be nothing more than alternate trailers, while the film's actual theatrical trailer and a segment of deleted scenes round of the remainder of the bonus features.

"The Men Who Stare at Goats" is a good movie, but not a great one. At it's best, it's clever, inspiring, sad, poignant, and funny, often all at the same time. Its ham-fisted conclusion is going to make you feel cheated, make no mistake. It's the type of ending you would think would have no possibility of being attached to the film that precedes it. At the very minimum though, the cast's solid ensemble performance keeps the spirit alive through thick and thin. To top things off, Anchor Bay delivers the film on a technically sound DVD that rewards viewers with substantial bonus content. I don't hesitate to say give "The Men Who Stare at Goats" a shot. Recommended.