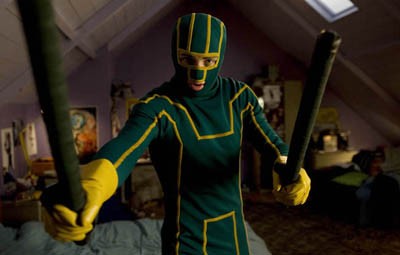 It's tough being a nerd in the modern world. Dave Lizewski (Aaron Johnson) will tell you. (In voiceover, no less.) His mom died, leaving him in a dull stasis with his old man. He gets mugged regularly when leaving the comic book shop. And Katie (Lyndsy Fonseca), the girl of his dreams, barely realizes she has a locker next to him. During one of his street-side shakedowns, Dave sees a man watching the robbery from his window and doing nothing. That's when Dave realizes this gawker isn't special, most people squander their lives just watching and doing nothing. If they are like him, that nothing time is spent reading a lot of comics about costumed do-gooders. So why hasn't anyone decided to be a crime-fighter for real?

Thus begins Kick-Ass, an adaptation of a comic book by Mark Millar and legendary artist John Romita Jr.* It's a smart idea. Over the last couple of years, there have been occasional news stories about oddball nutjobs dressing in costume and "patrolling" their cities looking for petty crime. Some of the deluded even signed on for the reality show Who Wants to Be A Superhero? But what would happen to Feedback if he really went out and started tussling with bad guys? Well, as one character opines about Kick-Ass, he maybe should change his name to Ass-Kicked, because it's him who is getting the beating.

Dave's initial attempt at crimefighting leaves him with a knife in the gut, and then he is hit by a car. (I am getting a little tired of the sucker punch shot of a car coming out of nowhere; it's become the cheap choice for quick shocks.) The resulting reconstructive surgery has left him with a metal-laced skeleton and damaged nerve endings, all the better to take more beatings. Dave is no better a superhero for it, but Kick-Ass can at least stand up to the punches now. An internet star is born.

To be honest, Dave doesn't really do much following that first viral video where he takes on some thugs outside a donut shop. His new life of engagement is no less pathetic than his old life. Some of that is by design, he will always be a loser. The major subplot to follow is that Katie thinks Dave is gay and he becomes her homo BFF. Some of the lameness is not by design, however, we're supposed to find Dave/Kick-Ass funny. He's not. He's a dud.

The good news, though, is that Kick-Ass is full of enough other colorful characters and exciting action sequences that the movie gets along without its main character just fine. Director Matthew Vaughn (Layer Cake, Stardust) and writer Jane Goodman have figured out what comics fans also sussed out pretty quick: it's all about Hit-Girl and Big Daddy. Big Daddy is a man with a tragic past who has decided to fight back, creating his own vigilante persona, and he has brought his eleven-year-old daughter along for the ride. Nicolas Cage takes on the Big Daddy armor, and the actor has pulled off another of his insane bravura performances. As a father by day, he is a total dork; as a hero by night, he's hilariously puffed up. Cage is obviously indulging his childhood fantasies of being Adam West. The impression is spot-on. 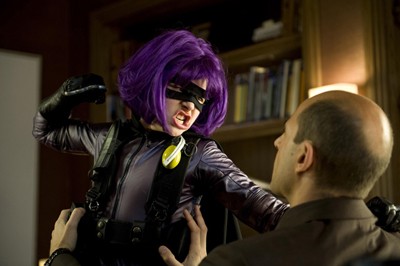 Even the mighty Cage can't stand up to little Hit-Girl, though. She is played by Chloe Moretz ((500) Days of Summer, Diary of Wimpy Kid). Hit-Girl dons a purple wig and leather schoolgirl's outfit and takes on the baddies with foul-mouthed bravado. Lightning quick, agile, and merciless, she cuts her way through a room of gangstas like it's just another day on the playground, pausing only to admire her handiwork and lob out a few smartass rejoinders. Backed by some truly inspired music cues, Hit-Girl runs away with the movie, leaving Kick-Ass in the dust.

The overall plot involves the heroes tangling with New York crime boss Frank D'Amico (Mark Strong, the villain in the recent Sherlock Holmes). D'Amico is a hard-edged mobster, though his son, played by Superbad's Christopher Mintz-Plasse, is another comic book geek. Surprisingly, Junior turns out to be useful when it comes to a real-life superhero scenario. He knows how these things work. He becomes the Red Mist to lure Kick-Ass into daddy's trap.

It's a fairly convoluted plot when you actually lay it all out, but Kick-Ass never gets bogged down by it. At a fairly tight 106 minutes, the movie moves through its narrative contrivances fairly efficiently. Cut a little more of Kick-Ass' teenage angst and you'd have a concise action picture with very little fat. A black comedy at heart, Kick-Ass is full of laughs, including lots of over-the-top violence that you know you shouldn't giggle at but you do anyway. Not everything works, naturally. Outside of Kick-Ass being too milquetoast, there are occasional asides, such as the lame animated comic book that tells Big Daddy's origin, that don't work at all. Vaughn tries a little too hard to prove his fanboy cred. Enough with the comic book references. The "Meanwhile..." captions and the superhero namedropping has done the job. I've never seen anyone work this hard to claim they are one of us since Ang Lee's Hulk movie.

I don't think Kick-Ass has what it takes to be a classic of the superhero genre. Without a charismatic central character, a la Iron Man, it's not going to have the same kind of revisit appeal. Still, the narrative here actually holds together better than the comic book series, even if the ending gets more ludicrous than the original. (It also has toned down the mean-spiritedness that makes the comics nigh unreadable.) Kick-Ass is kind of a side bet, a wink at the genre and the big game the masked men play. Which is fine by me, I had a lot of fun watching it. As an early springtime taste of summer, it feels good to be out in this kind of cinema sunshine.

* Romita is a hell of a nice guy, too. He drew a Kick-Ass cover for an issue of Liberty Comics I edited for the Comic Book Legal Defense Fund last year. (Full disclosure achieved!)