Alive Mind // Unrated // September 15, 2009
List Price: $24.98 [Buy now and save at Amazon]
Review by Chris Neilson | posted April 16, 2010 | E-mail the Author
Sarah Fisher's documentary about Buddhist teacher and ex-addict Noah Levine, Meditate and Destroy, answers a question I've long had. As a longtime non-believer in a god or gods who answer prayers, I've frequently wondered where atheist and agnostic alcoholics and drug addicts could turn for help overcoming their addictions when so much of the treatment available in the United States relies on the principles of the 12-step program. You see, six of those 12 steps explicitly involve acknowledging a higher power, confiding in God one's woes, and praying for divine assistance. While well-heeled addicts can turn to secular psychotherapy or other treatment options, where can working-class teens and young-adults turn for encouragement, I wondered; enter Noah Levine. 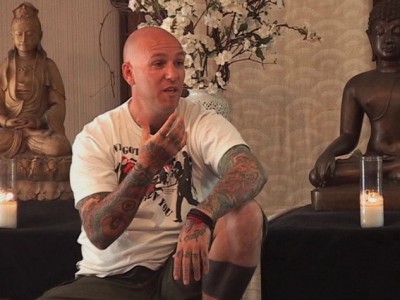 Born in 1971, Levine was raised by his mother in Santa Cruz, seemingly with minimal support from his father, famed new-age writer and meditation guru Stephen Levine. Seeing petty crime and drugs as punk rock, Noah Levine had numerous run-ins with the police before hitting rock bottom at age seventeen following a felony arrest, whereupon he kicked alcohol and drugs and took up meditation. Channeling his passions into proselytizing the virtues of the straight-edge lifestyle (anti-drinking and anti-drugging anyway, though Levine appears to still be a heavy smoker), he set to tagging his city with straight-edge graffiti before again nearly going to prison. Twice on the verge of long incarcerations, Levine again redirected his passions, this time to proselytizing a Buddhist-oriented approach to the 12 steps targeted at disaffected youth. Besides being a highly visible counselor to youth offenders and young-adult addicts, Levine has also published two books recounting his biography and promoting the virtues of Buddhism: Dharma Punx (2003) and Against the Stream (2007).

In her 2007 documentary, now available on DVD from Alive Mind Media, first-time filmmaker Sarah Fisher brings Levine and his message to a wider audience. Alas, while it's no doubt necessary to establish Levine's street cred to skeptical young people who could benefit from his experiences and message, Fisher devotes more than half the 81-minute runtime of Meditate and Destroy to stories of Levine's crimes and addictions, complete with poorly executed video effects including horrendous Second Life animation, and a parade of young people singing his praises. Had I not been watching the DVD for purposes of reviewing it, I'd have gladly fast-forwarded through most of the film's first half.

Fortunately, Fisher finally gets to the meat of Levine's message in the second half of Meditate and Destroy when she provides excerpts of him talking directly to incarcerated teens and young adults in recovery, and explaining his method on a local affairs TV program. Though these excerpts are highly edited, the basic message comes through. Levine teaches Buddhism's Four Noble Truths (Life is suffering; suffering is caused by craving; suffering can be overcome; and, there's a practical eightfold path to the cessation of suffering) which are themselves well suited to recognizing and overcoming addictions, and he further advocates a recovery method which blends non-theistic Buddhism with the 12-steps - in part advocating the insight and tranquility available through the Eightfold Path and Buddhist meditation practice together with the power of prayer, even if the prayer as ritual is divorced from a belief in a god or gods who can respond to such prayer. The impact of Levine's life story and message on the young people he works with appears genuine and significant, leading me to believe that Levine's message deserves the promotion that this documentary is intended to generate.

The audio quality of the 2.0 Dolby Digital track is also fairly good. Though some of Levine's voiceover sounds tinny and distant (perhaps recorded over the phone?), most of the audio is fairly warm and clear.

Extras:
An ample body of extras are provided including deleted scenes; extended live performances from the punk bands Good Riddance and Bold; interviews with Levine's teachers Jack Kornfield and Ajahn Amaro, and with his father and stepmother; a behind-the-scenes interview with Noah about his then forthcoming book Against the Stream, and best of all, more excerpts of Levine teaching.

Final Thoughts:
While first-time filmmaker Sarah Fisher wastes far too much time recounting Noah Levine's past as a criminal and addict, she ultimately does a fairly good job of presenting enough of Levine's advocacy to youth offenders and young addicts to justify the documentary as a whole. Although Fisher's presentation of Levine's teachings are too fragmented to entirely understand his approach and properly judge its efficacy, it appears that his method resonates with a sizable segment of the otherwise disaffected youths and young adults he speaks with. For that reason alone, Meditate and Destroy would make a valuable addition to the collections of schools, libraries, and youth outreach, treatment, and detention centers. Though it would be hard for counselors, teachers, or even teens or young adults to get much directly from the DVD that they could put into practice, it's likely to spur interested viewers to seek out Levine's books where I presume his message is more clearly articulated.