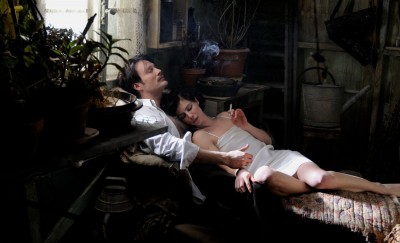 Sometimes, good things come
in threes; on other occasions, the third time is the charm. The
latter is certainly true in the case of Coco Chanel & Igor Stravinsky,
a strikingly good film by Jan Kounen. It follows the lifeless
made-for-TV Coco
Chanel, and
the stuffy Coco
Before Chanel

with Audrey Tautou. Unlike those two films, this one takes an
artistic plunge, unafraid to engage in intuitive, free-flowing artistic
interpretation, in what is ultimately a cinematic fictionalization of
a hazy period in the lives of these two towering cultural icons.

Working from a novel (and screenplay)
by British writer Chris Greenhalgh, Kounen opens his film with an extraordinarily
bold sequence: a recreation of the disastrous 1913 Paris premiere of
Stravinsky's ballet, The Rite of Spring. Chronicling
this event in incredible, dramatic detail, Kounen's roving camera
captures Stravinsky's (Mads Mikkelsen) backstage agony, the stoicism
of his doting wife Katarina (Elena Morozova), and the pleasantly perplexed
response of a noteworthy spectator, Coco Chanel (Anna Mouglalis).
Beyond a swift introduction of the three main characters with near-silent
efficiency, this remarkable sequence treats us to a good chunk of Stravinsky's
music, as well as Nijinsky's original choreography.

Unfortunately, the Parisian
audience does not take kindly to Stravinsky's supremely radical work.
The crowd erupts into a near-riot, and the performance is halted as
police rush in to contain the melee. Chanel, however, could not
be more impressed, and when she meets Stravinsky at a party several
years later, she invites the composer, and his wife and four children,
for an extended stay at her country home so that he is able to concentrate
on his work.

The sickly Katarina spends
enormous amounts of time in bed, diligently copying Stravinsky's scores.
Her husband and Chanel have an almost immediate, unspoken attraction
in which they are slow to indulge. But when they do, they don't
hold back. Although the pair attempts to honor some semblance
of discretion, Katarina is no fool. Yet despite the difficulties
caused by their ill-timed affair, Chanel and Stravinsky serve as mutual
muses over a period that is crucial and productive for them both.

The special force of this film
lies in its unhurried pace and intense focus on the actors. Wisely
keeping dialogue to a minimum (which reduces the soap opera factor),
Kounen elicits three stellar performances. Mikkelsen's Stravinsky
is a pressure cooker of erotic yearning capped only by a tenuous sense
of self-respect. As Chanel, Mouglalis is beautiful, austere, self-confident,
and wary of her own emotions. She embodies a rare poise rooted
in masked vulnerability. Elena Morozova is a dignified Katarina,
refusing to play a victim or to feign ignorance, or to give in to Chanel's
"mannish" sense of superiority; Katarina is, ultimately, despite
her husband's failings, his savior.

This is the third Chanel film
in two years, and it wisely abandons the usual transparent bio-drama
fussiness over historical "accuracy," and instead finds richer emotional
truth in what is a factually speculative story. Kounen blends
a grounded approach to his characters with a classy technical sensibility
and marvelous editorial craftsmanship. Coco Chanel & Igor
Stravinsky doesn't just do the other Chanel films one better;
it stands alone as an exceptional achievement.