Slavoj Zizek: The Reality of the Virtual

Olive Films // Unrated // April 24, 2007 // Region 0
List Price: $29.95 [Buy now and save at Amazon]
Review by Chris Neilson | posted September 22, 2010 | E-mail the Author
With all due respect to Cornell West, if any philosopher today approaches the level of celebrity necessary to be an international household name it's the 61-year-old Slovenian professor Slavoj Žižek. The author of 58 books and countless articles, he's such a celebrated phenom that there is even an International Journal of Žižek Studies dedicated to critically dissecting his theories. But Žižek's fame isn't limited to the world of print. He's also appeared in more than a dozen documentaries including Zizek!, The Pervert's Guide to Cinema and Examined Life. The modest success of these three documentaries on DVD apparently has prompted Olive Films to bring Slavoj Zizek: The Reality of the Virtual to DVD as well, albeit seven years after it was recorded.

Produced, directed and edited by Ben Wright, The Reality of the Virtual was recorded on a single day in December 2003. Purportedly made for around £7,000 (about $11,000 US, today), it is the ultimate talking-head doc: The Reality of the Virtual features Žižek sitting at a library table for the entire 71 minutes. With no interviewer, voiceover, graphics, or change of scenery, this monologue is essentially a recorded lecture intimately directed to the viewer, but it's not nearly as stuffy in presentation as this description may sound. Despite the static camera and other limitations, Žižek delivers in the animated style for which he is famous -- a haggard, bear of a man, Žižek rocks, twitches, sweats, squints, and gestures emphatically, as he delivers his English-language monologue in a warmly modulated, east-European accent. 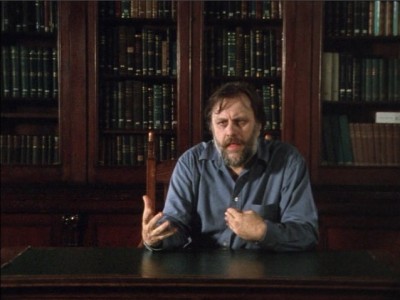 Žižek's topic is not so-called virtual reality, but literally the reality of the virtual by which the real-world effects of causes, which are themselves not of the real world, are experienced. Extending Jacques Lacan's psychoanalytic triad of the imaginary, symbolic and real, Žižek adds a virtual/real dichotomy, thereby distinguishing five categories: the imaginary virtual, the symbolic virtual, the imaginary real, the symbolic real, and the real real. Žižek quickly passes through the first four categories to focus on the fifth, the real real, but in brief, the imaginary virtual allows us to remove by abstraction those features of people we interact with which are too embarrassing to keep in mind such as their excrement, urine, and sweat; symbolic virtuality are those beliefs that ideally operate at the level of abstraction, but which appear bizarre or idiotic when made too concrete, for example beliefs about patriarchal authority or Christmas; the imaginary real constitutes images which are too strong to be confronted directly -- these fears underlie the popularity, for example, of post-apocalyptic fiction and monster movies; and the symbolic real which includes experientially provable scientific formulas that defy reduction to virtual symbolism, such as quantum physics.

Žižek's fifth category, the real real, is sub-divisible into surface and textural levels which are antagonistic with one another. To illustrate this, Žižek uses cinematic examples from Woody Allen's Love and Death, Robert Altman's Short Cuts, and Robert Wise's The Sound of Music, as well as former U.S. Defense Secretary Donald Rumsfeld pronouncement about known knowns, known unknowns and unknown unknowns, to which Žižek adds unknown knowns. The real real consists of known knowns and unknown knowns. For example, in The Sound of Music, at the narrative or surface level, the known known is that the protagonists are democratic Austrians resisting Nazi occupation, but claims Žižek at the textual level, the unknown known is the opposite: the hearty, blond, agrarian anti-intellectual Von Trapps are really the archetypal fascists, and the smaller, dark-haired, effete, cosmopolitan, decadent, intellectual Nazis are really stereotypical Jews. According to Žižek, The Sound of Music was wildly popular because it satisfied its fans' surface desire (known known) to identify with anti-fascism, while also satisfying their unconscious desire (unknown known) to embrace fascism.

In further exploring the antagonism between surface and textual reality, Žižek addresses the war in Iraq, the upending of Freudian psychoanalysis, Einstein's revision of his original space-time theory, distinctions between a universal modernity and discrete modernities, the ethical implications of theism and atheism respectively, classical ethics of moderation versus modern ethics of limitless consumption, the intolerance of tolerance in liberal societies, classical utopianism contrasted with radical utopianism, Andrei Tarkovsky's cinematic representation of religious faith, Richard Nixon's trip to China, and much more; all in 71 minutes!

Presentation
Video & Audio:
Presented in full frame (1.33:1) from a PAL-to-NTSC transfer, Slavoj Zizek: The Reality of the Virtual suffers from ghosting and poor resolution attributable to video interlacing. 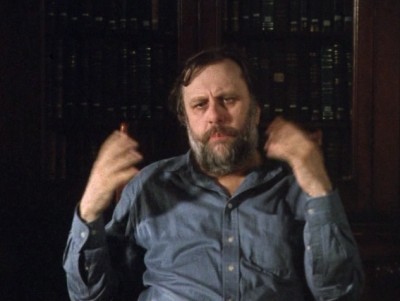 The 2.0 audio is adequate with Žižek always understandable despite noise on the set and on the outside street. No subtitles are offered.

Extras:
The only extra provided is an essay by literature professor Stathis Gourgouris which is readable by clicking through 45 screens of text on the disc or via PDF file on a PC, though a booklet would have been preferable.

Final Thoughts:
Slavoj Zizek: The Reality of the Virtual is essentially a frill-free 71-minute lecture recorded seven years ago. Though viewers, especially cinephiles, looking for an introduction to Žižek would do better to check out the far more polished and accessible The Pervert's Guide to Cinema before seeing this, fans of professor Žižek will not be disappointed with this engaging release.

Though the $29.95 MSRP seems unduly steep for this low-budget production, Slavoj Zizek: The Reality of the Virtual is recommended.