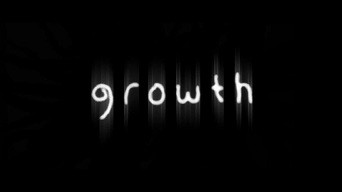 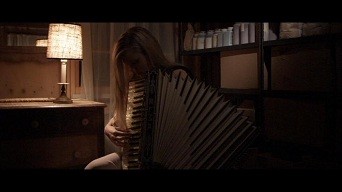 Home video distributor Anchor Bay recently released Growth, a low budget creature feature with an obligatory garish cover art and a generic tagline. This is the type of title that seems to show up on store shelves and online queues for about a month and then fades into oblivion. Having written for DVD Talk long enough, I have to admit that my hopes were not raised by this product. But while I can't say it's a particularly great moment in direct-to-video horror filmmaking, Growth is surprisingly engaging despite its flaws.

In Growth, writer and director Gabriel Cowan envisions a place called Kuttyhunk Island, surrounded by seawater and located - apparently - off the coast of Maine. Kuttyhunk Island is home to a research facility that makes a breakthrough in parasite development. The nonsense story has these slick little buggers inhabiting human beings, increasing their senses and heightening their intelligence. Unfortunately, these benefits are short-lived, as the critters also cause madness and death. Oh, and they dissolve into nothing in saltwater, hence the importance of being contained on an island.

This all occurred 20 years ago; at the start of the film, it is present day and Kuttyhunk Island's inhabitants have somehow formed a tight-knit community that doesn't much appreciate outsiders. That's unfortunate for our gang of protagonists, the requisite group of good-looking young people who make their way to Kuttyhunk Island to help their leader, Jamie (Mircea Monroe), clean out a family member's house. The gang includes Jamie's suitor Marco (Brian Krause), her stepbrother Justin (Christopher Shand), and her friend Kristin (Nora Kirkpatrick), who plays an accordion (which, if anything else, is certainly novel). Needless to say, parasite mayhem quickly ensues - with cell phones out of service area, of course.

For as silly as the setup of this film is, Growth is a surprisingly interesting entry in this horror sub-genre. It feels like a combination of Cabin Fever and last year's Ghost House Underground entry The Thaw. I credit the rather large cast of secondary characters that help give the island some depth, even if their strange goings-on aren't always explained in the film's breezy 90 minute run-time. The main cast is also solid: Cowan managed to rope together an experienced group of young actors and they all seem natural on the screen. I especially thought Nora Kirkpatrick was effective in playing her role, a quirky and slightly obnoxious girl who is in love with Jamie's dour stepbrother - and awkwardly unsure of how to express this despite the confidence that her good looks must engender. Kristin was a well-conceived character, and nicely played by Kirkpatrick.

What's frustrating about the film, though, is its uneven pacing and lack of humor. Justin is the first main character to get "infected" by the parasites - and the film spends way too much time demonstrating the results of this infection. The script contrives scene after unnecessary scene illustrating his heightened senses and increased strength. It's an important plot point, yes, but Cowan should have given the audience a little more credit with their intelligence. I also thought Growth would have been more effective if it had a tongue-in-cheek approach. It's ultimately a rather silly concept, so why not have a little fun sprinkled in through the scares?

Still, Growth is worth seeking out by horror film fans. The strong cast and the plentiful appearances by the parasites (not quite convincingly rendered via CG effects, but good enough to pass muster for a B-movie) make up for the issues in the script. Given Anchor Bay's generous extras (more on these in a bit), Growth comes recommended. 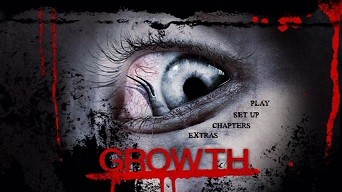 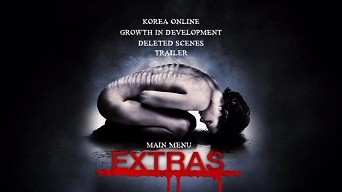 Anchor Bay gives Growth an anamorphic widescreen presentation in a 2.35:1 aspect ratio. Colors might seem a tad muted, but the image overall is sharp and detailed.

The lone audio track is an English language Dolby Digital 5.1 affair. Overall, the sound quality is quite good with a dynamic range. Dialogue is always clear and well-represented. Optional English language subtitles are available for the deaf and hearing impaired.

For a low budget horror film, Anchor Bay has surprisingly filled its DVD release with plenty of extras. To begin with, trailers precede the main menu for Stripped Naked, Abandoned, Spartacus: Blood and Sand, The Disappearance of Alice Creed, and the remake of I Spit on Your Grave. There's also a spot for UFC DVDs.

More significant are two feature-length commentary tracks. The first is with writer and director Gabriel Cowan and producer Amiee Clark. The second is with castmembers Mircea Monroe, Brian Krause, Christopher Shand, and Nora Kirkpatrick. A random sampling of each suggests both tracks are casual and informative - with the latter being more lively, possibly because it has more participants.

In addition, an Extras sub-menu offers access to a trailer for Growth and quite a few Deleted Scenes (15:27). It also houses two short featurettes: Growth in Development (6:00) and Korea Online (6:14) examine the making of the film and are interesting but too short. (By the way, the film's ending is set in Korea, hence the extra with Korea in its title.)

Growth has some issues with pacing - and believability, though given the genre that's almost a given - in its script. However, a strong cast (including an especially good performance by Nora Kirkpatrick in a main supporting role) and plentiful CG parasite mayhem make the film worthwhile for the horror crowd. Factoring in the plentiful extras in Anchor Bay's DVD release, Growth comes recommended.