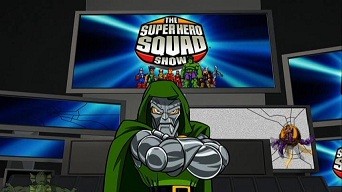 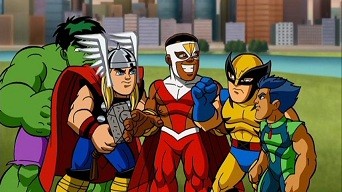 I grew up on Marvel comics - and to this day, it still amazes me how the company's superheroes have exploded in the popular culture imagination of the early 21st Century. I read the exploits of the X-men, the Fantastic Four, and Spider-man in 22 page newsprint installments long before the countless films, TV series, books, and product tie-ins of these recent years. And while I'm no hardcore fan, I still enjoy catching an X-Men film or a Spider-Man cartoon every now and then.

The Super Hero Squad is just one current cartoon incarnation of Marvel's stable of colorful characters. It's a weekly series that airs on the Cartoon Network, offering a kiddie 3 Stooges-ish slapstick take on the Marvel universe. The core group of heroes is composed of simplistic versions of Iron Man, Wolverine, Silver Surfer, Hulk, Falcon, Reptil, and Ms. Marvel. An equally simplified Dr. Doom leads a cadre of villains including the Mole Man and MODOK. Each episode also features appearances by other Marvel characters. If you're an old school comic book reader, think of the 1980's Peter Porker: The Spectacular Spider-Ham spoof without the anthropomorphism. My fellow DVD Talker Francis Rizzo III reviewed the first volume or this cartoon here if you'd like some additional context for the show. I've been sent the second DVD volume, subtitled Quest for the Infinity Sword!, for a look-see (although, for full disclosure, Rizzo has already written a nice review of this volume as well for our site here).

As a fan of the Marvel heroes in my childhood, I was looking forward to checking out The Super Hero Squad and its obvious comic slant on these heroes. However, I have to admit being a bit disappointed with the results here. Yes, the premise is amusing - and there are some nice humorous moments. I especially liked episode title sequences that include faux comic book covers and ongoing gags like Thor's egotistical comments about his appearance.

The novelty wears thin quickly, though, and like a lot of cartoons, the action and storytelling become repetitious when the episodes are viewed one after another. Young kids would clearly like the antics on display here, although parents should be warned of a few less-than-endearing character traits, namely the Mole Man's tasteless ability to pass powerful fart bombs (just imagine little ones trying to imitate this power) and Ms. Marvel's borderline hysterical criticisms. The latter being unfortunate because in several episodes she's the only female heroine.

All in all, I'd suggest a rental if you're curious about the show (although if you haven't seen the first volume, check that out first). Personally, I much preferred the breezily whimsical The Spectacular Spider-Man, a contemporary weekly cartoon based on the Marvel Universe that did a better job of offering humor and action that both kids and adults could enjoy. At least it didn't resort to barfs and belches for a laugh like the second episode in this volume of The Super Hero Squad Show does. 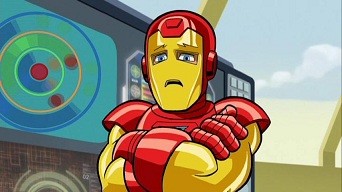 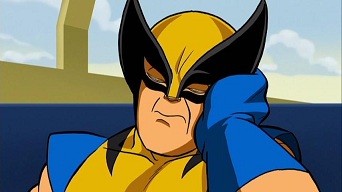 Six episodes comprise this disc: From the Atom . . . It Rises, Night in the Sanctorum, This Forest Green!, O Captain, My Captain!, If This Be My Thanos!, and Deadly is the Black Widow's Bite!

The episodes were originally broadcast as part of the first season - and one wonders if, once Shout! Factory has released all the episodes in piecemeal volumes, a season set would be forthcoming - or even a blu-ray collection. For this reason, unless you've got kids dying to own these cartoons right away, I'd suggest holding off to see what the future holds for this series on the home video market, especially considering that it's proven successful enough to warrant a second season. 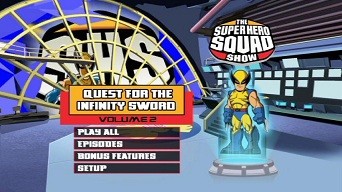 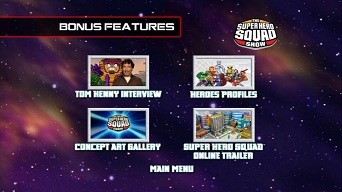 The Super Hero Squad Show looks very sharp on DVD. Of course, modern animation typically does. Colors are vibrant, and details are sharp. The widescreen image is anamorphic.

Two sound options are available on this disc: Dolby Digital 2.0 and Dolby Digital 5.1. Both are English language. The latter is the version I listened to, and no complaints can be made about it. The mix is appropriately dynamic - and loud. The disc, however, does not appear to offer subtitles.

Tom Kenny Interview (2:13) has the actor who plays Iron Man, Captain America, and MODOK give a few brief comments spliced together with scenes from the show itself.

Heroes Profiles is a navigable text-based slideshow of character profiles for Silver Surfer, Ms. Marvel, Reptil, Captain America, Hulk, Thor, Iron Man, Wolverine, and Falcon. Concept Art Gallery is a similar slideshow with working art for the series. These are actually the best of the slight extras on the disc.

Super Hero Squad Online Trailer (0:48) rounds out the extras. It's basically a commercial.

Young kids would undoubtedly get a kick out of the juvenile antics of The Super Hero Squad. Some of the cartoonish humor works, but some of it borders on the obnoxious. If you're a fan of the series, you might want to hold off until future DVD volumes have been released, as a season set may be in the cards given the home video release cycle of similar cartoon shows like The Spectacular Spider-Man.