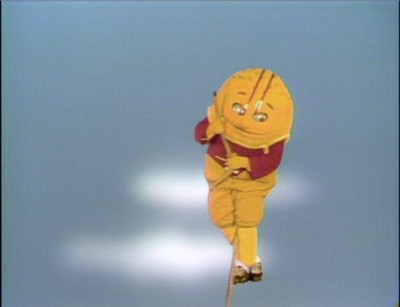 Picture if you will, a late September Saturday morning in the early 1970s, maybe about 6AM. You wake with joyful excitement, slip out of bed and pad into the TV room in your footie pajamas. You don't want to - and there's not much worry of - waking your hung-over parents, as you sneak back out into the kitchen to pour a huge bowl of Cocoa Crispies. You go back to switch on the TV, and, there to confuse and beguile you in-between all the animated goodness, are the live-action monstrosities known as Sid & Marty Krofft shows. Endlessly fascinating and secretly repellent shows like H.R. Pufnstuf and Wonderbug pretty-much rule the airwaves, while your sugar-addled mind doesn't even begin to question why.

Unless you're the type of DVD-collecting nostalgia junkie who salivates at the thought of a complete series collection of Nanny and the Professor, Sid & Marty Krofft's Saturday Morning Hits is a good place to begin your '70s-Krofft queries. Just what is it about these shows that made them seem so magical and somehow forbidden? Beyond the novelty value of using live actors - a crafty, money-saving move that also made these shows seem just like those weird dramas your parents watched at night, what's the secret ingredient? Is it pathetically slow-paced, juvenile writing; the worst special effects imaginable - then and now, or the hideously disturbing character designs? Well of course it's all three of these things, forming the triumvirate of childhood repulsion/attraction! I mean, why do you think kids talk about boogers so much?

As an adult, will you enjoy these offerings with fondness or vague discomfiture? You're lucky you can rent this collection before dropping deadly dinero on H.R. Pufnstuf: The Complete Series Collection (the upcoming release of which includes a Pufnstuf bobblehead doll), Because the Pufnstuf oeuvre numbers among the scariest things ever created for kids. As Witchiepoo and her giant orange tarantula caper madly through trees-with-faces - adults in costumes staggering lamely about a garish soundstage - you'll be desperately reaching for your own magic flute or tumbler-of-vodka-and-valium combo in order to deal with the flood of scary memories.

I'm half-convinced that as a child I watched these shows less for entertainment value, and more because I was simply frozen in fear. At any rate, let's see what you get in this sampler:
H.R. Pufnstuf - "Showbiz Witch" In which Witchiepoo hopes to steal Freddy Flute (what's new) while Jimmy and friends try to hold a preemptory talent show.
Bugaloos - "The Great Voice Robbery" British Bug Band (for real), the Bugaloos contend with The Bigmouth (Martha Raye) as Benita Bizarre, an old-school songstress who wants a taste of Bugaloo fame.
Sigmund & the Sea Monsters - "Make Room For Big Daddy" One of my personal faves from the Krofft catalog - a weird riff on Cinderella and 'The Boy Who Cried Wolf' or something - in this iteration Sigmund's horrifyingly abusive father and brothers bust their way into human Johnny Whitaker's clubhouse to watch TV.
Lidsville - "Mark & The Bean Stalk" This time the Kroffts torment us with Butch Patrick (The Munsters) as an unfortunate lad stranded in a world full of mostly malevolent hats. Yes, hats. Hoping to escape via a giant beanstalk, Patrick runs afoul of Charles Nelson Reilly.
Electra Woman & Dyna Girl - "Ali Baba" If I have any fantasies of lipstick lesbians in spandex, it's this show that's responsible. Originally part of the Krofft Supershow, here we get two 15-minute episodes featuring the evil Ali Baba and Sid Haig as the Genie. At stake is a potion that could make our Heroes act opposite their true nature. Hubba hubba!
Wonderbug - "Go West Young Schlepcar" and "Schlepnapped" Possibly the most bereft of all Krofft productions (and another favorite of mine), here we get another two 15-minute episodes from the Supershow, featuring a trio of wisecracking teens and their junky dune buggy, a magically equipped dune buggy that (if the truly low-rent effects are to be believed) can turn into a flying hand puppet. There's a wisecracking black guy, a nerdy white guy, and a hot white girl that no one ever listens to. If any Krofft production deserves a big screen reboot, it's this one.
Bigfoot & Wildboy - "The Space Prisoner" Right in the credits our characters run and jump straight at the screen glaring menacingly. It sets a rough-and-tumble tone perfect for the naïve ten-year-old. Then they try to save some professor from Richard Moll in yet another evil incarnation.

These episodes all suffer from leaden sit-com timing, and are suffused with oddly placed, utterly inappropriate laugh tracks. I'm not sure how it's possible to maintain such a manic pace while maintaining leaden timing, too, but somehow these shows manage. It's difficult to form any sort of attachment to any characters, either, except for that lovable Sigmund (IMDB indicates a big screen version is in development, so I guess I'm wrong again ...). And with villains and guests assayed by the freaky likes of Moll, Nelson Reilly, Haig and Raye, it seems like common sense that none of these shows lasted more than two seasons. It also seems like common sense that the Krofft generation turned into a bunch of paranoid, apathetic adult-children - insane to the very last one.

Video:
The seven episodes collected on the two-and-a-half-hour disc are presented in a muzzy 4 X 3 ratio, preserving their OAR. Sadly, much here looks a bit shabbier than it did in the '70s, likely due to initial low production values as much as degradation due to disrespectful archiving. Often soft and fuzzy, but with occasionally bright colors, images don't betray much in the way of digital artifacting or compression problems, just the wear of living a hard life.

Extras:
Extras are limited to a 50 Years of Krofft Art photo gallery with 25 stills of production design art and other bits of interesting ephemera. It's a nice, but very lonely extra.

Final Thoughts:
Sid & Marty Krofft shows have superstrong nostalgia value for those bringing in the good middle-aged bucks currently. Yet upon revisiting these nightmarish shows (none of which lasted more than two brief seasons) one wonders how it was possible for the Kroffts to have dominated Saturday mornings for almost an entire decade. Scary characters, freaky production values, mania and lethargy frolicking hand-in-hand; These are the things that pull naïve kids in, while not-so-subtly insisting they shouldn't be watching. Too bad it doesn't really work from an adult standpoint. Hardcore nostalgia buffs will take what they can get, but if you're not quite sure, Rent It first.