Two Films by Marc Isaacs: All White in Barking / Men of the City 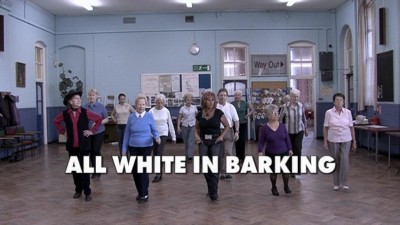 Made for Storyville, the BBC near-equivalent to PBS's Independent Lens, All White in Barking (72 min., 2007) and Men of the City (58 min., 2009) provide revealing portraits of common Londoners.

When the working-class London borough of Barking briefly made the news for electing far-right British National Party (BNP) candidates in 2006, the British media generally sensationalized the story of a declining white population resisting the demographic transformation of immigration, but from the same source Marc Isaacs crafted a poignant portrait of earnest people in trying circumstances - older whites alarmed that their neighborhood is rapidly changing, and younger immigrants seeking to establish new lives.

Neither an agitator in the Michael Moore tradition or a fly-on-the-wall observer like Frederick Wiseman, Isaacs continues in the extraordinary vérité style of his early work. In All White in Barking, Isaacs displays his remarkable talent as an interviewer capable of setting his subjects at ease. His gently probing questions bring out the typically "politely" muted racism of his white subjects -- "everybody prefers to live with their own kind" -- without either vilifying them or excusing their prejudices.

By following his principal characters over the course of months, Isaacs achieves a rare level of intimacy with his subjects bringing out details not immediately apparent even to the subjects themselves: for example, Dave, a retired householder who volunteers for the BNP and fears immigration, has a mixed race grandson, and yet fails to notice that his younger daughter's boyfriend is mixed race. Isaacs also becomes involved in his subjects' lives in ways that cross the boundaries typically expected of documentary filmmakers: for example, bringing an obliviously racist couple together with an immigrant Muslim family for reciprocal homemade meals replete with numerous cringe-worthy moments.

Men of the City, the lesser of the two films, attempts to be both more grand and more conventional than Isaacs' prior documentaries. Here Isaacs follows men who work in and around London's financial district during the lows of the 2008 market crash. As ever, Isaacs finds the extraordinary in the commonplace -- a street sweeper on a spiritual journey, an unskilled immigrant and sole parent trying to raise his daughter as a conservative Muslim, but losing her to western pop culture; and, a hedge fund trader, who'd have been happier as photographer and regular family-man.

Where Men of the City falls short of Isaacs' prior work is in using extraneous footage, and heavy-handed music and editing to shoehorn his documentary subjects and their lives into archetypes and narratives that verge upon cliché. Hopefully, Issacs will return to his less deterministic approach with his future work. 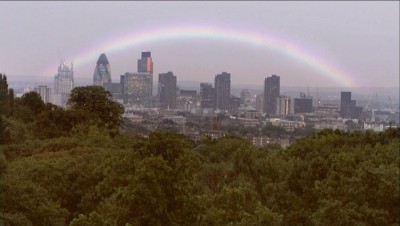 Presentation
Two Films by Marc Isaacs has been released on a single dual-layered DVD which is PAL-encoded but not region restricted.

The stereo audio is in keeping with the video -- acceptable given the limits of the original recording conditions. The dialogue is intelligible, and recording noise is minimal.

No subtitle options are provided.

Extras:
The extras consist of a 15-minute video interview with Nick Fraser, series editor for BBC's Storyville, who commissioned these documentaries and a booklet with liner notes and an article by film critic Noel Megahey. Both Fraser and Megahey cover Isaacs' work both generally and with emphasis on these two films.

Final Thoughts:
Though not as uniformly excellent as last year's Three Films by Marc Isaacs, this release is still definitely work seeing. Isaacs is a remarkable documentary filmmaker with tremendous talent. I look forward to seeing more from him.