Breaking Glass Pictures // Unrated // January 4, 2011
List Price: $21.99 [Buy now and save at Amazon]
Review by Cameron McGaughy | posted April 10, 2011 | E-mail the Author
"It was the first time I had worked with 30 cast and crew. Within a few days, I wanted to kill them. So, I decided to write a movie. I gave them all the same names and positions and killed them off in brutal ways. It was the easiest thing I ever wrote..."
- director Israel Luna, on his experiences on a film set leading to the inspiration to Fright Flick 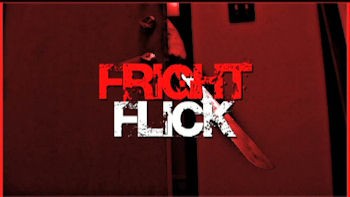 The Movie
Having gotten his groove on with the campy Ticked-Off Trannies with Knives and the gay sex-centric R U Invited?, director Israel Luna plays it straight (well, sort of) with Fright Flick. This ode to slashers bursts with boobs and blood, but I guess "straight" is a relative term when you consider that the film also features a queeny cosmetics crew member named Missy (yep, it's a dude!) who tries to hijack his few spotlighted scenes with diva-like diatribes. But outside of a few other wink-wink moments and references to Madonna's Immaculate Collection, the Dreamgirls soundtrack, Whitney Houston and Margaret Cho, this effort certainly shouldn't be burdened by the "gay film" label--one that unfortunately often proves to be limiting.

Luna is clearly influenced by films I love--the Golden Age of the slasher is well-represented here, and you'll have to decide for yourself whether certain sequences are lazy rip-offs or loving homage. I reside in the latter camp, and any filmmaker that pays tribute to Friday the 13th and Halloween II (the awesome Rick Rosenthal one, not the annoying Rob Zombie one) in the same sequence is a pretty cool dude in my book. Luna (also the writer, sharing a story credit with cast member Todd Jenkins) is also a fan of the Scream franchise and it's fellow self-aware flock: Fright Flick mentions "rules" and shares the Hollywood skewering sensibility that infused Scream 2 and Scream 3 (perhaps the film it has the most in common with given the on-set mayhem in store). 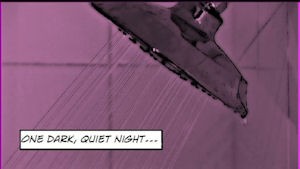 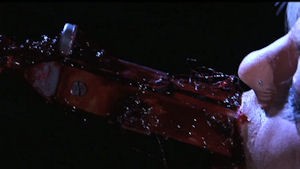 On the set of an awful slasher shoot, a buxom blond bimbo soon meets her demise (for real) behind the scenes. Two years later, the second sequel to that film is being shot as much of the motley crew and cast returns. Presiding over the film is lecherous director Moureau Laurent (Richard D. Curtin), an all-around asshole ("You're blocking my wind...") with an air of self-importance and a flexible sexuality and a pretentious ponytail that reminded me of (a more portly version of) the Radioactive Man director from The Simpsons (perhaps another of Luna's passions, which would make me love him even more). At his side is put-upon producer Jenkins (writer Todd Jenkins...don't get confused!), who we soon learn (suspect alert!) has a chip on his shoulder over a stolen script. 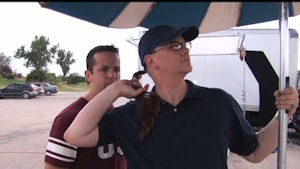 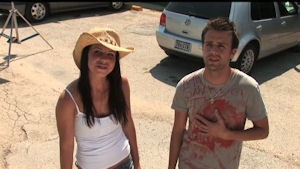 They are joined by a large group of soon-to-be victims/suspects, including co-writers Kat (Whitney Blake) and Chad (Tom Zembrod); production assistant turned assistant director Eddie (Jon Paul Burkhart, whose role as "Pantomime Horse" from an episode of Parks and Recreation has to be one of the coolest credits ever), who gets a promotion (motive alert!) after poor Kenny (Dan Forsythe) meets an untimely demise before making it to the set; leading man Brock (Chad Allen) and his girlfriend Angela (Daphne Khoury), who would do anything to get the leading lady roles (see a pattern here?) and gets particularly pissed off with the arrival of Ophelia (Valerie Nelson), another buxom blond bimbo who benefits from the adoration of horny producer Mr. Wellington (Jim Dolan). 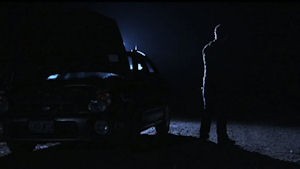 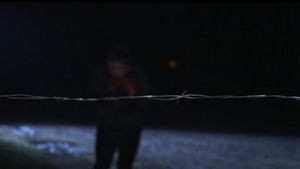 In this world of wackos walk three relatively well-adjusted crew members who seem to maintain a degree of sanity and sensibility: "Eye Candy" (Natalie Jones), a wannabe actress who bides her time as the resident slate slapper (which proves to be a surprisingly arduous task given the "acting" ability she's dealing with: "Scene 46, Take 29...") and our "final girl" in training; her cousin Ryan (Tyler Brockington), a new production assistant quickly annoyed with his totem pole standing and requisite abuse (motive alert, take 10!); and handsome Gill (Adam Kitchen), the new behind-the-scenes guy who sets a few hearts aflutter. While we initially feel comfortable with this trio, we may start to question their intentions. 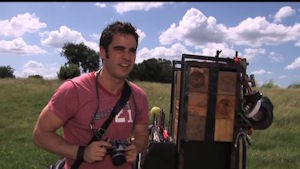 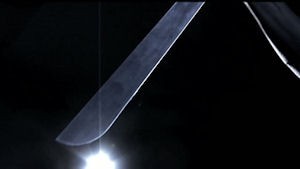 Along the way, we learn a little more about the tempestuous relationship between Laurent and Jenkins--and about the death of Debbie (Jennifer Garner), who may hold the key to the mystery. Complicating the chaos is the "secret" script of writers Kat and Chad, an effort that may be coming closer to reality than they had intended (or did they?!); and a handful of supporting players that may or may not be unassuming as they seem--including a love-struck librarian (Melissa McCurley); an eager-to-please Chamber of Commerce rep (Allyn Carrell); a curious innkeeper (Tushar Mali); an overall-wearin', knife-wieldin' handyman (Mitchell Self); and that drama queen Missy, a.k.a. Chase (Charles Baker), in a never-ending argument with his ex Missy (yes, also a man...played by Toni Jefferson). 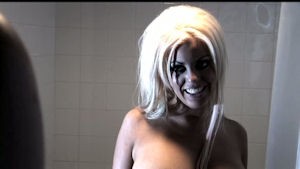 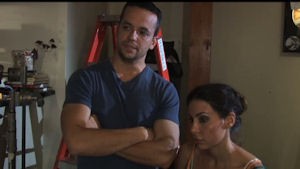 Despite my aforementioned comparisons to Luna's other works, Fright Flick does maintain a level of camp--but mostly seen in the "movie within a movie" shoots, often hysterical scenes that I wish there were more of: including Donna's discovery of her boyfriend's body in the opening scene (squeeze those breasts together, babe!); a conversation in a vintage car (perhaps another of Luna's loves, they make many appearances) where Angela adopts an accent; and Ophelia's soliloquy, where she rambles on about darkness and her daddy (who molested her "anus-ly and vagaina-ly", a line helped by Chad Allen's pantomime). And is there anything funnier than a bloody boner gag?! 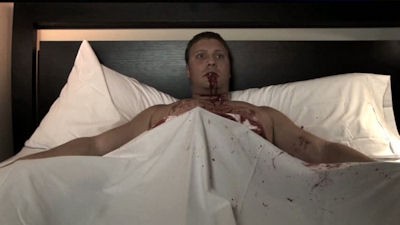 The humor within the bigger movie isn't as sharp as it could be, and a few scenes prove to be mistakes: Chase's "Christ on a kosher cracker!" speech--much like a similar out-of-place scene that marred the otherwise enjoyable R U Invited? (both apparent attempts to appease a demographic)--is too distracting, with Baker's overall performance too over-the-top for his (and the film's) own good; and a late appearance by innkeeper Kumar interrupts an otherwise tense scene. Many of the other throwaway jokes revolve around blue material (equating testicles to Hostess Ding Dongs!), but most of them just aren't witty enough to be memorable (the G-rated librarian doesn't fare any better: "What the Dewey Decimal System?!"). 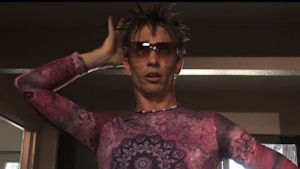 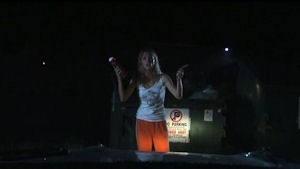 Thankfully, Fright Flick takes itself just seriously enough to be categorized as a slasher film, albeit a really low-budget one infused with comedy and limited by bargain-basement effects, cameras and (in some cases) cast members. Yeah, the story and the characters are silly, but Luna tightens the screws just enough when it counts. After the fun opening sequence and the requisite character introductions, red herrings and early kills (including a cheap but still gnarly use of barbed wire...ouch!), the film finds its groove in the final third as the tension starts to mount and various character arcs come together. I was pleasantly surprised with the flow Luna is able to maintain--low-budget horror usually falls apart when speed and choreography are required, but (for the most part) Fright Flick does okay. 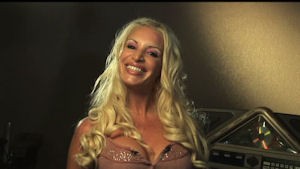 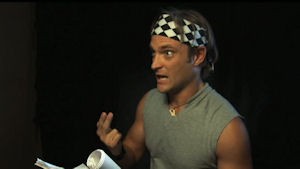 Sure, we've seen it all before (hmm, is that tape a joke or a real snuff film?) and little of it makes sense: I was particularly perplexed by one major flaw during the "reveal" speech, while another major question about a missing body had me scratching my head. But since when did slasher films make sense? Fright Flick is fun enough to keep you interested. It also has a few tricks up its sleeve, changing a role on us when I wasn't expecting it and giving us enough cool carnage--even though the budget mostly limits us to post-impact effects shots (which makes one late-kill, an especially vicious and well-done scene, all the more violently jarring). 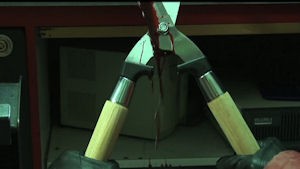 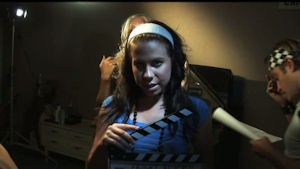 The acting is a tale of two camps, with most of the bigger roles filled by the more capable performers (more Chad Allen, please!); that makes me a little miffed that the last scene is left in the hands of less-capable thespians, but you still gotta love that random final shot that doesn't make a lick of sense (sort of reminded me a little bit of Friday the 13th Part 3, even though it totally set itself up to pay tribute to the most popular scene from Friday the 13th Part 2...wow, I need to get a life, huh?). You can see bits and pieces of other famous horrors along the way (The Burning! Texas Chain Saw Massacre!), which is part of the fun, too. 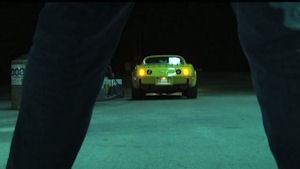 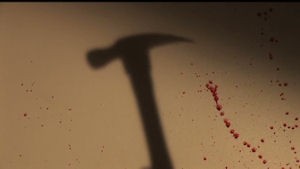 Viewed with the right frame of mind and expectations, Fright Flick is an entertaining effort--but some viewers probably won't enjoy it as much as I did. Still, you gotta respect Luna's love for the genre and the style he is able to show with limited resources--including those cool comic book "page flip" effects connecting scenes, an effect that reminded me of Homer Simpson's eager over-use of the "star wipe" while creating Ned Flanders' dating video:

Lisa: "Dad, there are other wipes besides star wipes..."
Homer: "Why eat hamburger when you can have steak?"
Lisa: "...I'm taking my name off this thing." 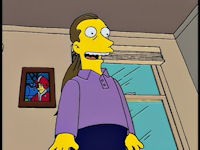 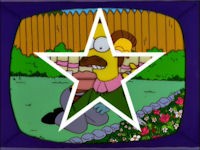 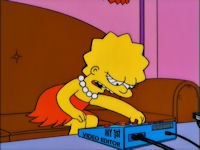 Wait...Luna likes comic books, too?! Men, The Simpsons, horror films, comic books...is he me in disguise?! He must be really, really good looking... 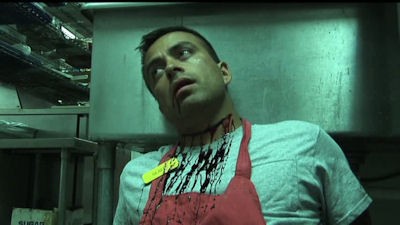 Video/Audio:
The disc provided for this review was a screener, so I'll refrain from final ratings until a final pressing is received. Overall the anamorphic widescreen was average, with occasional motion blur/ghosting the only major gripe; it looked strong in many shots. Check out William Harrison's review for more on the finished product.

Extras:
This screener had no extras, but the final pressing apparently includes bloopers, a featurette ("The Guts of Fright Flick") and behind-the-scenes footage. Again, check out William Harrison's review for more.

Final Thoughts:
A loving, low-budget homage to two of the slasher film's greatest eras, Fright Flick proves that "cheap" can be a compliment. Filled with boobs and blood, it tips the machete to some of the genre's greatest efforts as the red herrings unfold behind the scenes of a troubled film shoot. Rough around the edges and a little hit-and-miss with the laughs (most of which come in the hysterical "movie within a movie" scenes), it tightens the screws when it counts for an enjoyable final third. Recommended for genre fans in the mood for something silly (bloody boner, anyone?). 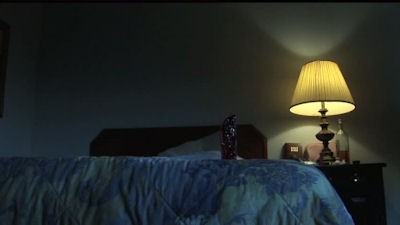