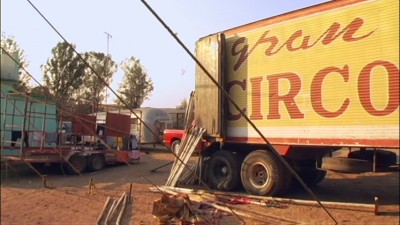 Not since Fellini or Lola Montès has there been a cinematic representation of circus life with such a strong undertow of sweet sadness as Aaron Schock's Circo, the difference being that Schock's film, unlike Fellini's and Ophüls's delightfully artificial constructs, is a documentary that gives us a look inside a family-run travelling circus. The fact that this circus is a third-string provincial affair struggling to survive and preserve a long-running tradition and generations-spanning familial vocation as it travels through some economically troubled rural Mexican states only deepens the film's tribute to the astounding show-must-go-on dedication of the performers and enhances its touching look at the disconnect between the frivolity on the audience's side of a circus and the sometimes desperately tough work it takes to present it. 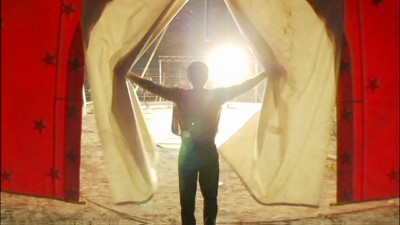 The family at the center of Circo is the Ponces, who put on "Circo Mexico": ringmaster and manager Tino; his wife, Ivonne; their four children; Tino's parents, who own and profit from the show; and, occasionally, Tino's siblings, who sometimes stray from the circus when lured by love, marriage, or the stability of a home that is not on wheels, though they all seem incapable of surviving away from the circus for long without returning for at least a guest appearance. "Family circus" is a term that has been ruined forever by one Bil Keane, but that is what Circo is really about; its low proportion of performance footage is just the icing on a cake of familial drama, conflict, and tension that goes much deeper than one would expect from a circus documentary. Tino has big-city ambitions for Circo Mexico that seem disproportionate to the actual prospects of their professionally executed but small-potatoes outfit, so there is a persistent sense of disappointment. Ivonne and Tino argue constantly, and it becomes clear over the course of the film that their relationship, consisting of little else, is in jeopardy. In addition, Ivonne feels that the backbreaking, constant work that she and the children (all of whom are both performers and grunt-working stagehands) are required to put into the circus is not compensated fairly by her parents-in-law (who, it must be said, come off here as grandparently mafioso, always counting up the money, keeping the family in line, and deriding those from outside the family who, like Ivonne, dare to question their 100-year-old business and way of life). 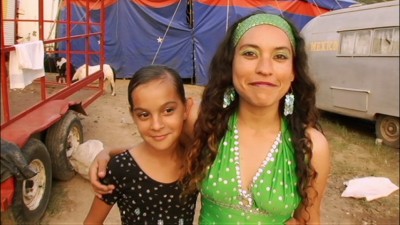 The family strife it causes and the apparently permanent state of financial insecurity endemic to it may make the Ponce's circus-centric life sound like strictly a losing proposition, but we are also made to see that the joy of rehearsal and performance, entertaining and receiving attention and applause, make it worthwhile for them, especially those hardworking but apparently quite happy kids, and even sometimes for Ivonne. Schock is able to capture all the resentments and doubts in the family as only one stratum of a life that includes a never-ending routine that is by turns boring, difficult, frustrating, free, and (in its not-insignificant way) glamorous. For this family, having a trained monkey hanging nonchalantly onto your back as you haul water and set up tents during the day in preparation for a dressed-up, feat-performing, spotlight-grabbing show that night is just par for the course, and Schock conveys a rounded sense of the multifarious aspects of the Ponces' existence. (This is especially noteworthy because the filmmaker apparently traveled alone with the Ponces' caravan, operating his digital video camera and shooting entirely on his own, without a crew; the wide array of swift-moving views is thus particularly impressive.) Schock edits the extensive footage from his travels with the Ponces into a linear narrative that coheres quite well, but another of Circo's surprises is his ability to place the Ponces in the context of their financially impoverished social environment--rural Mexico--as he shoots their surroundings and then, in the editing room, integrates those glimpses of dusty roads, brightly colored walls, and begging, scamming children in a way that broadens the frame of the family's story without ever veering too far off topic. 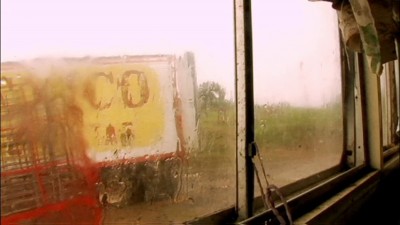 For such a relatively brief feature (it runs only 75 minutes), Circo has all the appeal, in its characters and their specialized milieu, of a richly detailed, multi-generational novel, and Schock skillfully organizes and plays out the Ponces' story in a manner that makes us care about Tino in much the same way we would about Jean Valjean and become emotionally invested in Ivonne like we would for Hester Prynne. Schock makes Circo into something that is much too affecting and involving on the human level to be adequately described as "a documentary about a Mexican circus." It is, instead, a gratifyingly complete depiction of unusual lives as they look and feel from the inside.


Circo was shot on fairly up-to-date digital video technology, lending its image a clarity and "reality," that Schock also clearly knows how to take advantage of for its particular properties of capturing light and color, all transferred nicely (as DV is predisposed to doing) onto this well-produced disc in anamorphic widescreen at an aspect ratio of 1.78:1.


The disc offers Dolby Digital 2.0 and 5.1 options; as usual, I would strongly recommend the latter if at all possible, especially since this is a film whose sound design has been created to surround the viewer in a way that adds to its overall effect. (There are worse things to be surrounded by, too, than Calexico's well-fitting, alternately lush and melancholically spare score.) The audio quality is wonderful, well-balanced, with no distortions that I could hear.


--"The Ponces Now," a postscript updating us on how the struggling family, whom we left in a fairly troubled state, are doing now, including their appearance at a screening of the film for the Morelia International Film Festival.

--"The Making of Circo," a brief interview with director/cameraman Aaron Schock on the roundabout, very fortuitous way the story of the Ponces, perfect for the themes he set out to explore before he even had a subject, literally came to him while he was working on another project in rural Mexico.

--"Calexico on the Making of the Circo Score" is an extended interview with the two primary members of the band, Joey Burns and John Convertino, discussing how their being fans of the film inspired them to create the score, as well as the aesthetic logic behind certain choices of instrumentation and their overall scoring process, ending with a glimpse of a live Calexico performance at a screening of the film in Arizona.

--A gallery of trailers for other documentary features available on DVD from First Run Features.


Aaron Schock's Circo is a one-man show--he made it virtually by himself, with no crew--but it is an unexpectedly expansive work with a surprisingly interested, curious, wide-ranging perspective. He gives us enough glimpses of the exterior of circus life that we know what the Ponces are living for, but how they live--how they negotiate their material and emotional needs against their unusual, and unusually demanding, backdrop--is his primary concern. More than just a look behind the scenes at the inner workings of a circus, then, Circo is a family saga that casts its compassionate eye on a group of interdependent, squabbling, anxious, but tightly-knit and caring people who somehow manage to make the sacrifices necessary to realize, time after time, several hours' worth of goofy, amusing, lighthearted escape for the audiences that gather under the circus tents to enjoy and admire the fruits of their labor. Highly Recommended.