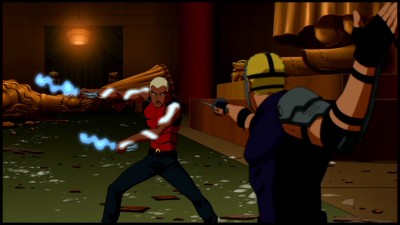 The third volume of the Young Justice - Season One DVD series brings us four more episodes of the Junior Justice League cartoon show, offering more of the superhero shenanigans and top-notch animation that has made the television show good fun thus far.

The basic set-up gets no overhaul here: Kid Flash, Aqualad, Superboy, Miss Martian, Artemis, and Robin are heroes in training, and when not sidekicking for their adult counterparts, they work as a team to stop international crime on their own.

Season One, Volume Three's selected episodes are as follows:

* "Bereft": An excellent start to the disc. The teen heroes wake up in a desert with no memories of anything that happened prior to six months ago--particularly troubling for Superboy, who didn't exist six months ago. The kids have to figure out who they are and why they are there while contending with the local army and a super villain who is pulling the strings. It's a strong script, and the adventure is exciting.
* "Targets": Red Arrow returns, and so does the assassin Cheshire, whom viewers will recall has secret ties to Artemis. Cheshire attacks an international peace meeting that has Lex Luthor in attendance. With the help of Aqualad, Red Arrow discovers the League of Shadows are behind the disruption, and though they stop the immediate threat, there appears to be a larger conspiracy underway, including a potential mole in the hero camp. Meanwhile, Superboy and Miss Martian try to assimilate at a regular high school.
* "Terrors": Superboy and Miss Martian go undercover as the Terror Twins to infiltrate a supermax prison where Batman is convinced ice-powered bad guys are hatching a scheme: a violent prison riot. The developing relationship between the two takes on new dimension thanks to the shared danger.
* "Home Front": The Young Justice headquarters are attacked, and Robin and Artemis must dodge booby traps and Red Tornado robots to save their teammates. Cameo by Barbara Gordon, who is sometimes also known as Batgirl. (Future team member?) 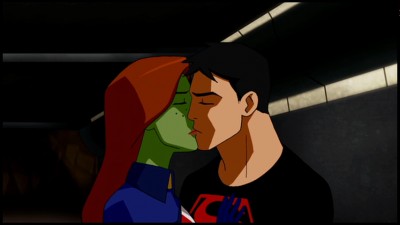 Young Justice - Season One, Volume Three has a particularly action-packed quartet of episodes. They are fast-paced, with solid plots and tension-filled fight sequences. The animation and character design is of consistent high quality, with smooth movement and fully realized environments. In terms of pure adventure-based storytelling, all the shows here are winners.

One thing worth noting is that there is a larger underlying plot being layered through the series. Many of the villains the Young Justice team faces are under orders from a bigger criminal organization. We are now about halfway through the season, so I expect this will pay off soon. Though most of the shows stand on their own, this side story adds a continuity that makes investing in the whole thing worth it. It gives the production team license to have the characters grow and change, something usually absent in superhero cartoon shows when I was a kid.

Of course, that also means that this edition ends on a cliffhanger, which can make for a frustrating wait until Season One, Volume Four.... 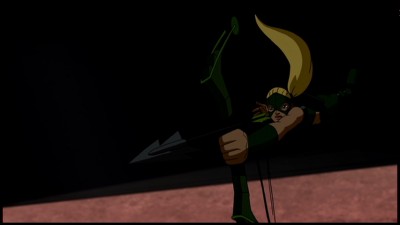 Video/Sound:
Young Justice - Season One, Volume Three preserves the original broadcast aspect ratio and presents the cartoons in widescreen. Colors and resolution are excellent. The Dolby Surround mix enhances the viewing, giving good volume and some minimal interspeaker movement in action scenes when added sound effects improves the acrobatics. This is a well-done disc for this kind of thing.

Extras:
Unlike the bare-bones previous volumes, Season One, Volume Three has...well, one extra, if you don't count commercials. It's a Young Justice "digital comic": essentially, an issue of a DC Comic for you to read on the TV screen. I found it kind of difficult to navigate. It moved between panels too slowly on its own and kept going back to the menu when I tried to get through it on my own.

FINAL THOUGHTS:
Young Justice - Season One, Volume Three is definitely Recommended. Another strong selection of episodes, getting us past the midway point of the first season. Young Justice is easily one of the better animated shows on television. The characters are great, giving kids new heroes to look up to while pushing the nostalgia button for older viewers who grew up reading Teen Titans and watching Superfriends. 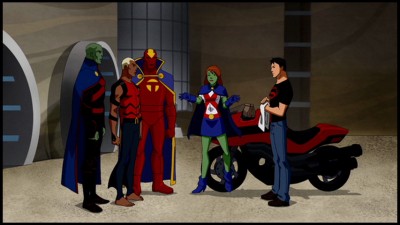