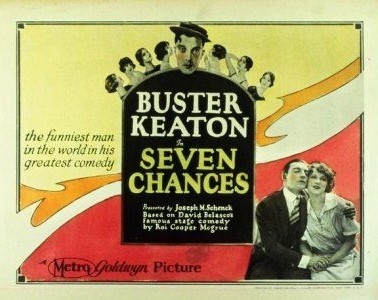 Buster Keaton's comparatively minor but still downright lovely 1925 gem Seven Chances reinforces once again the astuteness of that old Andrew Sarris chestnut (which I never tire of finding supporting cinematic evidence for): When it comes to filmmaking, it's never the "what" (the story, the plot) but the "how" (the execution, the storytelling). In this case, that means that with a different tone and with another personality and delivery, Seven Chances' recounting of the prolonged hardships, humiliation, and physical danger endured by a romantically down-on-his-luck young man as he goes through one hellish trial after another to reach the one he loves would be a particularly desolate and harrowing blues number. But in Keaton's serene and brilliant hands, the extended suffering is slapstick, the character's ordeal an invitation to come up with the most ingenious cinematic techniques, elaborate gags, and convoluted situations with which to draw out his (ultimately worthwhile) discomfort while eliciting our riveted interest and delighted laughter.

Keaton is Jimmie, a finance-industry go-getter with a couple of big problems. The first is that he is in love with a fetching and friendly young woman of his acquaintance, Mary (Ruth Dwyer), but he can't get up the courage to tell her; the film opens on a sequence (in very early Technicolor, no less!) in which montage and intertitles are cleverly and beautifully used to make the seasons pass as Jimmie malingers by Mary's front gate regularly for over a year, gamely chatting her up but always faltering when it comes to the heart of the matter, which is matters of the heart. Jimmie's second major source of stress is fiduciary; his and his business partner's (T. Roy Barnes) firm is on shaky financial and legal ground and will go broke if it doesn't receive a quick, large infusion of cash. Enter a lawyer (Snitz Edwards), whom Jimmie tries to evade because he fears legal reprisals for the company's unreliability, but who actually bears just-in-time good news of an inheritance from Jimmie's newly deceased uncle. After a droll, extended chase deriving from Jimmie's mistaken impression of the reason for the lawyer's visit, he finally gets tracked down and clued in. The departed has left Jimmie an amount--$7 million--that will save his business and set him up for life, but a condition is attached: Jimmie must have taken a wife by 7:00 pm on his 27th birthday, and since that just happens to be the very day on which most of the film's events take place, the race to get Jimmie married is on, and it's hectic from the get-go. 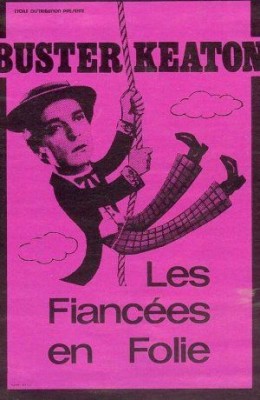 Jimmie's first thought is, of course, Mary. But--in a popping-the-question scene played modestly and sweetly by Keaton and Wilby--after initially delighting her with his proposal, he then alienates her by clumsily and confusingly attempting (and failing) to convey the whole situation, making his proposal seem less like an avowal of eternal love than a mercenary $7 million question. Jimmie (now declined and banished by Mary), his partner, and their new pal, the lawyer, frantically concoct schemes to get Jimmie married in time, including pushing him to work his way down a proposal list of seven girls at the country club (thus the "seven chances" of the film's title) and crossing off names as he goes, and planting a story in the afternoon newspaper about Jimmie's plight, advertising the time (very shortly) and place (a nearby church) where Jimmie will hold a sort of bride-selecting audition. We would be disappointed if this little rendezvous didn't becomes a disorderly free-for-all once the prospective brides begin showing up in huge, aggressive, rapidly growing numbers, and we're not disappointed; Keaton, asleep on a front pew and thus concealed as the church fills, resembles upon awakening nothing so much as Captain Kirk hopelessly surrounded and doomed by endlessly self-perpetuating tribbles. Meanwhile, Mary has reconsidered her indignation and sent a note to Jimmie forbidding him to marry anyone but her. Jimmie does receive the note in time, but will the overeager crowd of aspiring brides now chasing him through the streets and canyons of Los Angeles (complete with an avalanche of huge boulders for poor Jimmie to contend with) put enough spring in his step to get him to Mary, who has a preacher waiting to perform the ceremony, before that 7:00 deadline? And does it really matter so very much if he gets there too late seeing as how fate has, regardless, at least conspired to resolve the conundrum Jimmie faced at the beginning of the picture, surmounting his hesitance and shyness, and bringing him and his true love together?

Keaton fashions Seven Chances into a swift, incredibly tight (its running time is under one hour) pop of the comedic cork, and he does it with his usual style, the flair of a preternaturally gifted filmmaker; it may be short, but it is packed with big and little touches of confidence and creativity. (One standout example is the insouciant, technically/aesthetically perfect use of a lap dissolve that allows Jimmie to "drive" from the country club to Mary's house and back again without ever turning on the motor.) There is nothing labored or ostentatious to Keaton's assured, inspired way with the camera; he uses it as a tool, not an end in itself, and the fascination for and fun he has with moviemaking is infectious. Although Seven Chances isn't Keaton's biggest or best work, it is all very recognizably his, and as such it easily qualifies as the kind of pure pleasure that cinephiles have long felt absolutely free to anticipate when getting acquainted (or reacquainted) with most any picture that bears his signature.


There are apparently no extant negatives of Seven Chances, so Kino has had to compile this new high-def restoration from the best prints available. Working with those limited resources, the company and its restorers have done a remarkably meticulous and clearly labor-intensive job of cleaning it up and making it look the best it possibly can. The most noticeable visual flaws are in the very early, technologically tentative, and now old and rather decayed Technicolor sequence that opens the film, which sometimes gets so saturated that the screen momentarily turns orange. However, once we're in the main, black and white portion of the film, things appear much smoother, and it is clear from a restoration comparison extra (see below) that huge improvements have been made for this edition, making Seven Chances available in the best shape it may ever be (barring the miraculous discovery of a negative somewhere), and certainly the best it's attained to date.


Composer Robert Israel's appropriately jaunty score is presented in both an uncompressed PCM 2.0 option and in DTS-HD Master Audio 5.1, both with incredible clarity and sonorousness. After trying both, I fond the more focused and mild-mannered sound of the uncompressed PCM to be a better fit, as the big surround and additional layers of bass in the 5.1 seemed out of proportion to the silent film experience. Technically speaking, however, both are perfect for their purpose and offer a high-quality sound option no matter what your own sound preference might be.


As with many of their other titles in an invaluable ongoing series of restored Buster Keaton Blu-ray releases, Kino Classics has included a very nice set of context-granting extras:

--A learned, well-organized (if somewhat read-from-the-page sounding) audio commentary by film historians Ken Gordon and Bruce Lawton uses Keaton's burdensome task of adapting a wordy, stagebound work (the film is based on a 1916 play by Roi Cooper Megrue) as the point around which they center their discussion and analysis of Keaton's structuring, filming, and performing techniques, both in Seven Chances specifically and vis-à-vis his overall body of work and artistic development. Along the way, they also demonstrate that they've gone the extra mile in doing their research, cluing us in on the evolution of Seven Chances' premise through a number of similarly-plotted plays and short stories that preceded it.

--Seven Chances also drew inspiration from and passed its sensibility on to other works of cinema, a couple of which are included here. Both the 10-minute 1904 Edison short How A French Nobleman Got a Wife Through the New York HeraldPersonals Columns and the 15-minute 1947 Three Stooges installment A Brideless Groom (co-written by one of Seven Chances' screenwriters) offers its own iteration of the Keaton film's chase-sequence centerpiece, in which the young male protagonist is pursued over hills, into valleys, and through both countryside and cityscape by a scary crowd of aspiring brides.

--"Silent Echoes: Seven Chances", a 10-minute visual essay by silent film expert John Bengston. Bengtson describes the various L.A. locations that feature in Seven Chances, contrasting scenes from the film with photos of locations as they exist today, and going well beyond the essay's stated purpose to offer some interesting and pertinent additional background information and stories about the conception, construction, and shooting of the scenes under discussion.

--An analysis of the film's Technicolor sequence is a most useful bit of context for what is a rather unexpected three-minute opening sequence done in primitive, novelty-grade Technicolor. Eric Grayson, who participated in the reconstruction of Seven Chances for this release, explains the use of Technicolor in '20s silents as a touch of novel but technologically very cumbersome (and, as we can see from the degraded quality of this sequence, rather shortsighted and not very well developed) added spice. What follows is a restoration comparison dividing the screen into quarters so that we can see how vastly improved this new high-definition restoration is compared to previous Kino releases and the film's source materials, which, as Grayson explains, are only prints in various states of repair rather than an original negative from which a new print could be struck.

--The disc also includes a gallery of 16 stills from the film.


It's not a major Keaton, but Seven Chances bears all the marks of his particular genius for the physical and comedic, whether it's his own presence when he's in front of the camera or the ingenuity of his framing, use of space, and montage when he's behind it. Kino has by now given us quite a batch of great, wondrously restored Buster Keaton films (may that project continue to its completion), and although Seven Chances may not sit quite as prominently as The General or Sherlock, Jr. on your Keaton shelf, it will in every sense fit perfectly right alongside them. Highly Recommended.