Given the source material of Hideyuki Hirayama's "Sword of Desperation," it's a bit puzzling why two years after it's original release it's showing up quietly on DVD. Based off the novel of Shuhei Fujisawa, the writer behind "The Twilight Samurai," "The Hidden Blade," and "Love and Honor," a thematic trilogy of Samurai films brought to the big screen by Yoji Yamada, "Sword of Desperation" is easily more trying than any of those three films, but no less emotionally gratifying. 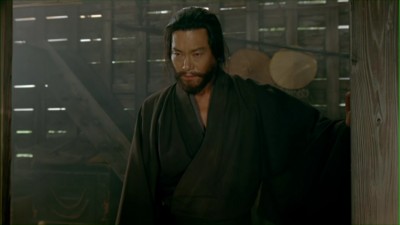 "Sword of Desperation" initially leaves viewers in a haze of mystery, lasting the better part of the film's first half. Set in 19th century Japan, it opens with master swordsman Kanemi Sanzaemon executing Tabu Ukyou 's (the local Lord) consort Renko to death, before quietly surrendering to elder Tsuda. Defying all logic, Kanemi is merely sentenced to a year's house arrest, with only his late wife's niece Rio to care for him. Director Hirayama's biggest mistake and one that nearly soured me on the film, is an unclear timeframe of events taking place. The film abruptly shifts to flashbacks during Kanemi's sentence and in these flashbacks, additional flashbacks take place, some opening and closing in black-and-white to signify the context of the event. A simple, smoother transition to these flashbacks would have made the story slightly less confusing. 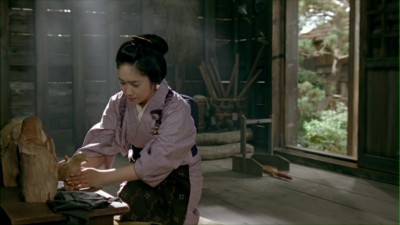 If one is able to stick with the film through this, and by all means they should, "Sword of Desperation" presents a calculated tale of political intrigue punctuated by spurts of philosophy and forbidden romances. Whether or not the film explains why Kanemi was given such a light sentence by the man whose love he killed is irrelevant, as the story fully shows why Kanemi would possibly be driven to what characters in the film describe as "an act of insolence." The heart of the film is Kanemi's inner redemption and re-assimilation into a world he's not sure he can understand, let alone trust anymore. Thankfully, Etsushi Toyokawa, who is tasked with making Kanemi a believable character turns in an incredibly humane performance; even when the scene calls for him to defend the safety of others with his life, Toyokawa handles the situation with a calm confidence, doing some great facial acting that illustrates to viewers he's a man willing to take a life but not pleased to do so. 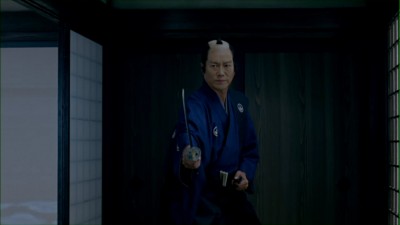 As a complete package "Sword of Desperation" is beautifully filmed, highlighting not only a great ensemble cast but a fine production design that is immersive and familiar. The sheer fact that the story comes together as well as it does, is a testament to Hirayama's confidence in his own abilities, Fujisawa's story and the merits of his cast. The initial confusion is not out of sloppiness, but to covertly put us in the mind frame of the hero and in lesser hands, the outcome could have been a mild failure. Instead "Sword of Desperation" stands tall as both a genre entry and solitary tale of heroism and redemption with lasting appeal.


The 1.85:1 anamorphic widescreen transfer sports strong colors that are key in representing the tonal feel of specific scenes in the film. The image itself is incredibly crisp and sports not a hint of damage or edge enhancement, but detail is noticeably soft. There are strong indications that some DNR work has been done, while it's not incredibly distracting it's still immediately noticeable, especially in close-ups and is the only real issue with an otherwise stunning transfer.


The Dolby Digital Japanese 5.1 audio track, like the film itself is a lesson in quiet understatement. Unwaveringly clear and crisp, it doesn't reveal its full potential until necessary. Directional effects are reproduced skillfully, adding dimension to rooms and the echo of environmental sounds. The low end doesn't see much workout until the final act, but is definitely worth the wait. A Japanese 2.0 track is included as well as white/grey and yellow/green English subtitles.


The sole extras are an image gallery and set of text-based program notes, which provide historical and cultural context for certain references made in the film.

"Sword of Desperation" is a carefully constructed tale that demands viewers trust the cast and crew to get them through a story that does indeed make complete sense. Hideyuki Hirayama's adaptation of Shuhei Fujisawa's work is of no lesser quality than Yoji Yamada's trilogy. The film is by no means a game changer, sticking close to time honored genre conventions, but does so with a master's hand. Highly Recommended.