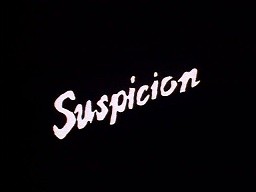 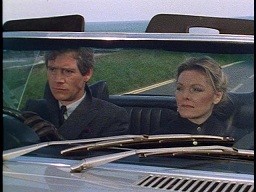 Suspicion, as Horizon Movies' tagline for this newly minted home video release of a 1988 English production suggests, is a remake of a vintage Alfred Hitchcock thriller of the same name starring Cary Grant and Joan Fontaine. While I've seen a number of Hitchcock's thrillers over the years, I have to confess that I didn't see this one, so I can't necessarily comment upon how the remake reflects the original. Matt Hinrichs, a fellow DVD Talk reviewer, has, however, and you can read his thoughts between the two in his review of Suspicion here. I will say that the filmmakers felt the need to jimmy a Hitchcock reference into this production somehow, and so, early on, we see characters passing around a hardcover book about Hitchcock's films.

In any case, curious about what I was watching, I did a quick search on the Internet Movie Database and discovered that, here in America, Suspicion was broadcast on the old PBS series American Playhouse. That comes as no surprise, as Suspicion plays very much like the British imports so common to PBS's schedule during the 1980's: talk-heavy with rich costuming, fine accents, and well-to-do characters. It may seem rather pastoral in approach for modern audiences, but I didn't mind spending 100 minutes to watch this tale slowly unfold. 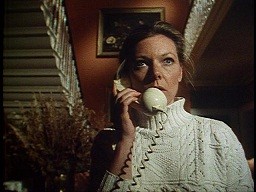 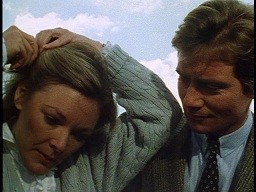 Suspicion tells the tale of Lina (a very badly miscast Jane Curtin - more on that in a bit), a young woman who convention of the times would suggest should have been married off at this point. From what I can gather, she is American, but her mother has married a very wealthy British man and so she has come to England to ride horses, wear nice clothes, and do whatever else it is wealthy people do with their luxury. Lina promptly becomes smitten with playboy Johnnie Aysgarth (Anthony Andrews), and after a whirlwind romance, she marries him.

After their honeymoon, Lina begins to realize what she's gotten herself into. Johnnie is broke and has gambling debts. He's secretive and manipulative. And, he seems to be involved in several "get rich quick" schemes that may (or may not) involve embezzlement, fraud, and murder. Lina becomes paranoid about her husband, and it doesn't really help matters that one of her lone friends is a successful mystery author who is all too happy to discuss clever ways of murdering people.

Suspicion has a slow, deliberate pace that might bore contemporary audiences used to flashy, cut-heavy television fare from both America and England today. However, after an admittedly slow start, the movie did grow on me. Perhaps it was just nostalgia for the programming I remember on PBS during its time period, but I liked the footage of pristine English countrysides and manors. The costuming is suitably dapper as well. Anthony Andrews' performance as Johnnie is suitably cool yet smug; it becomes clear how his character can charm others in service to his own ends.

However, Suspicion has two major flaws that nearly ruin the film. The first is Jane Curtin. The former Saturday Night Live castmember just shouldn't have taken this role. It doesn't suit her. She's too strong a persona for the role of the mousy, spinster Lina, and I never bought into her as the lead character. Second, the ending didn't ring true. I don't know if Hitchcock's original had a similar conclusion, but the last five minutes with the final reveals here seemed hollow and false to its preceding narrative. I won't spoil anything, but I left the movie rather unhappy given its buildup.

So, I'd suggest checking out Suspicion despite its flaws. The best I can say is that, warts and all, the production left me wanting to see the original version. Horizon Movies offers up a skeletal DVD with only the movie and chapter stops, so I'll go with a Rent It recommendation. 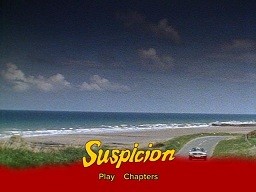 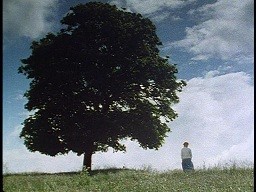 Horizon Movies gives Suspicion a full screen presentation in a 1.33:1 aspect ratio that clearly represents its original television(?) broadcast exhibition. The image seemed decidedly grain-heavy, though this added to its nostalgic appeal.

The lone audio track is a mono English language affair that clearly represents the film's original exhibition. Hey, the dialogue was always clear - what more could you want from a production like this? No optional subtitles are available.

The only two options in the menu system are Play and Chapters, making this disc about as bare bones as a commercial product can be.

Jane Curtin is miscast as the lead in this 1988 British remake of Hitchcock's Suspicion; however, I still enjoyed this deliberately paced thriller until its unfortunately disappointing conclusion. The DVD is bare bones, though, so just Rent It if you're interested.