Unico in the Island of Magic

Discotek Media // Unrated // May 15, 2012
List Price: $19.95 [Buy now and save at Amazon]
Review by Stuart Galbraith IV | posted June 8, 2012 | E-mail the Author
Unico in the Island of Magic [sic?], the 1983 sequel to The Fantastic Adventures of Unico, is more of the same and little else. Produced by Sanrio, the Hello Kitty people, and adapted from the popular manga by Osamu Tezuka (Astro Boy*, Hinotori), it seems to be targeting small and undemanding children, and for them the movie probably succeeds. Further, both movies appear to have a small cult following in the U.S. so their release, however minor the films may be, is nonetheless welcome. 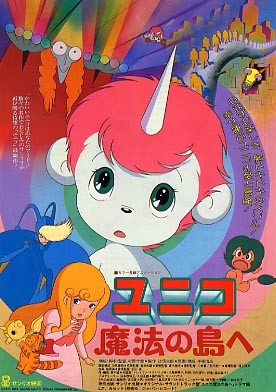 For those coming in late, Unico in the Island of Magic (Yuniko - Maho no shima e, or "Unico - To the Magic Island") makes no attempt to offer anything like Unico's backstory. There are no clips from the first movie, and nothing explaining the character's origins. If you're unfamiliar with the manga or missed the first movie, chances are you'll have no idea what's going on.

Like the original manga but unlike the first movie, the West Wind (now voiced by Hiroko Suzuki, not Chieko Baisho as listed in some English sources, though Suzuki does a good imitation) has zapped Unico's memory of the events in The Fantastic Adventures of Unico and, starting from scratch as it were, the little baby Unicorn (Katsue Miwa again) is deposited in a strange new world.

Here Unico meets a pompous but cowardly cat named Yamaneko-sama (Ichiro Nagai), who wears clunky wooden headphones in which a caged frog and bird generate "music." Unico also becomes friendly with a fair-haired girl named Cheri (Sumi Shimamoto) and her family; they live the woods like characters from Heidi.

The plot, such as it is, involves Cheri's long-lost brother, Torby (Juichi Ikeda), who has turned to the dark side to learn the secrets of magic from his master, Lord Kukurukku (Fujio Tokita), a ferret-faced, bug-eyed former puppet who resembles B-Western icon I. Stanford Jolley. With Torby's help he is decimating the countryside, turning everyone into what he calls "living dolls," but which more accurately resemble the gingerbread-like Rock Men from the sci-fi cheapie Missile to the Moon (1958). After Cheri's parents are transformed, she and Unico bravely travel to Lord Kukurukku's castle - composed entirely of living dolls, all snapped together like Legos - hoping to rescue them.

Unico in the Island of Magic has better and more varied and imaginative animation than its predecessor, but its story is only fair at best. The biggest problem with it is that it marginalizes its title character: Unico is just along for the ride in this one. Further, what charms the character had in the first movie, such as an indefatigable cheeriness and ability to make others happy, is largely absent, with even Unico himself acting pretty mopey much of the time.

To my western world eyes I found Unico in the Island of Magic alternately bizarre, imaginative, boring, and predominantly frenetic without a lot of meat on its bones and a general lack of purpose. Younger children may be drawn to its unusualness - it certainly is unlike typical American animation - but it never seems to amount to very much, either.

As with The Fantastic Adventures of Unico, Unico in the Island of Magic is presented in its original theatrical aspect ratio of 1.85:1 with 16:9 enhancement. If anything the transfer is brighter and sharper than its predecessor, with good color and contrast throughout. Both Japanese and English audio are decent 2.0 mono tracks and the disc is region 1 encoded. The IMDb appears to incorrectly credit or omit some of the English cast (I don't think that's Corrine Orr as Torby, for instance, while to my ears it sure sounds like Ron Gans playing Cheri's father).

Included is what apparently was a television pilot film (made in 1979) for a proposed Unico series that never sold. It has a stronger environmental theme than either of the two frothier feature films that followed and co-stars the voice of famous character comedian Ichiro Arishima (King Kong vs. Godzilla) as the grandfather. It runs 25 minutes and is in Japanese only with English subtitles.

As before, young girls and nostalgic anime fans are going to be the core audience for something like this, and while hardly top-tier Japanese animation I'm still glad English-speaking audiences can enjoy it in its original form. For them it's Recommended.