Windjammer: The Voyage of the Christian Radich


Please Note: The stills used here are taken from the DVD copy included in this package, not the Blu-ray under review. 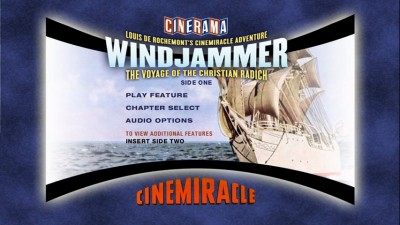 Probably the easiest modern comparison to the Cinerama film process is the IMAX theaters, particularly the true IMAX experience that you find at museums around the country, with the curved ceilings. In fact, Windjammer: The Voyage of the Christian Radich would not be out of place on one of those programs. Just as the nature films shown at the IMAX theatres are meant to showcase the larger film projection using the wonders of the world we live in, so is this 1958 documentary a lengthy way to show off the massive Cinerama screen via a documtary of the seafaring life.

The Cinerama projection was a widescreen process that was, essentially, close to three times the length of an average movie screen. A true Cinerama theatre had a curved screen that was filled by three different 35mm projectors showing individual sections of one long image. The effect, unsurprisingly, was huge and immersive. Yet, also somewhat impractical, and also a tad bit challenging to replicate in other formats. How would you link up the three different panels so that the picture looks complete without divisions? For this Blu-Ray, as well as on the This is Cinerama release, Flicker Alley has developed what they are calling "Smilebox." A regular letterboxed version of the movie would have to be really thin to fit on our standard rectangular widescreen television sets; so, the producers have modified the usual presentation, giving the picture a slight curve to simulate the true Cinerama screen. The shape looks more like a bowtie than a smile to me, but "Bowtiebox" sounds terrible.

Windjammer: The Voyage of the Christian Radich is a documentary following the Norwegian sailing vessel Christian Radich from Oslo around the world to New York City, stopping at multiple points in between (Spain, Trinidad, and more). The film was essentially a special-event picture that toured Cinerama theatres through to the mid-1960s and is the only full film to be shot specifically in the "Cinemiracle" process. It has an overture and an intermission, all of which are included in this restoration. It even had an opening sequence that only used the center panel, which serves as a great introduction. Once the picture opens up, going from the one to the three, you get a real sense of scope. (Interestingly, I just saw Paul Thomas Anderson's The Master in 70mm at the Cinerama in Seattle, and I can tell you, that center screen alone is massive. To add further to the coincidence, "Act Two" of Windjammer opens with the song "I'll Go No More A-Roving," which Philip Seymour Hoffman performs in The Master.) 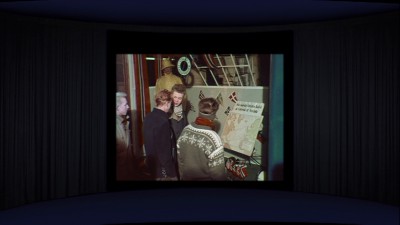 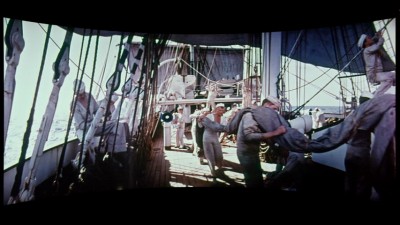 The tone of the film itself is fairy lighthearted. Though I compared Windjammer: The Voyage of the Christian Radich to IMAX movies, the travelogue actually reminds me more of a Wonderful Word of Disney nature film in the way real footage is fashioned into a narrative via creative editing and a friendly voiceover. The Christian Radich was a "school ship," meaning its crew was largely teenage boys getting a working education. The boys learn English along the way, and one even brings a piano along to get some practice. At each port of call, they get to tour the local sites and participate in cultural events. Some of the staging is obvious. In one city, the ship's dog runs away and while the boys search for it on bicycle, the camera crew knows where it is at all times, following it on an afternoon out on the town with a native dog it met in the streets. There are multiple musical numbers, either on land or singalongs at the bottom of the ship. (We find out in the extras, an actual vocal group was brought in for some of these.) 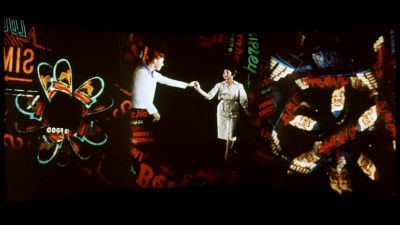 The "story" is not the priority here, though, so the clunkiness is forgivable. One watches Windjammer to see the incredible sites. The photography is often breathtaking. Underwater shots of the boys skindiving, the red skies of dawn, exercises with the U.S. Navy, and the vast open spaces of the world's oceans look incredible in this format. The New York sequences can even boast being a collaboration with iconic photographer Weegee, including a kaleidoscopic use of the three-panel effect, with different images in each screen. Plus, you get to ride on the back of a fire truck! The added length of the frame allows for a real sense of scale. The footage isn't trapped in an unnatural box, but rather has the openness experienced in real life, replicating the true range of vision. The colors are lush and vibrant. Honestly, Windjammer: The Voyage of the Christian Radich is probably not a film you're going to watch very often just for the heck of it, it's more likely going to be the Blu-Ray you pull out to show off how sweet your system is. 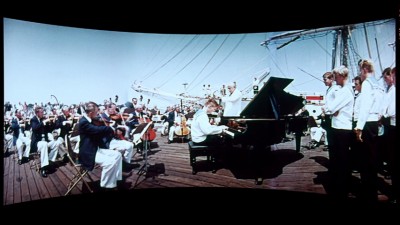 Video:
As suggested above, Flicker Alley's innovative presentation of Windjammer: The Voyage of the Christian Radich is the real selling point of this package. The Blu-Ray image quality is exceptional, with crisp resolution and lively colors. The restoration job is superb. There are still some marks and scratches here and there on the screen, and in some places the break between the different panels is evident, but that is easy to adjust to when looking at so many beautiful pictures.

The release also comes with a bonus DVD version. It's a double-sided disc: movie on one side, bonus features on the other.

Sound:
You can choose between a 5.1 or 2.0 mix of the soundtrack. Both sound good, but the 5.1 is definitely recommended. While most of the audio was dubbed over in post, meaning there aren't many subtle sound effects or natural ambience, the 5.1 is still more lively, filling the room with the music and generally sounding warmer than the more centered stereo mix. 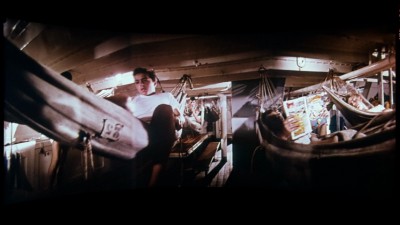 Extras:
The Blu-Ray/DVD bundle comes in a standard-sized case, with a double tray on one side. An accompanying booklet is also included, reprinting the original press book for Windjammer with some additional notes about the restoration process; another program book is on the Blu-Ray as a gallery. Additional press materials and promotional stills are included on the disc as a "Behind the Scenes" slideshow, as well as an additional gallery of original newspaper ads.

A 13-minute featurette titled "Windjammer Gets a 'Facelift'" shows off the unique restoration process, while the hour-long "The Windjammer Voyage: A Cinemiracle Adventure" gives us a detailed history of the production. It examines the origins of the film, and how it was made, beginning with its starting at a Norwegian port and the cultural impact upon release. Surviving sailors from the movie talk about how they got recruited and the experience of going on this particular voyage, including the dangers alongside the obvious joys.

The 14-minute "Windjammer Breakdown Reel" was a film-specific sequence made to be shown on a single projector when the Cinemiracle system would malfunction, thus buying time for getting it running again. In this case, it's some of the adolescent sailors introducing deleted scenes from the movie.

Adding to the historical aspect of the package is a 7-minute look at "The Christian RadichToday," showing the ship in its current state during a 2010 festival.

Finally, there is a re-creation of the original theatrical trailer.

FINAL THOUGHTS:
Recommended. Though an entertaining period documentary, Windjammer: The Voyage of the Christian Radich is really a visual showcase for the giant "Cinemiracle" projection process. Encompassing, essentially, three different screens, this gorgeously photographed chronicle of a Norwegian ship's trip around the world is a marvel of cinematic expansiveness. Full of beautiful scenery and lots of local color from the various places where the boat docked, it's a wonderful travelogue, complete with music and some manufactured storylines. Flicker Alley's Blu-Ray/DVD combo is an exceptional package, providing historical context for the movie and finding a way to show the film so as to emulate its original theatrical look. It's not a great movie, but Windjammer: The Voyage of the Christian Radich is a fabulous home video release, well worth checking out. 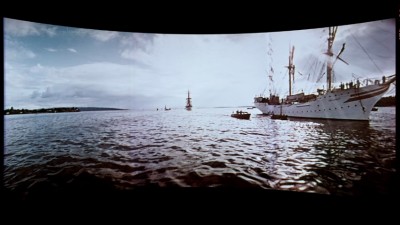