Story of Luke, The 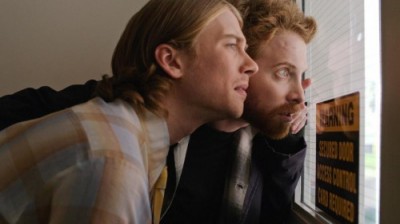 Alonso Mayo's The Story of Luke deals with the elephant in the room about a third of the way in, and just in time. Its title character is autistic--modestly well adjusted, but not the kind of high-skill type we think of thanks to a certain 1988 Oscar winner. While trying to get a job, Luke is asked, "Can you multiply big numbers, or memorize entire books?" He can't. But he does tend to remember the exact and often indelicate wording of things people tell him in semi-confidence, and repeat those things at inopportune moments for the tellers. Luke's social skills may be underdeveloped, but the kid's got crackerjack comic timing. That, in a nutshell, is the trouble with The Story of Luke, which is a likable and well-acted movie that feels just a little too clean and easy.

We meet 25-year-old Luke (Lou Taylor Pucci) on his way to the funeral of his grandmother, whose stern-faced portrait atop her coffin is mighty telling. But she and Luke's grandfather (Kenneth Welsh) raised him loyally when his frightened mother abandoned him, and now he's at an impasse. Luke and granddad go to live with Uncle Paul (Cary Elwes) and Aunt Cindy (Kristen Bauer) and their two kids, and it's a bit of a tinderbox there; Paul is distant and vaguely unhappy, while Cindy is a wine-swilling bitch. (This is not a judgment on my part. "Does everyone think I'm a total bitch?" she asks at one point, before shrugging "I think I'm a bitch too.") Luke's granddad is immediately shuttled off to a nursing home, and he gives his grandson some advice: "You're own your own, kid." He advises him to get a job, find a nice girl, and be a man. Luke listens very carefully. He always does.

The film's primary concern is the accomplishment of those simple goals, which are anything but simple for Luke. Pucci plays him tightly wound, with a small voice, but he doesn't condescend to the character; he gives him dignity and strength, even when the script undercuts those qualities with telegraphed punch lines. I'm not entirely sure why it kept rubbing me the wrong way--it just feels like this should be a messier movie than it is, that it's all a little too smooth and easy, the horny grandpa jokes and set-up/pay-off dialogue structure having a bit too much of a TV sitcom ring.

The supporting cast is good, though--Elwes, though sporting a not altogether convincing Northeastern (I think?) accent, has some nice moments, and Bauer's would-be caricature is surprisingly well-drawn and nuanced. Pucci's best match, though, is Seth Green, in a nicely gregarious turn as Luke's work supervisor Zack, who at first seems deeply anti-social, but turns out to have more in common with Luke than he indicates (his condition is never stated, but Asperger's seems a pretty safe bet). When Zach finds out that the object of Luke's affection is "normal," his reaction is swift and pointed: "You know you'll never really be normal, right?" The two characters have an interesting dynamic, wildly different ideas about the notion of "fitting in," and their scenes have the sharp pleasure of showing us something we've never seen.

But too much of The Story of Luke is too familiar, and too pat. Make no mistake--its heart is in the right place, and that goes double for the performers. It's an appealing movie, enjoyable even. But it too often has the feeling of a too-worked-out, too-well-oiled comedy/drama machine.