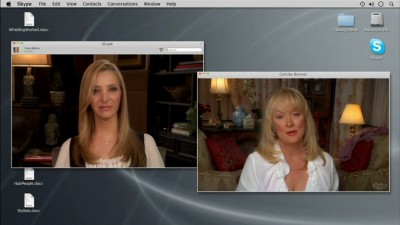 The more humble and reasonable among us don't like to dwell too often on it, but isn't it true that some part of any human being, no matter how generous, ethical, kind, or conscience-driven that individual may be, is a preening, self-regarding egotist convinced it's more important than anyone else and looking out exclusively for number 1? Fortunately for fans of TV comedy, Fiona Wallice (Lisa Kudrow), the ostensible therapist from whose "innovative modality" of three-minute Skype psychotherapy sessions the Showtime series Web Therapy derives its name, is anything but humble or reasonable. She belongs to an impressive lineage of TV personages -- self-involved, self-deluded examples of bad, selfish behavior -- that also encompasses the Arrested Development gang, Homer Simpson, Larry David and Sarah Silverman playing their TV "selves," and Amy Sedaris's Jerri Blank on Strangers with Candy. Hidden not very well, behind Wallice's over-enunciating, wannabe-patrician façade, is a ravenous monster who can never be sufficiently flattered, have a high enough upper hand in any given situation, or move in glamorous, wealthy, or powerful enough circles. The rich comedy, exploited almost as well in Web Therapy's second season as it was in its first, comes, of course, from an incessant exposure of the obvious chasm that separates Wallice's delusions of grandeur from her chaotic, sometimes desperate reality, and her astoundingly resilient obliviousness to it that discrepancy. 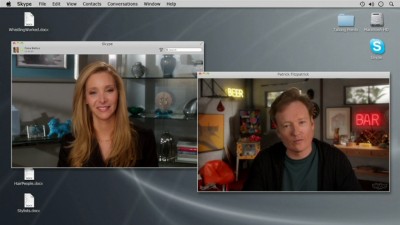 Back for another go-round on Wallice's Wild Ride is her put-upon secretary/sidekick, Jerome (series co-creator/producer/writer Dan Bucatinsky); her mother, Putsy Hodge (Lily Tomlin); her closeted gay husband, Kip (Victor Garber); her affably dumb, sluttish ex-colleague (at an accounting firm from which Fiona's firing was a plot point of season 1) Gina Spinks (Jennifer Elise Cox); and her new beau, Austen Clarke (Alan Cumming), a Richard Branson-like media mogul who, Fiona hopes, will publish her book and then make her his fabulously wealthy, comfortable, admired, and envied kept mistress. For that to happen, though, Fiona must weather enough more of her sham marriage to see Kip into a Republican seat in the U.S. Senate; an appearance of conventional heterosexual/nuclear family-ness is essential to those voters, and actually, Fiona doesn't really mind the idea of being a congressman's wife (or, as she thinks of it, a "first lady," and Austen Clarke is financing/overseeing Kip's campaign, anyway, so everything seems to be coming up Fiona, and what could possibly go wrong? 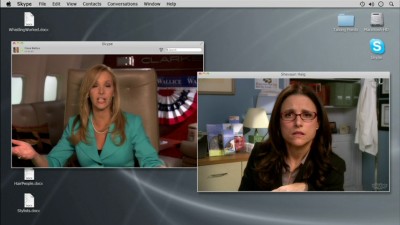 Thankfully, at least from the POV of our funnybones, plenty: Rumors about the truth of the Wallices' situation leads Kip to proactively "play it straight" by putting himself in the hands of a daffy, lusty gay-conversion therapist played by Meryl Streep, and make Fiona prey to a vulture-like Internet gossip culture exemplified by an unhinged blogger (Molly Shannon). Meanwhile, Fiona finds her "practice" beset by an inconvenient lack of actual accreditation leading to her reluctantly asking her rivalrous sibling (Julia Louis-Dreyfus), an actual therapist, for help, while their ever more certifiable mother (Lily Tomlin) gets herself locked up in the crazy house and plots to run her own web therapy business that will undercut Fiona's. The book "ghostwritten" by Jerome (who's having his own trials with a trashy, dubious surrogate mother (Selma Blair) he and his wife have hired, who becomes an insinuating, unwelcome presence in Fiona's house) is a problem, too: Austen Clarke's "right-hand man"/top editor at his publishing empire (Rosie O'Donnell) is brutally honest in a way anathema to Fiona, and is all set to put the kibosh on publishing Fiona's autobiographical self-help claptrap. Even once that hurdle is scraped over, Fiona must grapple with a C-grade Hollywood actress (Minnie Driver) -- a former child star of a Little House on the Prairie-like series and now a contestant on a popular reality show -- who mistakes herself for a player and options Fiona's book, reserving for herself the plum central role of Fiona. The initially ecstatic Fiona's Skype exchanges with this dense but cunning starlet, who means to "study" the therapist and says things to her like "If I need to tone down my sexuality to play you, I really need to know that," soon lead her to have her doubts about whether the proposed movie of her life should be taken as a sycophantic compliment or a most unwelcome confrontation with the mirror. 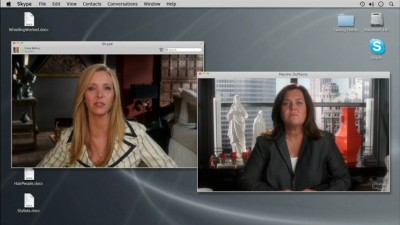 If all that sounds a touch busy, it is; season 2 is decidedly more burdened and fettered by too much plot (the above isn't nearly all of it; there's also a superfluous subplot with a web therapy patient who's an official proxy for Prince William and Kate Middleton, leading Fiona to mistakenly assume she's getting inside dirt from Buckingham Palace -- yawn) than the comparatively simple and carefree season 1. But, because of the nature of the show and the very clever way it's put together and performed by cast and writers/creators, no plot-heaviness can drag it down. The focus is always first and foremost on the laughs, which haven't slowed down since season 1 (I found Kudrow's annoyed, withering exchanges with Streep, Louis-Dreyfus, Tomlin, and guest-starring-as-himself Conan O'Brien particularly funny, but Kudrow spins improvisatory gold with practically every partner); as in any good sitcom, the situation(s), however overstuffed and crazy, is well overshadowed by the comedy, which in this case is perennially fresh, renewable, and spontaneous. At any given moment, we have the privilege of watching talented comedians rising with relish to the challenge of verbally locating and exploiting the funny in their damaged and/or mercenary characters' combative, passive-aggressive (it's always passive-aggressive with Fiona Wallice) exchanges. Then there's the aesthetics and logistics of the thing: It all plays out as web chats, conducted within the confines of Fiona Wallice's computer desktop, which is both innovative (to contrive the appearance of face-to-face online conversations, Roos (better-known as the feature-film director behind such fine American indie-dramedy fare as Happy Endings) and Bucatinsky have done nothing less than appropriating documentarian Errol Morris's camera-setup invention to make interviewees appear to be facing both each other and the camera directly, and fruitfully turned it to their own comedic ends) and helpfully simplifying: No matter how over-eventful the thickening plot gets, it always has to conform to the narrative boundary of two open chat windows on a computer screen; this works amazingly well as a built-in corrective device that curbs any excess and precludes any feeling of sprawl or bloat (terminal for comedy, at least this kind) in the storytelling. 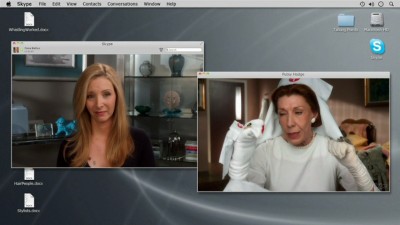 Despite the innovative route it takes, or its very contemporary, technology-dependent premise, Web Therapy has at its core an adherence to old-fashioned TV virtues: It's simply very smart and very funny (but that's not at all simple to pull off, of course), steering so far clear of lowest-common-denominator mediocrity (the typical bane of the half-hour TV comedy) or mawkish, ladled-on drama or "warmth" (a trap into which even a classically beloved, also smart-and-funny show like Kudrow's old haunt Friends was prone to falling) that it makes even above-par current network fare like Modern Family seem a bit sentimental and not-so-sharp by comparison. Nobody ever learns a lesson or gets their just desserts on Web Therapy; not only does it see no point in pretending life is fair like that, it also sees a very worthy goal in at least letting us recognize how ridiculous, literally laughable, all the unfairness and pettiness we inevitably encounter in life really is. It takes for granted (and, to this writer's sensibility, quite rightly so) that we'll laugh, not out of superiority or cruelty towards our perpetually grasping, undermined, and frustrated web therapist, but because we'll recognize that there's a little Fiona Wallice in all of us, and the safest, sanest, funnest thing that can be done with her is to manifest her, bring her out into the spotlight for a while, and enjoy just how sublimely, absurdly, exquisitely funny she is, in spite of her deluded, emotionally myopic, arrogant self. 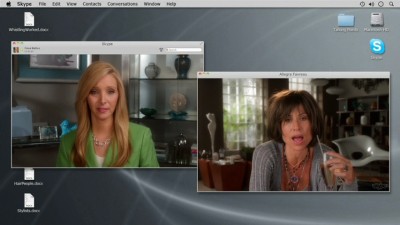 
This transfer of the show (at the standard hi-def TV aspect ratio of 1.78:1, presented anamorphically, over two six-episode discs) is more than adequate to its digital-video-shot "look," which intentionally replicates the crisp flatness of a Skype exchange on a computer monitor, desktop as background. All colors are clear and bright, darks are solid, skin tones appear as natural as appropriate, and no aliasing, edge enhancement, or other compression artifacts were noted.


The disc's Dolby Digital 5.1 sound is more than ample to deliver an unusually dialogue-driven show (though the elevator-music-parody theme, heard in this way, really does make you feel as if you're in some impersonal, pleasant waiting room -- the desired effect); every spoken word sounds crystal clear, immediate, and full, so high marks on audio quality are easily achieved here. 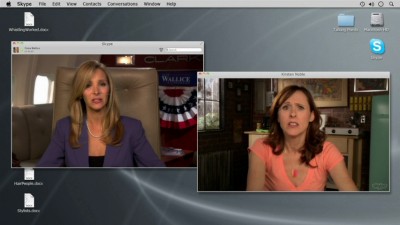 --A 20-minute gag reel that's hilarious but somehow superfluous, since each episode's end credits already feature the choicest flubs and character-breaks from that installment.

--Five deleted scenes, some of which are so funny (Fiona backing over her assistant in her driveway, then blaming him for the inconvenience of having to stop to check on him), you wonder why they were left out.

--The full-length version of the "auto-tune music video" seen excerpted in the show as a cheesy but mortifying viral-video satire of Fiona's closeted-politician husband.

--A preview of season 3 (which begins July 23, with guest stars to include Matt Leblanc, Meg Ryan, Sara Gilbert, and many more). 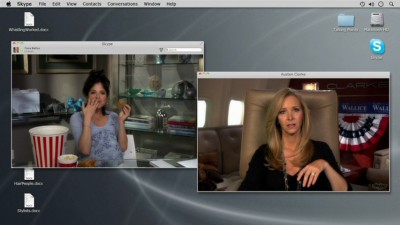 After becoming an Internet hit as a bit of a moonlighting lark for show creators/producers Lisa Kudrow, Don Roos, and Dan Bucatinsky, Web Therapy enters its second season as a full-fledged half-hour cablecast series with all its sparkle intact, only slightly diffused by a bit too much plot this time 'round. But whatever the story's convolutions, that's not what the show's about; rather, its raison d'être is the sheer joy Kudrow takes in the chance to improvise, in the guise of impossibly narcissistic, condescending, self-deluded therapist Fiona Wallice and through quickie "web therapy" sessions and various other exchanges, with a sterling, game gallery of guest stars -- Minnie Driver, Meryl Streep Alan Cumming, Molly Shannon, Rosie O'Donnell, Julia Louis-Dreyfus, Lily Tomlin, Conan O'Brien, and on and on -- who embody the endless string of nemeses, rivals, pawns, and punching bags that pop on and off of the impatient "Dr." Wallice's monitor. Kudrow once again displays her impeccable skill as a verbal comedienne, her unfailing instinct for hilariously demonstrating her characters' highly flawed, very funny personality with just the right words and tone, which in turn gives all her foils on the other side of the webcam something sharp against which to hone their own characters. It's such a simple, light premise and such a loose, improvisatory execution, but it's nearly always on target, focused, fleet, and zippy as a screwball comedy (it's what it looks and sounds like when gifted comedic actors are thinking on their feet). The laughs flow fast and plentiful, here; Web Therapy not only continues to be delightful in its second season, but seems to hold out the promise (with a setup this flexible, fecund, and attractive to talented guests) of much more of equally high, hysterical quality to come. Highly Recommended.