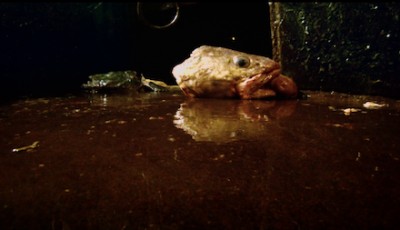 When I first read about Leviathan, I was excited by the description of an experimental, narration-free look at life on a fishing boat. Then, I read my colleague's review on this very site, and I was given pause. Having sat down to watch the documentary now (and only fallen asleep once), I must say that it completely deserves reactions from both ends of the critical spectrum. It is a bold experiment that so completely fractures reality while capturing it that only the most focused and open-minded viewers are probably going to fully appreciate it.

The action is captured by a number of tiny GoPro cameras posted throughout the boat, attached to fishermen, and flying into the air and swooping underwater from the end of a pole. The entire opening 20 minutes seem to be taken from the same POV camera (though it has likely been edited during moments of blackness), while a fisherman runs around the boat and helps guide the newest net full of fish onto the deck -- probably. The seemingly random positioning the camera during these moments obscures all the sailors' faces and makes it hard to see what exactly is happening. It renders all the action as abstract, a very hypnotic abstraction, ve-e-ery hypn...

This is where I passed out and fell asleep. I wasn't bored necessarily, but my brain synapses weren't firing with excitement either. It's hard to concentrate on a movie like this in a home cinema setting, since the pleasures are largely aesthetic and not best processed while lounging. When I awoke, I rewound the film and then watched sitting straight up and fully focused on the screen. 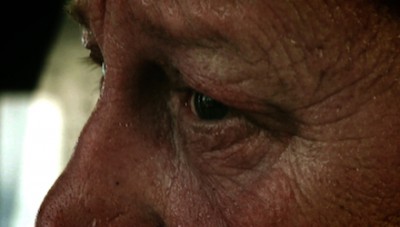 Leviathan is at its most engaging moment-to-moment when it presents one of two images: 1) Sequences of the men working and 2) Nearly surreal images of natural beauty. In the case of the former, often directors Lucien Castaing-Taylor and Verena Paravel will place their cameras so close to the workers as to isolate the movement of what they're doing while not revealing what the actual work is (much like that opening sequence). It is reminiscent of past artistic documentaries about Olympians, such as Visions of Eight. Here, as some men shuck shells, the camera isolates the hands moving back and forth, then creeps up one man's shoulder, then goes around his back to the other arm, where he has a tattoo of a barebreasted mermaid. We don't get any deep understanding of this sailor's personality, apart from the endless labor he must do. These are complimented by surreal trips under the water near the boat, whooshing past discarded fish parts and peeking up out of the water at the constant flocks of seabirds who follow the boat, looking for a little morsel. (The cutest moment of film features a seabird on deck struggling to climb with its webbed feet over a barrier to get inside the pen where the fish are being stored.)

Taken separately, these are both extremely powerful approaches to capturing the world of the boat. Unfortunately, they become more puzzling when juxtaposed against each other. The utterly abstract beauty of an upside-down shot of the seabirds hovering is jaw-dropping, but when we find ourselves grounded by the world of the hard-working men on the boat, an image like this just feels like an over-indulgence. On the other hand, when the filmmakers present gloriously romantic images like a shot of the ship's prow as it bobs and slices through the water, it feels far less worthwhile to spend minutes upon minutes watching nets being retracted by the machinery. One suspects the intent might have been to attempt a holistic view of the sailing experience, but the result is oddly bipolar.

That said, this is a wholly unique, admirably ambitious film. While the filmmakers' ambition may not have coalesced thematically to my liking, I was completely engaged with the images throughout (once I started sitting upright, naturally).

The Video:
Shot, as I said, on HD GoPro Cameras and shot in a style far wilder than mere "guerrilla-style," the footage has many in-born flaws. In the best and worst ways, it often looks like a collection of iPhone videos. Knowing that, this AVC-encoded 1.78:1 presentation is extremely true to its source in reproduction and looks quite excellent in many of the still shots.

The Audio:
The DTS-HD 5.1 is like another character in the film. The immersive surround sound effects are the key to giving the audience the sense that we are there. While the few bits of spoken dialogue are actually pretty unintelligible, this seems like an intended choice by the filmmakers and not an error in the sound mix. 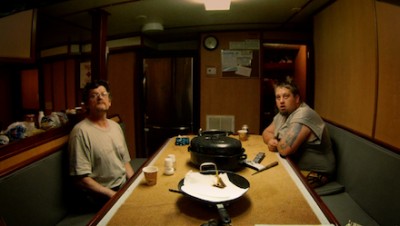 In his review on this site, Tyler Foster said he hated a ten minute scene within the film, of a crew member dozing off while watching TV. I actually really liked that moment. First off, it's only about four minutes. Plus, the scene depicts this man trying to fight off sleep and finally succumbing - there's drama in that. However, the main bonus feature on the disc, a 29-minute HD short film called "Still Life / Nature Morte", which consists of some of the crew getting up in the morning and watching TV, shot in a single take from the same angle as the other scene, is an endurance test. If you just fast-forward through in 5-minute chunks, you'll get the gist.

There are also trailers for Leviathan and other Cinema Guild releases.

Final Thoughts:
If you prefer seafaring movies with stories and characters, you'd be better off watching Billy Budd. If you're an adventurer, looking for novelty out there on the cinematic seven seas, then this comes Recommended.