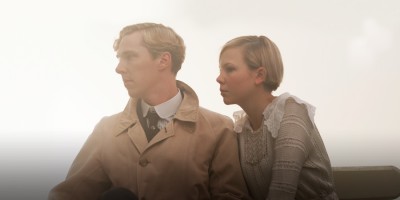 HBO's latest "miniseries event" certainly has an impressive CV. Parade's End is a five-episode, five-hour adaptation of a novel by Ford Madox Ford. The script is by Tom Stoppard (Rosencrantz and Guildenstern are Dead, Shakespeare in Love) and directed by Susanna White (Bleak House), and the cast features Benedict Cumberbatch (BBC's Sherlock), Rebecca Hall (Vicky Cristina Barcelona), and Adelaide Clemens (Generation Um...) in the lead roles while no less than Rupert Everett (My Best Friend's Wedding), Miranda Richardson (The Crying Game), and Rufus Sewell (Dark City) content themselves with minor roles. One could say the deck is stacked too high. Parade's End is a TV series about a stuffed shirt that could use a little less starch itself.

Cumberbatch stars as Christopher Tietjens, a British aristocrat and political player who, in the years leading up to World War I, becomes entangled in a difficult love triangle. A dalliance in a train car with Sylvia (Hall), a fallen woman, leads to marriage after she blames an earlier pregnancy with her married lover (Boardwalk Empire's Jack Huston) on Christopher. Their life together is far from happy, especially as Christopher won't engage his wife in the bedroom. He finds some momentary solace when he encounters a brazen young suffragette, Valentine (Clemens), a woman as principled as he is, even if those principles aren't the same. Despite he and Sylvia being apart at the time, Christopher is devoted to the notion of monogamy and marriage as a sacred bond, so he stops short of doing anything untoward, but love blossoms between him and the girl nonetheless.

Thus, the premiere episode sets off the tangled chain of events that makes up the rest of Parade's End. It's essentially the three main characters dancing around one another. Sylvia ends up really loving Christopher, but his unyielding morals and prudish nature pushes her back into scheming. Valentine stays devoted to him, but can't understand his choices. Meanwhile, as the man grows more disillusioned, he signs up to fight in the War, only to become the victim of a rather detailed gossip campaign. His patriotic service is rewarded with unfounded slurs against his character.

All three characters have a pretty solid story arc. Both Christopher and Valentine have their convictions challenged repeatedly, and reassess as they go. Sylvia makes a valiant attempt to walk the straight and narrow, and even heads to France to try to prove she's a loving wife, braving bombings to get news on her husband (and, of course, nearly dooming him as a result). Given the will-they-or-won't-they setup, I'll leave it to your viewing to find out how well that succeeds--though once you do, it will make you thankful that Cumberbatch spends most of the series being abstinent. The actor's love scenes are awkward. It's like watching a salamander crawl through ice cream.

A cheap jab, I know. I am sure there are certain corners of the internet rallying against me as we speak. Desite being an awkward lover (and, no, I don't think that's all him being "in character"), Cumberbatch is otherwise quite good. He has a knack for playing men who are out of step with those around him and obstinate in the face of dissent. The role of Christopher is all about repression, the kind of part Anthony Hopkins would have made a meal out of in the old Merchant Ivory days, and Cumberbatch funnels what can't be said into his physical demeanor. He looks uncomfortable throughout Parade's End, with the hunched awkwardness and shuffling only increasing after combat damage.

The ladies are excellent, as well. Hall brings pride and conviction to Sylvia, but also a sexy allure that makes her wanton past believable and Christopher's refusals as maddening for the viewer as they are for the wife. (Just do it, man!) Adelaide Clemens is also marvelous, managing a nuanced balance of youthful determination and naïveté. Teenagers often have strong political beliefs, but no experience to back them up. Seeing Clemens onscreen recalls the emergence of Carey Mulligan in An Education. A role like this in a better production could push her into stardom.

Parade's End is a good-looking program. Costumes and set designs are exquisite, and cinematographer Mike Eley (Nanny McPhee Returns, also directed by White) has a clean photographic style that services the story and is adaptable to the given situation. There's a misty British pallor that hangs over everything, a persistent gray that only grows murkier as the narrative progresses, leading up to the dirt and the smoke of the frontline trenches. Parade's End is lovely to look at even as it's also boring to watch. The film is altogether too upright and Stoppard's writing too prim. The aforementioned Merchant Ivory team could have taken a story like this and conveyed the buried emotion in such a way that the heat was still there; Stoppard and White have dropped the passion into such a deep freeze, it literally takes the full five hours to thaw out. 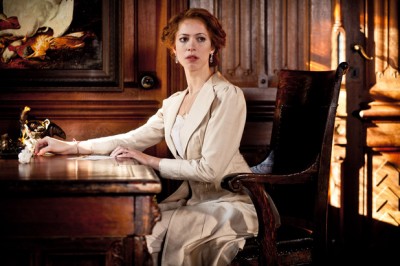 Video:
The widescreen presentation on the Parade's End is excellent, with nicely rendered colors and sharp resolution. There is a pleasing, unforced grain, and a good balance between light and dark. Detail is strong, with lots of depth and an attention to the smallest elements. Really quite fantastic.

Sound:
A variety of audio options are available, with the main one being the English soundtrack mixed in DTS-HD Master Audio 5.1. The work here is flawless, with strong volume and good interplay between the speakers, creating an effective, immersive ambience.

You also have the choice of French in DTS 5.1 and Spanish DTS 2.0, plus subtitles in all three languages (incl. English SDH).

Extras:
The two discs are packaged in one Blu-ray case with an outer slipcover.

The only extra on the discs are a lengthy interview with Tom Stoppard, taken from Elvis Mitchell's NPR series The Treatment.

Digital copies of the series are also included, available via iTunes and the Ultraviolet platform.

FINAL THOUGHTS:
Rent It. Though beautifully shot and valiantly performed by an amazing cast, the five-hour miniseries of Ford Madox Ford's WWI romantic drama Parade's End is a bit of a snooze. Tom Stoppard's stuffy scripting gets the language right, but he doesn't seem to know what to do to make the repressed emotion come through effectively. Fans of period dramas will likely be more forgiving than casual viewers. I still enjoyed watching Parade's End for all the fashion and set dressing. It's also worth it to see Benedict Cumberbatch, Rebecca Hall, and Adelaide Clemens exercise their craft--but only just so. 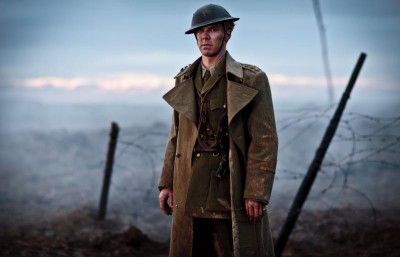