Whip and The Body: Kino Classics Remastered Edition, The 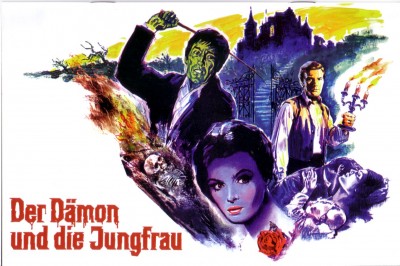 Maria Bava's 1963 ghost story The Whip and the Body is a gothic romance with a kinky twist.

Hammer Horror-man Christopher Lee stars as Kurt Menliff, the outcast son of a wealthy family who returns to his father's Victorian castle upon learning that his little brother (Tony Kendall) has married Kurt's one-time betrothed, Nevenka (Daliah Lavi, Lord Jim, Casino Royale). Kurt is intent on regaining his birthright, as well as reasserting his dominance over his former lover. Nevenka, as Kurt demonstrates, has always had "a little violence in her," and is thus aroused by the snap of his whip.

Things take a spooky turn when Kurt is murdered, killed with a dagger that has past history for the family. The Menliffs are a complicated clan, and when more strange happenings and murders occur once Kurt is buried, there is some question of whether the killer is his ghost (as Nevenka contends) or one of the many other suspects in the castle. Katia (Ida Galli), for instance, has reason to hate Nevenka: she was originally due to marry the younger Menliff before Kurt's banishment threw a spanner in the works.

The Whip and the Body is a solid tale of haunting, though Bava is more concerned with the creep factor in the bodice-ripping love triangle than he is jump scares, gore, or your basic bump-in-the-night material. This makes for a rather satisfying chiller, where the twists and turns are reliant on whose delusion and/or explanation you choose to believe. Unsurprisingly, Lee pulls off the required menace as the vengeful specter, and Lavi is a all kinds of gorgeous as the breathless damsel in distress. Add to the mix Ubaldo Terzano's colorful photography and Carlo Rustichelli's evocative period music, and The Whip and the Body is a tantalizing costume drama about doomed love.

Video:
The widescreen high-def transfer for Kino's new edition of The Whip and the Body is another quality notch in their belt. The company's Mario Bava Collection re-release series has been doing right by the old Italian master, and this is no exception. Outside of one instance of vertical lines on the screen (during a shot of Nevenka at Kurt's funeral), the new image, struck from 35mm elements, is free of blemish. Detail is strong throughout, with a subdued grain and excellently rendered colors.

Sound:
Fans of a Italian cinema should be well aware of the fact that the older films invariably were dubbed over in a studio post-production, and were often shot with international casts featuring each actor speaking his or her native language. Thus, The Whip and the Body has three different vintage audio tracks: Italian, English, and French. Each gets a mono mix presented as a LPCM stereo track. I opted for the English dub, as I figured I would hear Christopher Lee's own voice, but it turns out even he was dubbed!

Even so, the presentation is excellent, with nice tones, no drop-outs, and a good balance between music and dialogue.

Optional English subtitles are available for the alternate language tracks.

Extras:
Bonus features continue the usual pattern for the Mario Bava Collection: a trailer for the featured film as well as other Bava trailers, and an audio commentary by the director's biographer, Tim Lucas.

FINAL THOUGHTS:
An excellent Gothic romance, Mario Bava's kinky ghost story The Whip and the Body offers vintage Victorian horror refracted through the bizarre lens of Italian 1960s cinema. Christopher Lee leads as a sadomasochistic aristocrat come to reclaim what he believes to be his, only to find betrayal reaches from beyond the grave. Highly Recommended.