This Is Martin Bonner 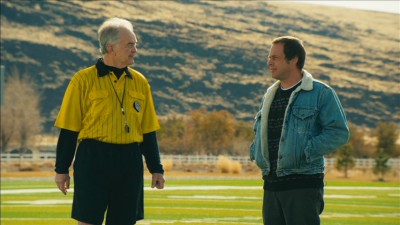 It can seem at times, for anyone who keeps up with the movies, that a certain kind of nominally "independent film," while perfectly worthwhile and enjoyable, has become self-limited, maybe even a bit tiresome, a predictable genre unto itself -- the Little Miss Sunshines and the Way Way Backs and The Perks of Being a Wallflowers, comedies with heart that flirt with the deep end but make sure to stay quirky and pleasant, odd but funny, "dark" but not too dark. Then along comes a film like Chad Hartigan's This is Martin Bonner, a true independent (made, that is, entirely outside of the big-corporate-studio system) that takes the risk of telling us about relatively ordinary (not especially quirky or eccentric) people with relatively ordinary, real but not colorful, troubles in their lives, and immerses us in its characters' experiences, feelings, hopes, and the environments (in this case a vibrantly rendered Reno, Nevada) in which they grapple with it all in a way so vivid, so thoughtful, so convincingly and movingly real, that it makes what's become of the stereotypically plucky little indie film seem like fluff, comparatively low in ambition and high in contrivance and exaggeration. 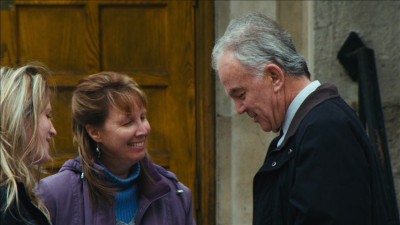 There is nothing too unusual or striking about Martin Bonner (Paul Eenhoorn), an ageing, near-destitute Australian immigrant with loving but variously tenuous ties to his adult children, who's bankrupted himself by leaving a career in the church and moving to Reno to work as a post-prison rehab counselor after experiencing a crisis of faith. Nor does Travis Holloway (Richmond Arquette) emerge into the hands of Martin's organization from a 12-year prison sentence on a drunk-driving/manslaughter conviction with any distinctive tics or eccentricities, just a premature cragginess, a pained humility, and a fragile hope that he can make a new life and somehow reconcile with his daughter, Diana (Sam Buchanan), after his mistake has robbed her of a father for her adolescence. The story is exceedingly simple, the relationships and characterizations of Martin, Travis, Diana, and a few others whose lives intersect theirs shaped through authentically casual (in both writing and delivery) conversations, telephone calls, little moments, glances, expressions that Hartigan has the skill and courage to explore and structure in a patient, painstakingly observant way, such that every insight, every clash, every turn of events and its fallout seems utterly organic, natural, and convincing, with not an ounce of overexerted pressure, forced drama, or apparent contrivance -- not a single shortcut to the elevated state of utterly engaged interest and empathy into which the film calmly, confidently seduces us. 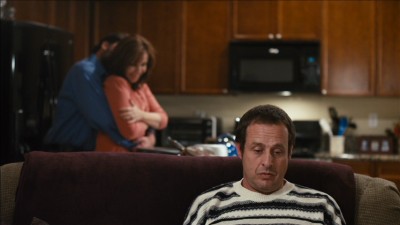 And it's not that Hartigan has chosen the most obvious, handheld/documentary visual approach to signify the naturalism, the immediate everyday reality of Martin's and Travis's hopes and worries, to allow us to instinctively grasp their value and importance. In collaboration with the very skilled cinematographer Sean McElwee, the director creates a highly composed, intent look for the film, with sensitive framings, movements, and cuts that are only done to deepen and expand our sense of Martin's and Travis's situations and milieu. For just the most immediately brilliant, breathtaking example of the lovely cinematic storytelling here, there's a moment where Travis, standing alone in the parking lot of his halfway-house motel/apartment building, looks out to contemplate the world around him, and the camera slowly moves away from him to make a 360-degree move -- encompassing the highway, the city, the sounds (the sound design working in perfect tandem, too), the space of Reno's twilit low-end outskirts -- and lands back on Travis, who's taking it all in. and with that elegant, economical shot, we know, without overemphasis or overexplanation, what Travis's newfound freedom, its hope and its terror, feels like. 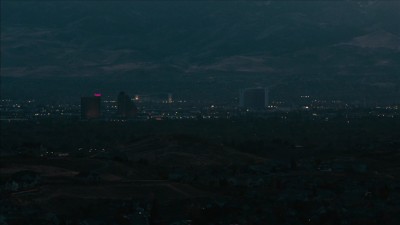 Hartigan completely earns his relatively showier moments, too: When Martin, alone in his apartment, does an impromptu air-guitar rock-out to an eight-track of a tune he recorded in the late Sixties with a rock band for which he was the singer, or when Keegan DeWitt's warped-symphonic, near-grandiose but perfectly calibrated score is used with slo-mo to punctuate isolated moments of grace, it could feel like the kind of superimposed shortcut with which we're all familiar from the aforementioned "indie"-genre films, except that Hartigan brings them in without hesitation but very judiciously and carefully contextualized, so they actually have an effect and a meaning, a continuity with the film and its sensibility as a whole. The bottom line is, Hartigan has an across-the-board sense of scale -- visually, narratively/emotionally, temporally, spatially -- so well-developed and astute (much more so than that of many much more seasoned filmmakers) that he can make even things that perhaps shouldn't work work splendidly well. 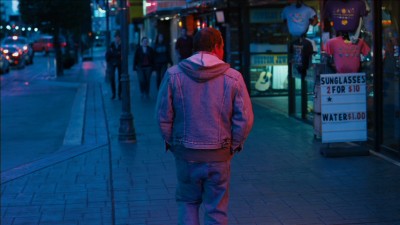 There's nothing in This is Martin Bonner that comes across as earth-shatteringly, life-or-death Eventful, yet the film's seemingly minor events and their impact penetrate deeply into your consciousness, because Hartigan has the conviction and temerity to presume their interest and relevance, and the talent to expose those qualities in his characters and their stories without ever interfering by laying things on too thick or forcing them to be any more (or less) than what they are -- not very obviously or unusually dramatic problems and existential questions the weight and contours of which, as experienced by Martin and Travis, Hartigan perceives down to the last gram and the most subjective, vital detail. The film is essential, deserving of much more attention than it's so far received: It's nothing less than a 90-minute joining of the viewer's life with others that are beautifully demonstrated to be of equal worth and complexity and vitality, and thus has the actual potential to leave you a bigger, better person when the final credits come up than you were when you clicked "play the film." 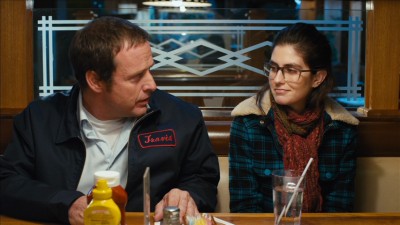 
This transfer, which presents the film at an anamorphic-widescreen aspect ratio of 1.78:1, thankfully does right by Hartigan's vision and DP Sean McElwee's very fine, subtle cinematography. All of the colors, darks, and skin tones are vivid and clean, with all shading and detail of light intact. The transfer retains a nicely cinematic, celluloid-like texture, with no overdone, flattening digital cleanup and with virtually no compression artifacts. There is maybe the slightest hint of edge enhancement/haloing in some of the brighter scenes, but it's mostly a triumph of well-preserved picture quality.


The disc's Dolby Digital 5.1 surround track does an excellent job of keeping intact the film's judicious, subtle, sometimes extraordinary use of the surround sound, creating a sonic space to match the scale and meaning of each scene. (The score, at its richest, is truly immersive here.) Everything is clear, full-bodied, resonant, and in perfect balance, with no muffling or distortion at any time. 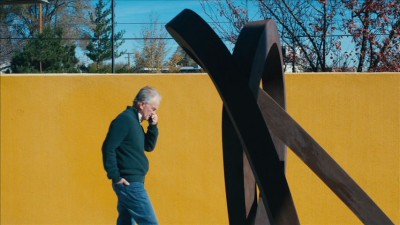 
--Feature audio commentary with writer/director Chad Hartigan and actors Richmond Arquette and Paul Eenhoorn, which survives the literally phoned-in (remotely, but simultaneously, recorded) contribution of Hartigan to achieve an intimate, casual, but informative and revealing reminiscence of the experience of making the film and the various creative and technical processes that converged to form what we see in the final cut.

--Casting tapes of Paul Eenhorn and actress Sam Buchanan (who turns in an extraordinary performance as Travis's daughter), both of whom were selected by Hartigan for their roles based on the auditions preserved here.

--"Composing and decomposing the music of This is Martin Bonner", a brief and down-to-earth but fascinating mini-documentary, featuring Hartigan and composer Keegan DeWitt, about the very particular, painstaking, and uniquely inspired conception and creation of the film's unusual and apt music, operatically imagined then "treated" in an avant-garde manner to achieve the unobtrusive but haunting results we hear in the finished picture.

--A photo gallery, presented in slideshow format, featuring a cornucopia of interesting and beautiful behind-the-scenes pics.

--The film's theatrical trailer, plus other previews for films fro Monterey Video. 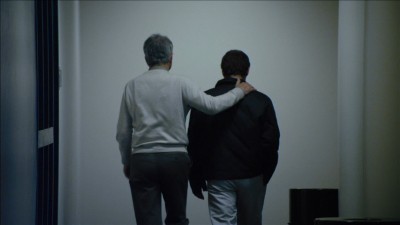 Taking for its raw material some fairly familiar stories and themes (the re-acclimating ex-con; the ageing man making a belated new start), Chad Hartigan's This is Martin Bonner takes such a steady, strong, and intuitively insightful and thoughtful tack in putting its story on the screen, it feels as if we're being immersed in these characters and these life circumstances, their pain and their potential, for the very first time. The thought and feeling that the highly gifted, observant, and conscientious Hartigan, and his cast and crew, bring to their depiction of Martin Bonner (Paul Eenhoorn) -- a near-senior who's moved from a job with the church to post-prison rehab counseling after a crisis of faith -- and his charge/friend, Travis Holloway (Richmond Arquette) -- a man who's just done his time for deadly drunk driving and hopes to create a new life and reconcile with his daughter (Sam Buchanan) -- shines eloquently in every frame, to the point that moment's that shouldn't work somehow do. Hartigan's visual sense is absolutely stunning, but never precipitate, always and only used to deepen and expand the characters' worlds and experiences, and the superb performances by Eenhoorn, Arquette, and Buchanan underscore Hartigan's exceptional aptitude for casting and working with actors. Hartigan demonstrates, without missing a beat, that he has the visual/narrative skill to invest us fully in the familiar troubles of the lives he's letting us into, to render vivid and overwhelming the urgency, hopes, and fears that Martin and Travis must navigate. This is Martin Bonner is Highly Recommended; it's a film made with rare care and accomplishment, and there isn't a single stylistic or narrative false note in it.