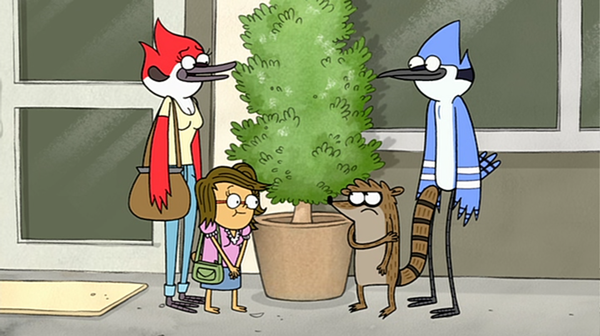 Released in time for Valentine's Day but not really what I would categorize as mushy romantic stuff, the fine folks at Cartoon Network have seen fit to release another themed set of 16 Regular Show episodes. This is the fifth collection of non-season-specific episodes that has been made available (DVD Talk has previously reviewed the second one and the third one). While a quarter of the episodes in this new collection were previously released in the complete first and second seasons set that came out last year, their inclusion here makes sense to allow viewers to track the change in the relationship between this collection's title characters from non-existent to kinda-sorta-existent.

For the uninitiated, here's a brief rundown of the series. In the grand tradition of Ren & Stimpy, Animaniacs, and Freakazoid!, Regular Show seems to defy demographics. When I was exposed to the show, my first puzzled thought was, "What age group is this for?" It's like an Adult Swim show, but sweeter. The twentysomething main characters seem to have been ripped out of a mid-'90s indie movie about slackers, only here one is a bluejay and the other is a raccoon. The jokes can be awfully dark: in the season one episode "Just Set Up The Chairs" (not in this set), a drunken clown and pony headed for a children's party are zapped by a villain and disintegrate into a pile of ashes. The soundtrack is frequently peppered with '80s hits that would have no cultural relevance for most 12-year-olds. But, of course, 12-year-olds like being treated as adults, so inevitably the show works for everybody.

Mordecai (the bluejay, voiced by show creator J.G. Quintel) and Rigby (the raccoon, voiced by William Salyers) work (or more accurately, slack) in a park and live with their co-workers. Their co-workers are a yeti who skips, named Skips (voiced by Luke Skywalker, er, I mean, Mark Hamill), a giant lollipop with an affection for outdated technology named Pops (voiced by Sam Marin), an overweight, Frankenstein-looking dude named Muscle Man (also Marin), a ghost with a hand on his head called Hi-Five Ghost (Quintel, although this character appears very little in this collection), and a grumpy gumball dispenser who is the boss, named Benson (Marin). If these characters seem arbitrary, they pretty much are. Quintel and his writers are good at fleshing out the characters beyond their surface quirks, but there is no good reason for these entities to be working and living together. 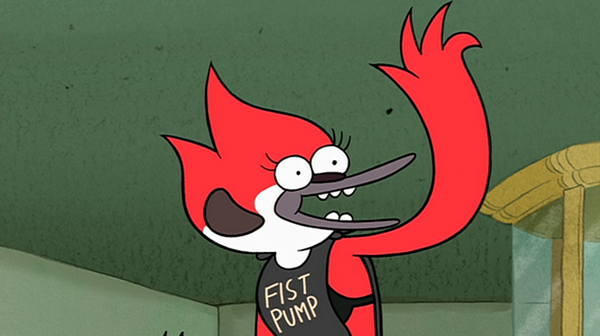 In general, each 11-minute episode will follow a pattern that is extremely satisfying. A challenge will be set to Mordecai and Rigby, they will respond to this challenge in a way that seems fairly sitcom-y (like in a "regular show," get it?), but then in the final quarter, things will go batshit somehow. For example, in the first episode on this disc, "Caffeinated Concert Tickets," Mordecai and Rigby need to get tickets to see the band Fist Pump because Mordecai's crush, a red-breasted robin named Margaret, will be there. That's the challenge. They decide to start doing more and more work, so they can rack up extra money for the tickets, and they drink a bunch of coffee to stay awake. That's the sitcom solution. But then... the tickets turn out to be much more expensive, so a Japanese man and a giant coffee bean, who only says the word "coffee" over and over again with a Japanese accent, offers them a contract to drink coffee from the bean's teats to stay awake further and work more. When it turns out the contract also stipulates that Mordecai and Rigby have to turn over the concert tickets when they're done, the boys renege and the Japanese man and coffee bean chase them with a chainsaw. That's the batshit part.

Inevitably, a show that is dedicated to tweaking storytelling norms is not going to deliver its audience a standard-issue love story. Instead, the Mordecai and Margaret Pack is mostly focused on Mordecai's inability to ask Margaret out or tell her what he feels. While the show would often seem to be a celebration of arrested development and prolonged adolescence, it takes a very clear-eyed approach to the emotional side effects of such an existence. There are a few episodes sprinkled into this set about Muscle Man's relationship with his girlfriend Starla (who horrifyingly looks just like him), similarly focused on his inability to properly express his emotions to the woman he loves. Meanwhile, a nerdy mole named Eileen, who works at the same diner as Margaret, gets a crush on Rigby but he frequently rebuffs her attention despite the fact that she would probably be a good match for him.

It all feels surprisingly grounded and realistic, considering the wild flights of narrative fancy the show can take, yet this focus on inaction can make the Mordecai and Margaret Pack a little frustrating for play-all viewing. Mordecai keeps finding himself in the same self-doubting cycle for about two out of three hours worth of the episodes. While obviously it's good for a show to keep that dramatic will-they-or-won't-they? tension alive for four seasons, the somewhat repetitive nature of that tactic means that this particular disc is probably best for multiple cherry-picked viewings. That said, there's no particularly weak episodes in this batch, and folks who are too impatient to wait for future complete season sets will have plenty to satiate their need for a Regular Show fix. 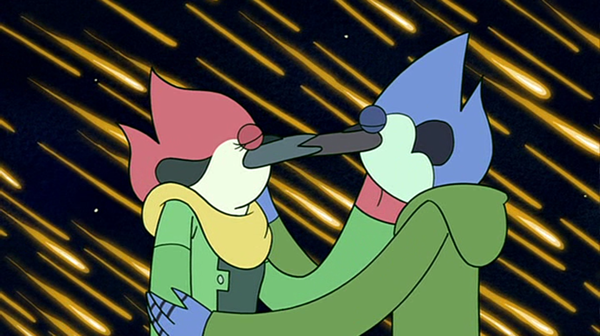 The Video & Audio:
While the show looks and sounds its best in HD, this is an extremely solid standard-def presentation. The 1.77:1 widescreen image seems to have no distracting compression artifacts, and the animation looks crisp and attractive. Similarly the Dolby stereo audio is clean, well-mixed, and suitably raucous during the over-the-top action moments. Those random '80s hits sound good when they pop up too. English SDH are also provided.

Final Thoughts:
Regular Show is absurdly funny yet surprisingly warm. If you're not a fan yet, this is probably not the best place to start. If you are a fan, this is an excellent collection to tide you over until Cartoon Network finally breaks down and releases more complete seasons. Highly Recommended.