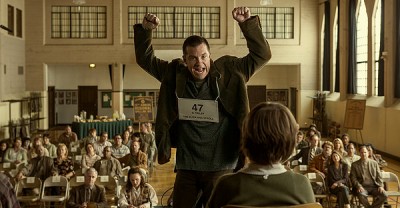 Popular comic underdog Jason Bateman (Arrested Development) steps behind the camera to make his feature-length directorial debut with Bad Words, a comedy that will probably get a lot of notice for its unrelenting mean streak and not for any of the emotion that peeks through from underneath. Which is too bad, because it's a pretty entertaining comedy if you give yourself over to it.

Bateman stars as Guy Trilby, an angry 40-year-old who has decided to exploit a loophole buried in the rules of the Golden Quill National Spelling Bee and compete as an adult. The bylaws only require that a participant not have passed the eighth grade, there is no restriction placed on age. Having never officially been put forward in school, Guy sees it as his right to get in the game. Possessed of a photographic memory and a pissed-off determination, Guy goes all the way to the final round, bringing along a haggard reporter (Kathryn Hahn, The Secret Life of Walter Mitty) assigned to write about his efforts. She is a regular subject of Guy's abuse, and also his regular bedfellow. The award for most awkward sex scenes of the year goes to....

Guy is nothing if not consistent. Everyone who crosses his eye line is subject to his barbs. This includes, most notably, the director of the spelling bee (Allison Janney, The Way Way Back), and one of Guy's young competitors, Chaitainya Chopra (Rohan Chand). The nine-year-old first starts pestering Guy on their flight to the finals, and despite his best efforts to rebuff the lonely child, Guy ends up taking pity. Seeing that the boy has been left on his own by his parents, Guy takes him out for a night on the town, playing pranks, shoplifting, and indulging in food and drink. Guy even pays a hooker so Chaitainya can see his first pair of breasts. It's a fun sequence, lacking in sentimentality. Guy may be doing the boy a favor, but he doesn't have to adjust his regular behavior to go along with the fun. It's something the movie could have played up. For all his bile, Guy is really still just a kid himself.

Bad Words is written by first-time screenwriter Andrew Dodge. The scribe has a friend in Bateman, who really does the writing more favors than it probably deserves. I can't imagine Guy's long-winded zingers--which mostly involve making fun of someone's sexuality or race--would read that funny on paper, because they actually aren't that clever. It's Bateman's delivery that sells them. He appears to be simultaneously exhausted by how long it takes his victims to get the gist of his insults and relishing every single drawn-out syllable. The humor is the harshest of the harsh, and those sensitive to such verbal abuse will likely want to opt out of Bad Words. I'm sort of a prick myself and tend to dig this kind of material, so I chuckled more than just about everyone at my screening.

As a director, Bateman shows a surprising confidence. He doesn't make a first-timer's mistake of overdoing it. There are no grandiose displays of style, no insistence that we notice what he is doing with the camera. Instead, his focus is on the story. The director keeps Bad Words moving, turning in the film at a lean 88 minutes. His experience on sitcoms has served him well (Bateman directed episodes of Valerie as early as 1989, when he was barely 20). When the material is this tight, there is no time to fool around. That said, he does handle various visual elements well, including moving back and forth between the spelling bee as it's happening live on stage and the televised version, hosted by the big boss of the Golden Quill and a TV presenter (an excellent Phillip Baker Hall and Ben Falcone). Credit for this is likely also due to cinematographer Ken Seng (Project X) and editor Tatiana S. Regal (Lars and the Real Girl).

Goldman's script eventually makes a few predictable moves, but it also has some surprises in store. The resolution manages to eek out just enough treacle to lend some satisfaction to the emergent emotional core of the movie without completely jettisoning its caustic spirit. If you stuck it out despite hating what you were watching, there probably won't be enough redemption to make you feel you haven't wasted your time, but if you stayed with it because Bad Words is your particular bitter cup of tea, it'll be just the right amount of "not enough" to justify your having come on board.