"Somebody said, 'What do you want on a desert island for the rest of your life?' No contest. A bar. An open bar. Are you kidding?" 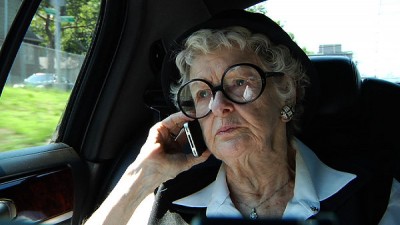 Elaine Stritch is an Emmy and Tony-winning actress who has had a long and varied career on Broadway, in movies, and on television. Current audiences will know her for playing the mother of Alec Baldwin's character on 30 Rock, though her resume dates all the way back to the 1940s. She has had fruitful working relationships with both Noël Coward and Stephen Sondheim, and has also had successful runs with her own one-woman shows.

One such show is part of the narrative in Elaine Stritch: Shoot Me, a new documentary by Chiemi Karasawa. The movie zeroes in on 2010, when the performer was 86, as 30 Rock was in full swing and Stritch was putting together a new act performing a selection of Sondheim tunes at the Carlyle in New York City. Shoot Me follows her on her day to day, rehearsing her songs and working with Alec Baldwin and Tina Fey on the set of the sitcom. It also looks at how she is dealing with old age, including struggles with diabetes and alcoholism, while celebrating all the years and all the hard work that led up to this point.

Stritch is one-of-a-kind personality. She doesn't hold back her opinions, and generally expresses herself in the same gruff manner as her 30 Rock character, exhibiting much of the same wit but without some of the more hateful personality traits. Admirers who show up to tell Karasawa how much they appreciate Stritch include John Turturro, who directed her in Romance and Cigarettes, and the late James Gandolfini, her co-star in that film. All of these folks acknowledge her personality as a major reason Stritch has been successful for so long. Her moxie carries her through, but she is also able to be vulnerable. Some of the best sequences in Shoot Me are when Stritch gets honest about her personal life, including losing her husband, or deals candidly with her efforts to balance her appetites with her health problems. There are also plenty of juicy showbiz anecdotes to keep the proceedings from getting too dark.

Ultimately, Elaine Stritch: Shoot Me is a movie about a grand dame of the boards facing her own mortality. Karasawa has provided the actress a chance to reflect on her legacy, and also to crystallize that history, supplying a starting point for new audiences to discover everything that Stritch has accomplished. The tribute shows that hers was a life well lived. The guts and the humor that took her to the top continue to serve Stritch to this very day, and though no past is without its moments of sadness, Stritch can look back at hers without having any regrets. 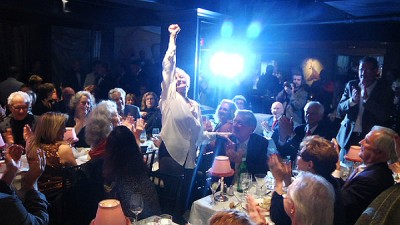