NOTE: The images used to accompany this article are taken from online sources and do not represent the quality of the Blu-ray under review. 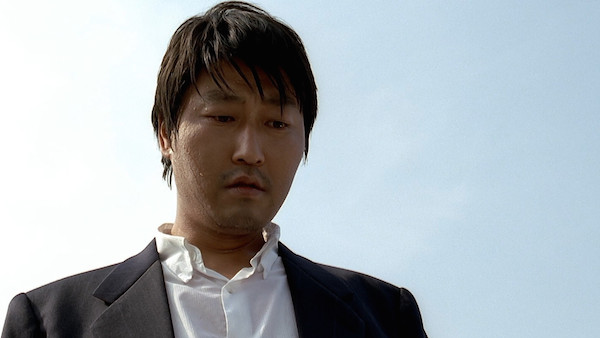 While American genre filmmakers tend not to shy away from depicting violence and brutality, their gory imaginations rarely scale the heights of bodily destruction realized onscreen by their colleagues working in Asia. For instance, the new Arnold Schwarzenegger action movie Sabotage has an oddly horror movie-like fascination with blood and dismembered body parts, but it also only has about one-tenth of the visceral impact created by the often painful-to-watch hammer fight in The Raid 2. Similarly, when folks were losing their minds over the violence in Eli Roth's Hostel back in '05, it felt like a timid approximation of the startling work being put out by Takashi Miike in Japan and Park Chan-Wook in South Korea. Standards are always shifting and filmmakers will continue to push against the boundaries of what audiences will accept, so it should not be completely surprising that the images in Park's 2002 film Sympathy For Mr. Vengeance don't pack exactly the same shocking punch that they had one short decade ago. Fortunately for the film, the power and horror of Park's story is not completely dependent upon the bluntness of its violence.

The road to hell is paved with good intentions, and certainly none of the main characters in Sympathy for Mr. Vengeance are particularly evil, but their choices tragically condemn each and every one of them. Deaf-mute working stiff Ryu (Save the Green Planet's Shin Ha-Kyun) needs a kidney for his dying sister. He would donate his own, but he has the wrong blood type. He tries buying a kidney from some gangsters, but they just steal all his money and one of his kidneys. Miraculously, a donor is found, but now the recently fired Ryu has no money to pay for his sister's surgery. His lefty activist girlfriend Yeong-Mi (Cloud Atlas's Bae Du-na) suggests kidnapping his ex-boss's daughter and ransoming her. Ryu fears he would be the prime suspect in such a kidnapping, so they instead kidnap the daughter of another factory boss, Dong-Jin (Snowpiercer's Song Kang-Ho).

So far, so good. The young girl, Yoosun (Han Bo-Bae) is safe and relatively happy, and her father plans to pay the ransom without involving the cops... but then everything starts to go horribly awry, setting Ryu and Dong-Jin fatally at odds with each other. At this point, a reviewer of this film can choose to blurt out what happens next because we're still fairly early in the plot or he can attempt to preserve some of the film's surprises. I choose the second approach, because Sympathy for Mr. Vengeance's storytelling is unusual and I think there is a distinct satisfaction in watching the plot unfold without prior expectations.

Visually, Sympathy for Mr. Vengeance is strikingly stylized but not grandiose, with relatively little camera movement and most of the images shot with a wide-angle lens. This increases the depth-of-field, meaning the actors and the background are both in focus, giving scenes a slightly surreal aura and subtly commenting on the way the surrounding world impacts the characters. In a similar vein, Park meticulously constructs the dire circumstances for each of the two central characters, making each painful or tragic development feel inevitable. These characters presumably could make smarter choices that would likely side-step the bloody and vicious confrontations that arrive with increasing frequency as the film goes on, but once Ryu and Dong-Jin become obsessed with vengeance, their fates are sealed. Park allows us to simultaneously empathize and feel disgusted by both of these men, which severely complicates any catharsis we might have expected to receive during the film's violent scenes.

Dozens of films have since surpassed Sympathy for Mr. Vengeance in terms of shocking brutality, but few manage to achieve the same unsettling mixture of horror, beauty, and banality that makes so many of the film's images unforgettable. Revisiting the film now, the damaged emotional core of each character remains the most affecting aspect, cutting far deeper than a blade slicing through an achilles tendon.

(Although... that Achilles-slicing scene is still one of the most unsettling things that has ever been committed to film. [Take that, Hostel.])

The Blu-ray
I do not own the Vengeance Trilogy Blu-ray collection, which came out in 2010, but this appears to just be a belated solo release of the Sympathy for Mr. Vengeance disc from that box.

The Video:
Apart from a few brief, isolated instances of artifacting and edge enhancement, this AVC-encoded 1080p 2.35:1 transfer is outstanding. There is an excellent level of fine detail both in the many minimalist long takes and during the bursts of kinetic activity and violence. Though Park and cinematographer Kim Byeong-Il tried to use a lot of "puke green" throughout the film, the overall color palette is not at all monochromatic or sickly. Skin tones are realistic and lifelike throughout.

The Audio:
Although this is not a film dominated by typical action moments, the Korean DTS-HD MA 5.1 audio helps immensely in creating an immersive and unsettling atmosphere. Certain scenes -- like the two autopsies in the film -- rely more on sounds than visuals to provoke a reaction, and that foley work is pristinely reproduced in all of its icky glory. The dialogue comes through cleanly, and the music has the appropriate heft. Overall, it's a considered, well-executed soundtrack. The disc offers optional English subtitles.

- Carried over from the 2005 DVD release, this commentary is in Korean with optional English subtitles. Early on, Ryu Seung-Wan asks his friend, "Is Ryu's hair green because he wants to be a tree in the gray city?" After the two share a chuckle, Park Chan-Wook replies, "There could be many interpretations, but I don't think that is right." This is a great, entertaining and informative commentary.

Final Thoughts:
Though it was marketed 10 years ago based largely on the "extreme" elements of its storytelling, Sympathy for Mr. Vengeance holds up now as more than just a shocking novelty. The artistry of Park Chan-Wook and the three-dimensional performances by the entire cast make the film emotionally affecting and not just startling. Highly Recommended.