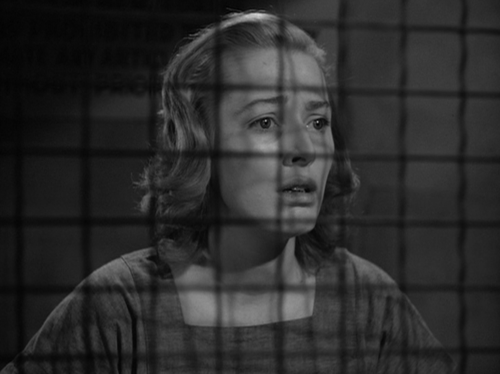 Caged is a 1950 women-in-prison movie that has a lot more in common with Cool Hand Luke than a Roger Corman quickie, like The Big Doll House. Nominated for three Academy Awards -- two for its actors and one for its script -- the film is a flawlessly constructed piece of agitprop that succeeds by putting its characters first, thereby allowing its message to develop naturally from the dramatically interesting hardships these characters face.

At the start of the film, teenager Marie Allen (Eleanor Parker) finds herself in for a stretch of one-to-fifteen years, just for being unlucky enough to be in the car while her husband unsuccessfully tried to hold up a gas station. He got killed in the ensuing tussle, and Marie got jail time for running to his aid. Parker initially plays Marie as the quintessential "new fish": wide-eyed, inexperienced, and afraid. Marie tries to be a good girl -- after all, she wants to be paroled at the first available opportunity -- but Caged shows how prison inevitably causes an essentially decent person to evolve into something quite different to better suit her surroundings.

Even though Marie is thrown in with murderers and thieves, like butch queen bee Kitty Stark (Betty Garde), the film is far more sympathetic to those women than to the system which makes them recidivist prisoners. Marie is warned that even if she gets paroled, she could be facing months and months of "dead time" while her parole officer finds her a job. Kitty tries to recruit her into a shoplifting racket, with the promise that her gangster friends have political connections which will speed her release. The audience roots for Marie to stick her guns and not accept Kitty's offer, but circumstances pile up that finally make it seem less and less possible.

The two sides struggling for Marie's soul are led by Agnes Moorehead's sympathetic progressive superintendent Benton and Hope Emerson's villainous matron Harper. Moorehead invests her character with not only compassion but also strength and wit, which shapes Benton into something much more than a bleeding heart. Meanwhile, Emerson's ability to ooze subtle cruelty and show Harper deriving sadistic pleasure from abusing her charges makes for a tour-de-force performance that could have been ripped from a horror movie.

Caged succeeds not only because of its perfectly cast ensemble of actresses, but also because of the note-perfect direction by John Cromwell (1937's The Prisoner of Zenda) and the tightly constructed script by Virginia Kellogg -- who reportedly went undercover as a prisoner for research. Though the dialogue is often hard-boiled, the situations stark, and the lighting expressive, it feels wrong to pigeonhole Caged as a film noir. In fact, what's most commendable about Caged is the way it incorporates so many stylistic elements, including hints of family melodrama and situation comedy, and allows them to enrich the main muckraking narrative. The filmmakers gave themselves an incredibly tricky balancing act, but the film lacks a single false moment.

Before this viewing, I had only known about Caged from its appearance as clips within the documentary The Celluloid Closet, which focused on the representation of lesbian characters within the film. Based on those clips, I assumed this must be a pulpy B-picture. With its title and subject matter, others might also find that an easy mistake to make, but it's a unfortunate one. This film is not a thoughtless, thrown-together, exploitative cheapy. Instead, Caged is a carefully crafted, beautifully executed, unheralded masterpiece. 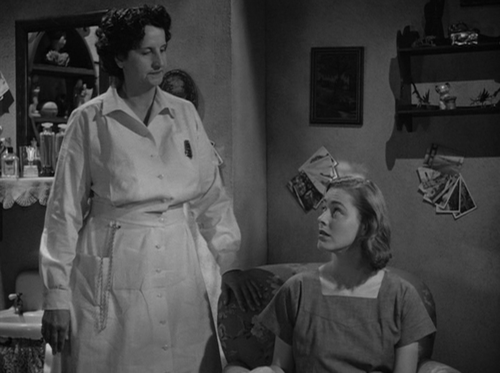 The DVD
Caged is back in print via the Warner Archive Collection of manufactured-on-demand DVD-Rs. This is a precise dupe of the original DVD that came in the 2007 Cult Camp Classics 2: Women In Peril box set, featuring the same menus and subtitle options.

The Video:
Normally, you take your chances video-wise with a Warner Archive release, but this standard 1.37:1 presentation is top notch. The level of fine detail is fantastic for a standard-definition transfer, with very little speckling and dirt to interfere with the picture. I also noticed almost nothing in the way of compression artifacts or other video noise. This is just great-looking.

The Audio:
The Dolby 2.0 mono audio is also in fantastic shape, with no noticeable hiss or pops. The dialogue is all completely intelligible and Max Steiner's score sounds impressive. Since this is just a remake of the old release, this disc actually offers subtitle options: English, English SDH, French and Spanish subtitles.

Final Thoughts:
I love pulp stories as much as the next scumbag, but it irks me that this wonderful drama has fallen through the cracks because of its genre trappings (sorry, WB, this is not a "Cult Camp Classic"). This is a brilliant film that has been given an excellent A/V presentation. If you haven't already seen it, you need to check this one out. Of course, it would be nicer if this wasn't an MOD release, but at least the title is still in print. Highly Recommended. 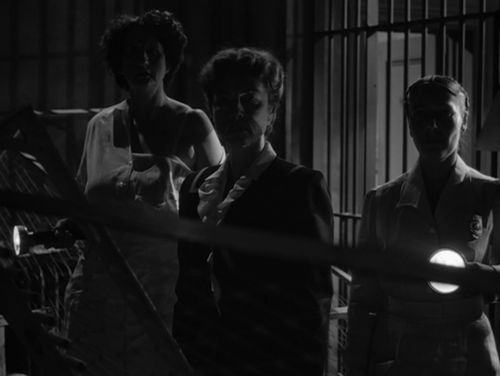