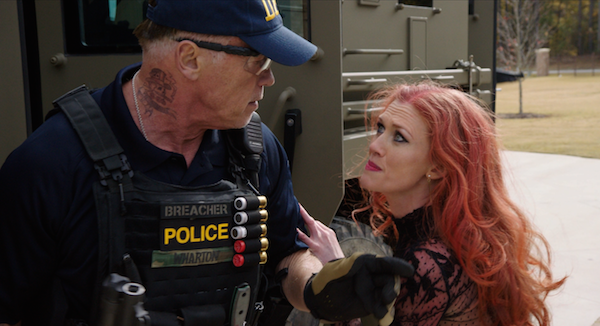 By emphasizing director and co-writer David Ayer's previous work on End of Watch and Training Day, the advertising for the new Arnold Schwarzenegger action flick Sabotage clearly wants to connect this film with the unvarnished, realistic style of those two films. Unfortunately, anyone expecting another day-in-the-life-of-a-cop drama, except with DEA agents this time, may be startled (or just disappointed) by this wholly different animal.

Schwarzenegger stars as John "Breacher" Wharton, the head of a rough-and-ready team of Special Ops DEA agents. Though these agents are all played by skilled actors, like Terrence Howard, Sam Worthington, and The Killing's Mireille Enos, and though the characters all have cool nicknames like "Neck" and "Pyro" and "Monster," they all feel like minor variations on the same amped-up, thick-necked cliché. This two-dimensional characterization would be more of a problem if it didn't turn out that Sabotage is essentially a cop movie mated with a slasher film -- like a remake of I Know What You Did Last Summer where all the victims are muscle-y, tatted-up supercops with questionable hairstyles.

Breacher and his team are marked for death after they bust up a mansion belonging to a Mexican drug cartel, uncover an enormous cube of cash in the basement, and proceed to skim ten million dollars off the top for themselves. When they go to retrieve their heisted loot from its hiding place, it turns out someone else has gotten there first and left a single bullet in place of their money.

Even though Breacher's team torched the mansion, the DEA knows that ten mill wandered away from the scene and puts Breacher and Co. under a microscope for more than half a year. In a rare funny scene in the film, one of Breacher's colleagues harasses him in the men's room, saying Breacher should just spend his stolen money. Ever the professional, Breacher pulls the guy's handgun out of his holster, tosses it in a nearby urinal, and flushes.

Eventually, the higher-ups lose interest in the stolen dough when no one on the team spills the beans, so Breacher's crew are all reinstated. Unfortunately, the time off has given everyone time to ruminate on the possibility of betrayal within their ranks, severely undermining their effectiveness as a unit. If that's not bad enough, someone has started killing members of the team in elaborately grotesque ways. Is it the cartel? Is it someone on the team? Is it John Doe or Buffalo Bill? Local cops Caroline (Olivia Williams, effectively tough but with a questionable Southern accent) and Jackson (Harold Perrineau) find themselves thrust into the middle of this mystery. Jackson is already in awe of Breacher -- calling him a "drug war god" -- and Caroline finds herself slowly sucked in by this enigmatic but hyper-effective lawman.

Sabotage is at its weakest during the hangout scenes that are supposed to establish the testosterone-marinated camraderie of the team (even Enos as the team's sole female, Lizzy, "bro"s it up like the rest). Mostly, I found myself just wanting these guys to shut up and shoot stuff. Fortunately, for much of the film, they do. In fact, I'm willing to forgive most of the weaknesses of Ayer and Skip Woods's script just because Ayer proves himself to be an excellent director of chaotic action sequences. He not only unleashes plenty of onscreen mayhem but utilizes suspense effectively, keeping the audience on-edge between bursts of gunfire.

Sabotage seems unsure if it wants to be The Silence of the Lambs or if it's happy just being Predator. The ending of the film -- which paints Schwarzenegger's character as kinda-sorta an anti-hero but also gives him triumphant closure -- does little to clear up the confusion. 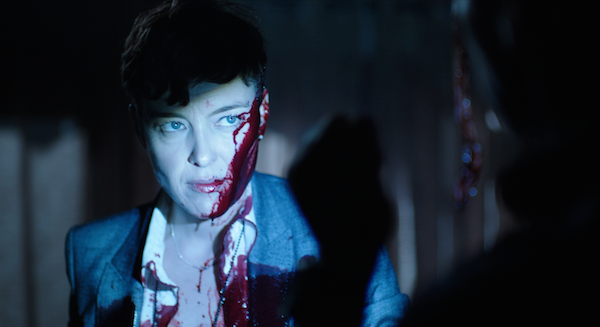 The Blu-ray
Sabotage comes in a combo pack with the Blu-ray and DVD versions of the film, plus a download code. The Blu-ray has one bonus feature not included on the DVD.

The Video:
As per usual with their new releases, Universal has given us a pristine AVC-encoded 1080p 1.85:1 presentation. No noticeable compression issues to complain about. The details are crisp and distinct, even during the most frenetic action sequences. The colors are appealingly saturated and the blacks are deep and rich.

The Audio:
The DTS-HD MA 5.1 audio track is perfectly designed to tick off your neighbors. To keep the peace, I found myself raising and lowering the volume as the film alternated between chaotic shootouts and more sedate dialogue scenes. For those folks who don't live in an urban apartment building, feel free to crank it up. The atmosphere is immersive, the sounds that go pow... go pow exceedingly well, and the LFE is robust. Everything else comes through perfectly crisp and clear. No alternate audio, but the disc offers English SDH, plus French and Spanish subtitles.

(Blu-ray Exclusive, HD, 11:03 total) - There are two different endings that can be played separately or together. Even though they come first on the Extras menu, these endings make better sense after watching the deleted scenes, since the final "deleted scene" is actually the lead-in to these endings. Both of these alternates make Schwarzenegger the clear-cut villain of the film, unlike the final cut which makes Arnold's morality a little more ambiguous.

Final Thoughts:
Sabotage is a mostly entertaining mixed-bag. I found this flick much more interesting when it strayed off into subplots that had little to do with the crooked crew of DEA agents that are the center of the film. On the basis of its uniformly exciting action sequences and the satisfactorily diverting subplot with Olivia Williams, this flick comes Recommended. 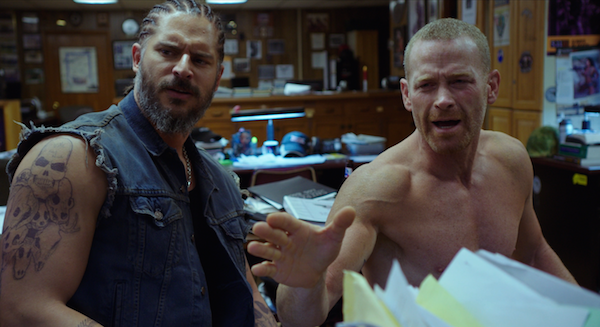