Trip to Italy, The 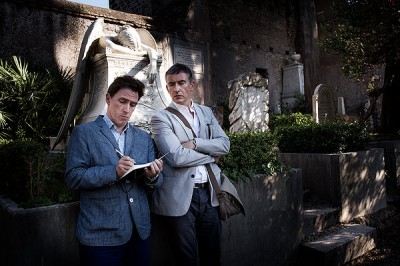 There's a joke in The Trip to Italy where Steve Coogan teases his friend Rob Brydon about being an acquired taste. Rob has just had an extramarital dalliance on the Italian coast, the sort of thing Steve is usually the one to engage in, and so Steve zings Rob by telling him it was only a matter of time, someone would develop the craving eventually. Though not intended as a meta joke about the Trip series, it could just as easily nestle next to the Godfather comparisons or the thinly veiled jibes about the reality of true-life fiction. If you liked the original The Trip, then you know what the flavor is and you're going to enjoy the follow-up in equal measure, if not more. If you haven't tried either installment yet, it shouldn't take you long to know if they're the kind of thing you'll want to partake of again and again.

As with the 2011 original, Rob and Steve, playing themselves, go on the road in search of good food and the best Michael Caine impression. Behind the camera is Michael Winterbottom (The Killer Inside Me, Trishna), who is also credited as writer, but one would gather that there is as much improvisation between the two friends as there is scripted dialogue. Over the course of a week, the fellows travel from place to place, bickering and taking potshots at one another, sample some food, and get into trouble. Rob does endless impressions, some of them good and some of them ludicrous. Steve looks fatigued. They are joined by friends and relatives. And then the journey is over.

The transplant to Italy has not made this Trip any less amusing, but Witerbottom takes full advantage of the country's cinematic history. There are references to several famous films set in Italy, with an emphasis on those with bittersweet and unhappy endings, including Roman Holiday and Godard's Contempt. There is also mention of Roberto Rossellini's Voyage to Italy, a classic of Italian Neorealism, an aesthetic that Winterbottom has borrowed from heavily in his career and a tradition to which The Trip to Italy owes much of its approach. It seems that it's in ode to this--as well as to the romantic poets whose own travels Rob wants to shadow--that a little melancholy creeps in. Both men spend much of their adventure trying to connect with loved ones back home and pondering just what it's all for.

It's been about three years since I saw The Trip so I don't recall for sure, but I don't believe it ended on as down a note as the sequel. My early impression, though, is that the added sadness allows The Trip to Italy to be a far richer experience. I probably laughed less but I felt more. Steve Coogan takes more of a back seat in the early portion of the movie, it's almost as if we are watching him warm up, but it makes sense for the opposing trajectories he and Rob are taking. Both men are feeling their age, but one seems to be figuring something out while the other is struggling with a newfound confusion.

Which isn't to suggest you're going to leave The Trip to Italy bummed out. Quite the contrary. As Brydon insists during one of his riffs, he is an affable presence, and despite being the grumpy gus, Coogan is pretty enjoyable to be around, too. As with the first film, and with any vacation you might actually take, some places are more fun than others, and sometimes you like your companion more than you do at other times, but that's part of the shared experience. You laugh, you hurt, and you see the sights--sometimes all at the same moment. 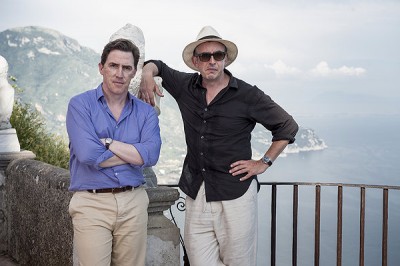