Marquee names in almost anonymous independent films are sometimes a joy to watch. And when a marquee name appears in a movie, albeit in a role where they are virtually indistinguishable, a larger philosophical question beckons. If a top shelf star appears in a movie where nobody sees them, did they even appear in the movie? Oh well, I digress.

Frank was co-written by Peter Straughan (Tinker Tailor Soldier Spy) and Jon Ronson. Lenny Abrahamson (Adam & Paul) directed. Before getting to Frank, the story's first and predominant focus would appear to be Jon Burroughs (Domhnall Gleeson, About Time), who lives at home with his parents but has musical inclinations. They have some roots in composing and keyboards, but he does not have the chops of a fully polished artist. A fluke encounter with a band finds him with the chance to sit in on a gig in the club in his town, invited by the band's manager Don (Scoot McNairy, Touchy Feely). He plays keyboard next to a French guitarist who does not speak English, a female drummer who rarely speaks, period, and Clara (Maggie Gyllenhaal, Crazy Heart), who plays(?) the Theremin. The front man of the band in Frank, played by Michael Fassbender (The Counselor). We do not see Fassbender, we only hear him; he wears a large paper-mache head and does not take it off. Not for eating, not for showers, not for performing, not for anything. Jon's one-time gig becomes permanent as he and the band go to a remote Irish home in the countryside to record an album, and we learn more about Jon and the band, named The Soronprfbs.

For those familiar to it, Frank appears to be loosely based on Frank Sidebottom, a character created by the late British musician and comedian Chris Sievey. As it turns out one of old Sievey's band members was Jon Ronson. How much of Ronson's knowledge of Sievey played into the script that became Frank is unknown to me, but as a viewer, we get into Frank very nicely. At one point Jon catches Frank without a mask in a shower, but the curtain is pulled back and Frank not only has another head on, but a clear plastic bag to protect it, because why not? Makes perfect sense. 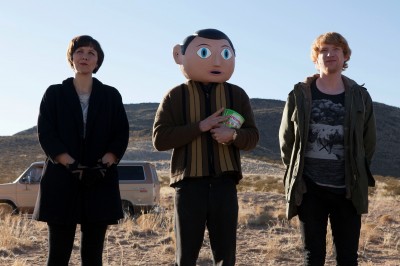 As recording goes on, Jon gets deeper and more consumed by his own dreams and how he can try and use Frank's creative energy and channel it into his own vitality. The funneling is subtle at first, and when news of the band's appearance at South by Southwest in Austin, Texas, things tend to accelerate for all involved. Clara sees through Jon's motives before Jon's realization of it and the tension also escalates over the course of the movie. But as the way the film unfolds, this tension and Jon's motives are laid out more comically and lighthearted. We spend more time laughing at what is going on with Frank and with the band, and Fassbender's occupation of Frank through most of the film is a joy to see. There appears to be a moment or two when Fassbender is not under the mask (the scene with the guitar for starters), but otherwise his performance is a nice change of pace.

While Fassbender's work is enjoyable, the storytelling in Frank is somewhat erratic. The film spends time between Frank and the head, and with how dour and the drab the band is. In terms of non-paper mache wearing members of the band, there is almost a subtle race to see which band member is the cleverest for the room, so to speak. With all the time spent looking at Frank and his head, the film gets swept up in the gimmick as well, until realizing that there is an ending it needs to get to. The ending is decent and the last scene in it is slightly touching, but it feels like Frank would have done better with smarter storytelling in the first and second acts. The Clara character feels like a waste of her talents without more exposition given to her, and Gyllenhaal is good (she does a good version of "On Top of Old Smoky"), just not used well.

I think with moments of slightly more emotional weight and 10-15 more minutes of effective storytelling, Frank could have been a good movie. And while a gimmick of a Hollywood star with an oval-shaped mask covering his head for most of the film turns out to be surprisingly enjoying, once the story breaks free from it is when the problems start to happen. It is not a bad movie, just one which underachieves.