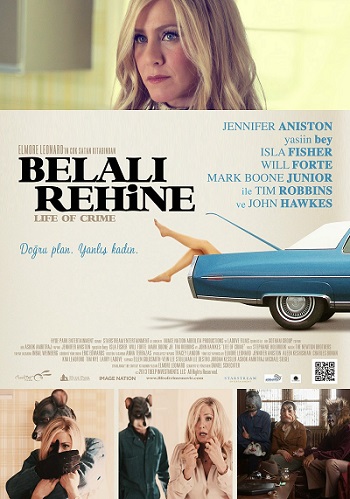 Hollywood loves Elmore Leonard. Maybe they don't love him as much as oft-adapted horror icon Stephen King, but the western and crime author has had more than three dozen adaptations made from his writing, including a particularly strong run of flicks in the late '90s: Get Shorty, Out of Sight, and Jackie Brown. The new Leonard adaptation Life of Crime (based on the novel The Switch) desperately wants to be spoken of in the same breath as those three top-notch adaptations. It even shares some DNA with Jackie Brown, by featuring younger iterations of two characters from that film, Ordell Robbie (yasiin bey [the former Mos Def]) and Louis Gara (John Hawkes).

But while screenwriter-director Dan Schechter is smart enough not to style Life of Crime as an explicit Jackie Brown prequel, he doesn't have a discernible point-of-view to bring to the material either. There are moments where the film, presumably taking cues from the book, will veer toward dark comedy or romantic drama, but mostly it occupies an indifferent tonal middle ground. The cliche goes that the majority of directing is just casting, and it seems as if Schechter hoped that if he peopled one of his favorite books with a cast of ringers, then everything else would just fall in line. And I'll be honest, it works most of the time.

In addition to the venerable Hawkes and bey, the film also features Jennifer Aniston as a suburban housewife dogged by ennui named Mickey; she is kidnapped by Ordell and Louis to extort money out of her crooked husband Frank (Tim Robbins). Character actor Mark Boone Junior, of whom I've personally been fond since his appearance in Steve Buscemi's Trees Lounge almost twenty years ago, appears as Richard, an overweight white supremacist who provides the safe house (covered in Nazi memorabilia) for the kidnappers to stash their kidnappee. Adding a wrinkle to the proceedings is Will Forte as Marshall, an admirer of Mickey who attempts a surprise seduction during the kidnapping and gets locked in a closet with a bump on the head for his trouble. Rounding out the ensemble (and adding an even bigger wrinkle to the plot) is Isla Fisher as Frank's lover, Melanie.

You see, Frank has decided to divorce Mickey to be with Melanie, so when the phone rings with the message that his wife has been kidnapped, Frank is given pause. Of course, he doesn't want anything especially bad to happen to Mickey, but he doesn't really love her either.

In other words, it's basically Ruthless People, except without as many laughs or surprises. Those '90s Elmore Leonard movies are memorable for colorful characters, snappy dialogue, and maybe most of all, layered plotting that is as fun to watch in the build-up as it is in the payoff. Life of Crime has those first two elements pretty well nailed down, but is lacking in the third area. The film has an ensemble of characters with seemingly conflicting desires, and yet there's relatively little tension throughout about who's going to do what to alter the course of this simple (but badly conceived) caper. Apart from a few setpieces with white supremacist Richard that recall the electrifying and unforgettable scene with "Whiteboy Bob" on the stairs in Out of Sight, all this conniving and maneuvering lands us pretty much where we could have expected to end up during the first five minutes of the movie.

Still, Life of Crime is more entertaining than it has any right to be. The chemistry between Hawkes and bey as a couple of fellas who are in over their head, and yet are able to take it all in stride, is magnetic and a real pleasure to watch. Aniston and Robbins do good work with what they've got, although the script doesn't give them quite enough room to make their characters full-blooded humans. Boone and Forte get the widest range of scenes to play, between humor and seriousness, between human frailty and human ugliness; they're so good that I don't even mind that I can't figure out what purpose Forte's character serves in the overall scope of the film. Only Fisher really disappoints, though it just feels like a matter of miscasting rather than anything she's doing specifically wrong.

Despite its ambitions, Life of Crime is not an Elmore Leonard classic. It's also not a misfire in the vein of The Big Bounce either. Instead, like the remake of 3:10 to Yuma, it occupies the middle ground: it's entertaining but unlikely to stand the test of time.

The Blu-ray
The Life of Crime Blu-ray comes with a code for Ultraviolet streaming.

The Video:
There are quite a few inconsistencies in the AVC-encoded 1080p 2.35:1 presentation we have here, but I'm left to assume that most, if not all, of this is not the fault of the encode. Life of Crime is clearly a low-budget film. The digital cinematography by Eric Edwards (My Own Private Idaho) looks more like a mid-budget cable drama than a feature film. The use of green-screen shots are poorly integrated. Various moments throughout the film, including those effects shots, look oddly washed-out with milky blacks. Sometimes it looks intentional, like they fogged up the location for an effect, though other times it just seems like awkward color-correction. The fine detail reproduction is excellent, and the colors are strong overall, so only nitpickers like me will probably really be put off by the look of this flick.

The Audio:
Life of Crime has a few big action moments that are nicely handled by the DTS-HD MA 5.1 audio mix, as well as handful of period-appropriate music selections including the throwback funk score by The Newton Brothers. Mostly, though, the flick is dialogue-driven, with some minor atmosphere in the surround speakers. The disc offers dubbed Spanish Dolby 5.1 audio, as well as English and Spanish subtitles, plus English SDH.

- An awfully entertaining commentary track that benefits from the excellent rapport between the director and actor.


Final Thoughts:
The cast elevates a middle-of-the-road Elmore Leonard adaptation. Most of the bonuses provide solid added value for the folks who are pondering a purchase, but I figure most viewers will be satisfied just to Rent It.