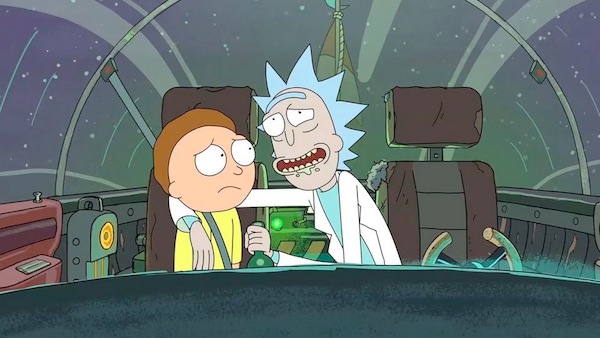 Springing from the minds and mouths of Justin Roiland (House of Cosbys) and Dan Harmon (Community), Rick and Morty is an animated sci-fi comedy that is so outlandish and reality-bending that it's hard to believe they actually air it on television. (But, then again, that's pretty much why Cartoon Network's Adult Swim was created.) Despite a bumpy first episode, the newly released Blu-ray of the complete first season presents a cult show with the promise to linger in the cultural memory for generations to come.

The show follows a brilliant but cantankerous and alcoholic mad scientist named Rick Schwartz and his less-than-brilliant, self-esteem-deprived 14-year-old grandson Morty Smith (both voiced by Roiland). When they're not bickering, they travel through other dimensions and get ensnared in countless overblown, mind-blowing adventures. The characters are at least partly modeled on Doc and Marty from the Back to the Future movies -- pointing to the creators' obvious fondness for the storytelling tropes of '80s high-concept blockbusters -- but Rick and Morty's adventures just as often echo the nihilistic randomness and bleak hilarity of Douglas Adams's Hitchhiker's Guide to the Galaxy. For example, one of the best episodes of the show's first season, "Rick Potion No. 9," begins with Morty asking Rick for a love potion to use on his crush (not an unfamiliar story device) that climaxes with the world's entire human population being turned into hideous deformed mutants that Rick nicknames "Cronenbergs" (after the director of The Fly).

As with so many post-Simpsons animated sitcoms, Rick and Morty is also largely about a semi-functional nuclear family. Rick's daughter Beth (voiced by Scrubs' Sarah Chalke) is a horse surgeon married to a mediocre ad-man named Jerry (voiced by Archer's Chris Parnell), and together they have two kids: Morty and his older sister Summer (Greek's Spencer Grammer). While at first it seems like the writers intend to use the family as a grounded counterpoint to the crazy adventures of our main characters, it doesn't take too long before all the members of the clan find themselves ensnared in the messes created by Rick. In "M. Night Shaym-Aliens!," Jerry finds himself abducted by aliens (whose leader is voiced by David Cross) and placed into a poorly constructed simulation of Earth by which he is nonetheless completely convinced (poor Jerry). In the Zardoz-mocking episode "Raising Gazorpazorp," Summer makes Rick bring her along to the far-flung planet of Gazorpazorp to find a home for the half-alien/half-human that Morty has just fathered (long story).

As one would expect based on Harmon and Roiland's past work, the show is chock full of pop culture homages and rip-offs. "Lawnmower Dog" not only references the forgotten 1992 thriller The Lawnmower Man in its main story, but it has an intentionally super-convoluted subplot with Rick and Morty traveling through dreams in a blend of Inception and the Nightmare on Elm St. movies. "Anatomy Park" is a mish-mash of Jurassic Park, Fantastic Voyage, and Predator, set inside the body of a dying homeless man. ("Anatomy Park" is also the first season's Christmas episode, of course.) Alfred Molina makes a guest appearance as the devil in the Needful Things parody, "Something Ricked This Way Comes." The season finale, "Ricksy Business," largely deals with a Titanic re-enactment gone awry (you know, the boat misses the iceberg and doesn't sink).

But much more than the recognizability of its influences, the success of the show so far largely stems from the writers' conflicting desires to tell emotionally resonant, well-structured stories in a sci-fi/fantasy milieu while pitching silly and/or off-puttingly gross and/or batshit and/or fourth-wall-busting jokes that could just undermine the whole thing.

The fan favorite episode "Rixty Minutes," is a perfect example of this tension being exploited to the fullest. The main "story" of the episode involves Rick and Morty flipping channels on a TV that has the ability to broadcast programs from every dimension. This conceit gives Roiland the opportunity to just babble semi-coherent comic premises -- like when he's a Crazy Eddie-type appliance store pitch man whose hook is that his eyes are crawling with ants (so he can't see the price tags on his products) -- which the animators then gleefully bring to ridiculous life. The secondary story has Jerry, Beth, and Summer in the other room, using a pair of goggles that can show them what their lives look like in alternate realities. Jerry and Beth are astonished to see successful versions of themselves, while Summer is horrified to see that she only exists in timelines where her parents decided to not get an abortion and gave up their dreams instead. The fact that these two tonally divorced stories end up dovetailing -- bringing together the two warring creative impulses of the writing, and doing it in a way that makes the whole episode far greater than the sum of its parts -- illustrates the real genius of Rick and Morty. 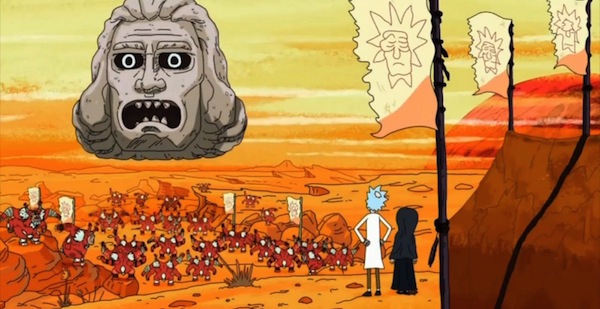 The Blu-ray
All 11 episodes of season one, plus all of the bonuses, are included on a single Blu-ray disc. A code for Ultraviolet streaming is included. The first printing of this release also comes with a real-life version of "The Good Morty," the evangelical cartoon book seen briefly in the episode "Close Rick-counters of the Rick Kind."

The Video:
Apart from jagged lines now and again, the VC-1-encoded 1080p 1.77:1 video for these cartoons is excellent. The details are sharp, the colors are vibrant, and the blacks are rich and inky. No noticeable noise or other major compression issues to report.

The Audio:
As you'd expect for a new production, the Dolby TrueHD 5.1 audio is completely damage-free and offers a full-range sound. Even during the handful of action scenes, the soundtrack isn't quite room-shaking, but it offers a high-quality ambience to the show's otherworldly settings and nicely serves Ryan Elder's extremely effective musical score. As for subtitles, the disc offers English SDH.

- Listening to drunken audio commentary can be a very special experience. The fellas from South Park single-handedly invented and perfected this subgenre with the commentary on their first movie, Cannibal! The Musical. That commentary mixed off-color jokes with uncomfortable personal revelations that greatly enriched the viewing experience. This batch of commentaries -- which features a rotating crew of commentators, including composer Ryan Elder; writers Ryan Ridley, Eric Acosta, Wade Randolph, and Tom Kauffman; and directors Bryan Newton and Stephen Sandoval -- highlights Dan Harmon and Justin Roiland at varying level of drunkenness throughout. This results in not-so-many personal revelations, but plenty of off-color jokes. Roiland frequently cat-calls the female characters onscreen while Harmon chides him. However, Harmon also busts out one of his signature "I f**ked your mama" raps (as heard on his Harmontown podcasts), so he doesn't really have the moral high ground here. Overall, it's a chatty, jokey, entertaining collection of commentaries that I don't recommend listening to in the presence of your mother. 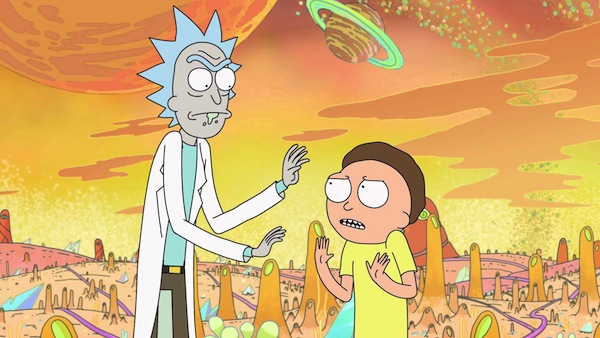