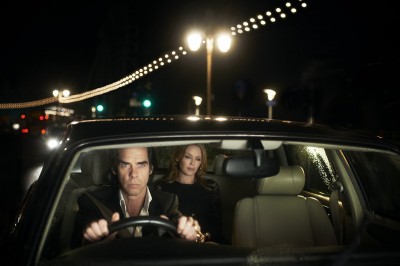 I got to see Nick Cave & the Bad Seeds on their tour earlier this year. I think it was my third time seeing the band, though it had been something like ten years since the previous outing. As good as those other shows were, this last go-around, with the group focusing on their most recent recording, Push the Sky Away, was something else altogether--a mass hypnosis, a group metamorphosis, a purging of ideas, and a cleansing of the brain. One assumes it was what Jim Morrison imagined himself doing if he really was up there fantasizing about doing the cha-cha with a Native American chief, but unlike Morrison, Cave wasn't crawling up his own ass in search of some kind of revelation of the self. Cave was propelling himself into the crowd, all sweat and tremolo, and bringing everybody in.

As a companion piece to this experience, 20,000 Days on Earth is an astonishing dissection of why Nick Cave does what he does. Though, having seen him in concert is not required for entry. You'll get glimpses of what he does on stage in the movie, and regardless of how much or how little you are aware of the man and his art, you will be mesmerized by how he cracks himself open and how filmmakers Iain Forsythe and Jane Pollard set about putting him back together again. A musician who has led multiple bands, a screenwriter known for The Proposition and Lawless, a composer who scored those films and others alongside his collaborator Warren Ellis, a poet, a novelist--Cave's career has encompassed all these things and more. He has given lectures on writing love songs and crafted essays about reading the Gospels, and his songs have been full of confessions, both clear-eyed and abstract, yet he's never delved so deep nor shared so much. 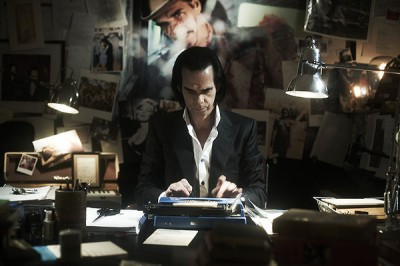 That is, if this is not another performance unto itself. If it is, does it matter? Certainly it says something about the minstrel taking center stage either way.

How to describe 20,000 Days on Earth? It is faux-biography, faux-documentary, and yet both things in truth. The premise is that the movie begins on the morning of Cave's 20,000th day of life, placing him somewhere roughly in the back end of his 54th year. At the time, the band is working on Push the Sky Away, with particular attention paid to the song "Higgs Boson Blues," the filmmakers coming back to the rehearsals and the recordings like Godard zeroing in on the Stones hashing out "Sympathy for the Devil." Spliced in between is Cave's own musings, and staged conversations with past associates in Cave's car--including actor Ray Winstone, singer Kylie Minogue, and refugee-Bad Seed Blixa Bargeld--talking about what they did together, how they did it, and each person's perception of themselves and their friend. There is also an extended sequence of Cave poring through the archives, reminiscing over old photos, piecing together the bits and bobs. His monologues act as extended therapy sessions, and there is even a facsimile of actual psychoanalysis as part of a sit-down interview.

All of these elements are drawn together as a patchwork of the man. His approach to his work is as dramatic and pretentious as the end result can often be, but the level of insight into both the man and the troubadour is unprecedented. What could have been just a bunch of scattered pieces, a kind of cut-up technique a la William S. Burroughs, is instead a deviously self-conscious arrangement of sound and image that makes flesh of the ephemeral.

20,000 Days on Earth is one of the very best documentaries of the year, possibly the best film about music, and maybe even one of my favorite movies of 2014, period. For anyone who ever dreamed of expressing his or herself through any kind of art, or just folks who have always wondered how someone like Nick Cave does what he does, 20,000 Days on Earth is an absolute must. 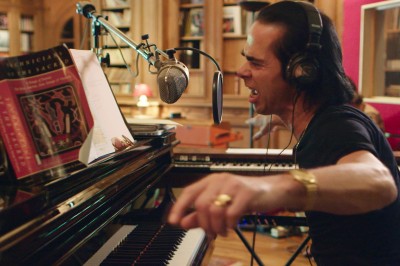