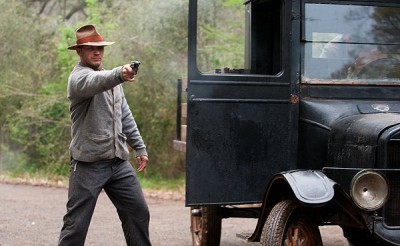 Lawless is the latest in a long line of motion pictures set during American Prohibition, reinforcing our country's love of outlaws and the mythological tradition of anti-heroes who did bad things because caving in to "the Man" would be a whole lot worse.

Based on the true story of the Virginia-born Bondurant family, as chronicled in Matt Bondurant's book The Wettest County in the World, Lawless reteams writer and musician Nick Cave with director John Hillcoat, who previously redefined the Australian western via their bloody tale of brotherly vengeance, The Proposition. Lawless is a bit of a distant cousin to that violent action movie. It focuses on the three Bondurant siblings, arranged here in order of size: Howard (Jason Clarke, Public Enemies), Forrest (Tom Hardy, The Dark Knight Rises), and Jack (Shia LaBeouf, Transformers). Forrest is the leader of the crew, a backwoods philosopher who says little, but when he does extend his sentences beyond monosyllabic grunts, it's usually to impart some dark philosophy of how the world is really run. Forrest has fostered a myth that he and his brothers cannot die, and the evidence to back this up is likely just a result of how much he really believes his own poppycock. The stuff you will see done to him in Lawless is both cartoonish and disturbing...but more on that later.

The Bondurants, and much of the Virginia countryside they call home, have taken to moonshining as a way to make money. While much of the product stays local, the majority of it trickles down to Chicago, where gangsters like Floyd Banner (Gary Oldman, Tinker, Tailor, Soldier, Spy) are engaged in their own war with the law over the particulars of Prohibition. Realizing that the source of the liquor is just as much of a problem as the hoodlums who distribute it, special lawmen are assigned to shut down the outlying areas. Chief among them is a perfumed masochist by name of Charlie Rakes (L.A. Confidential's Guy Pearce, who appears to be doing some strange impression of Jon Crier on Two and a Half Men). Rakes looks down his nose at the mountain folk, and he sees Forrest Bondurant's reputation as a personal challenge. What tough customer wouldn't want to expose the vulnerability of the invulnerable? 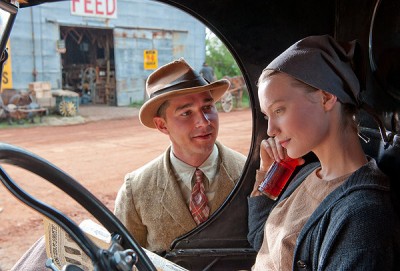 Mixed in all of this is Jack's desire to grow up and be a heavy, as well as his wish to impress the daughter of the local Mennonite preacher (she is played by Mia Wasikowska of The Kids are All Right and Jane Eyre). Adding an extra love interest is Jessica Chastain (The Tree of Life) as Maggie, a city girl who has come to the country to get away from a troubled life in Chicago. Naturally, much of that trouble finds her anyway. She ends up working at the Bondurant restaurant, and she and Forrest have an instant attraction.

The plot of Lawless deals with Forrest's refusal to kowtow to Charlie Rakes and his corrupt boss, and Jack's further complicating matters by getting in with Floyd Banner and fancying himself a big man. I normally don't really care for Shia LaBeouf, but Hillcoat harnesses all of the actor's wussy powers to turn him into a the world's littlest gangster. LaBeouf is (un)surprisingly convincing as the sniveling younger brother, full of bravado he hasn't earned and quick to crumble. Though Jack does experience some growth, it's not enough to undermine Shia's credibility (i.e. it doesn't push the puny thespian into territory he can't handle).

As with The Proposition and The Road, Hillcoat isn't afraid to get down into the mud and the murk to show just how brutal these violent scenarios really should be. Lawless walks the line between exploitative trash and cautionary tale. You root for the criminals, but only because the lawmen are so bad, and you do feel a little dirty for it. The gory fights are both thrilling and repulsive, and even despite Forrest's near superhuman strength, Hillcoat at least shows there are real consequences. The wounds are never pretty, and the victors usually stagger away from the bout rather than swagger. Lawless is lurid, pulpy fun, but it's also unsettling. I might enjoy watching the Bondurants, and I'd rather see them win than Rakes, but Lawless never made me want to be them. 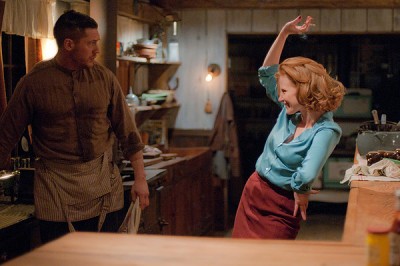 My complaints about Lawless are otherwise minor. The story is a bit untethered at times, making the film seem a tad long. Cave and his musical partner, Warren Ellis, provide another haunting score, though I wasn't too keen on some of the anachronistic sounding vocal numbers (including a bluesy take on the Velvet Underground's "White Light/White Heat"). Looking past those two things, there is much to enjoy--and also to look at. Benoît Delhomme's grimy cinematography at once captures the beauty of the open countryside and the filthiness that comes with the dirty business everyone is involved in. The few glimpses of Chicago have an almost otherworldly feel, as if city life is, by its nature, manufactured and separate. The cars and the clothes Jack buys for himself are period authentic, but next to his brothers' more practical outfits, he looks like he's playing dress-up. Much in the same way Ranks' dandy suits, complete with driving gloves, look like a supervillain's costume.

Lawless may be my least favorite of John Hillcoat's movies, but that's like disparaging an Olympic athlete for merely getting a bronze. Two people may have performed better than you, but you're still really good. It's an unrelenting, unflinching portrait of the darker side of human endeavor, an example of how self-proclaimed survivors often survive at someone else's expense. Lawless is dark and cruel, and it's a thoroughly engrossing slice of Americana. It's apple pie, but made with apples soaked in whiskey. Which sounds pretty good, don't it? Guess it just took a couple of Australians to show us the recipe. 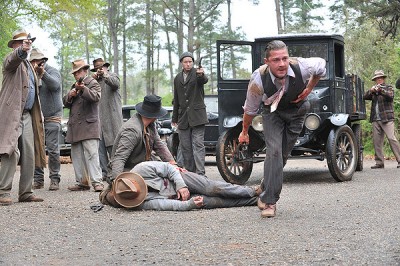