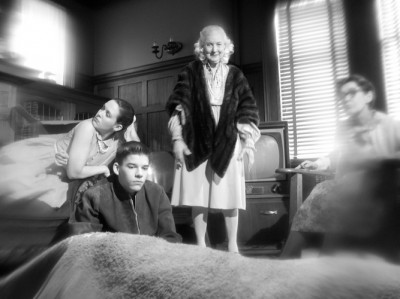 Guy Maddin has always been a filmmaker torn between his nostalgia for old cinema and his forward-thinking filmmaking techniques. His appropriation of antiquated styles in movies like Brand Upon the Brain! and The Saddest Music in the World were clever allusions, throwbacks clearly made using current technology with a progressive and irreverent approach to narrative. Something has always driven the Canadian director to reach back and pull the past into the here and now.

In My Winnipeg, his 2007 film, a self-described "docu-fantasia," the past Maddin digs into is his own. As the name might suggest, My Winnipeg is a tribute to the city, his city, his hometown--the Canadian burg that is said to be the geographical center of North America. It is also a tribute to his mother, whom he brings alive via re-enactments of events from his childhood. He considers her influence, and re-examines difficult moments, and, as his narration tells us, even drags her into the experiment, eager to see what she will learn through this trip down memory lane.

Except, of course, he doesn't really, because that's not his actual mom on the screen, but instead an actress named Ann Savage--a fact he cheekily withholds even as he informs us that all the versions we see of him and his brothers and sister as kids are just stand-ins. It's all part of the dreamscape he creates from the get-go, establishing a surreal version of history that he inserts himself into, teasing the audience with the strange lore of the place where he grew up. Horses frozen in an ice storm, Russian hockey players, labor strikes, trees growing in the middle of the street--these are all meant to be a part of the myth and legends of Winnipeg. But how much of it is true? Does it matter?

Of course not. We are told right there in the title. This is Guy Maddin's Winnipeg, his fanciful recreation of the places that informed who he is. There is never any question that he is an unreliable narrator--the movie is framed by his flight from the city, his attempt to get away, but we know he has no intention of leaving, he loves it all--and it's the lies he chooses to tell that inform our true opinion of the man and his origins. These fictions he creates, these myths he makes, they are a tribute to all the things he says they are, but they are also a tribute to his real love: storytelling. The kind of storytelling that goes on in a small community, the kind of fibs a child imagines to make the world around him seem more interesting, and the kind of daydreams that really do break the Guy Maddins of the world out of their humble beginnings and turns them into internationally renowned motion picture directors.

It's fun and intriguing and just generally delightful to watch. My Winnipeg is an autobiography unburdened by reality or truth, and thus far more emotionally honest and revealing than most tracts that try to tell it like it "really is." 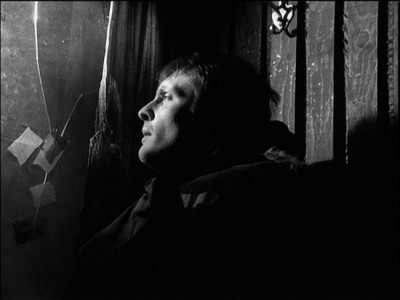 Video:
The new high-definition digital transfer shows My Winnipeg in its original mix of black-and-white and occasional color at a 1.33:1 aspect ratio. Image quality is excellent, only occasionally revealing its lo-fi sources (most notably in the actual archival footage). Resolution is sharp and there are no marks on the frame.

Sound:
The soundtrack is mixed in 2.0 DTS-HD Master Audio and has nice weight. Tones are clear, and there is no hiss or extraneous noise.

Extras:
As with all Criterion discs, this one comes with a paper insert that also serves as a fold-out poster. On the side opposite the illustration is a critical essay and information on the movie. 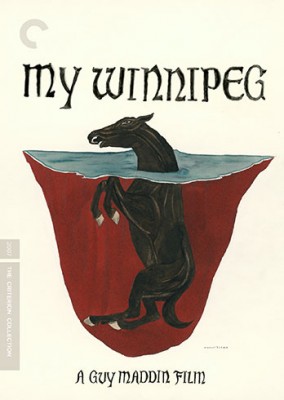 Maddin has an extended conversation with art critic Robert Enright on the disc, and excerpts from it also serve as introductions to three of the short films gathered here. The main chat is just over 50 minutes and digs deep into what Maddin was doing with My Winnipeg, working through the technique and also the separation of fantasy and reality.

Also related to the film is the short featurette "My Winnipeg" Live in Toronto, chronicling a 2008 screening of the film.

Of the short films included here, there are two varieties. Four of them are "cine-essays" where Maddin collaborates with Evan Johnson to explain different elements of Winnipegiana. All are 2-4 minutes long and cover the topics of puberty, trees, cold, and color. They appropriate old footage to create warped versions of vintage educational videos.

The other short films are five unrelated pieces that Maddin has made since My Winnipeg, including the adorable 2008 mini-movie Spanky: To the Pier and Back, in which the director takes the pug seen in My Winnipeg on a walk and shoots different pieces of it. Heartbreakingly, as he reveals in the intro, Spanky died shortly thereafter. He was very old.

Sinclair is an abstract piece from 2010 taken from a film celebrating the Toronto International Film Festival's Bell Lightbox building. There's not much to it. There is even less to the more recent The Hall Runner, a rumination on lengthy carpets and their place in the home.

At 20 minutes, 2012's Only Dream Things is the longest of the shorts. This one was created by Maddin with Enright for an art installation, and it ties into My Winnipeg as it builds from the memory of Maddin's older brother who died as a teenager, which is referenced in the main movie. Only Dream Things uses home movies, some new footage, pop music, and experimental film treatments to create a haunting collage of memory.

The most different is from 2014 and is an animated short called Louis Riel for Dinner. Maddin doesn't direct, he only narrates, and this bizarre tribute to the Canadian folk hero is purported to be taken from a story Maddin found outside his elementary school as a kid.

The Hall Runner and Louis Riel are the ones that don't have video introductions, but they do have brief text cards as preface.

Finally, you also get the theatrical trailer for My Winnipeg.

FINAL THOUGHTS:
Guy Maddin remains a singular voice in world cinema, lovingly crafting a unique retro aesthetic while telling his own particular quirky stories. My Winnipeg is his most personal work, dealing as it does with his past and his origins, but using himself and his hometown as his subject also allows Maddin to be his most irreverent. Perfectly strange while also strangely inviting. Recommended. 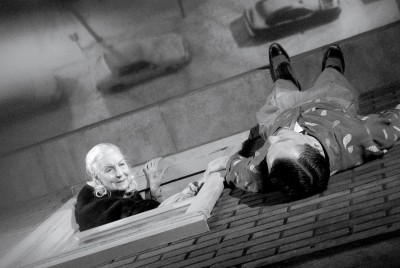