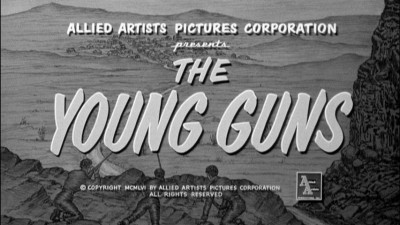 The 1956 western The Young Guns is essentially a cowboy capitalization on the juvenile delinquent fad. Russ Tamblyn (Twin Peaks' Dr. Jacobi) stars as Tully, the troubled son of a bad-to-the-bone outlaw. Tully has been trying to get by amongst decent folk, but too many of them can't forget where he comes from. After being pushed too far by a vindictive sheriff's deputy (Myron Healey), Tully packs it in and heads off to Black Crater, the mountain hideaway of outlaws like his old man.

Up there, the boy discovers that other offspring of wanted criminals have taken over the community. Their fathers are off pillaging and fleeing from the law, leaving a generation gap. It's all teenage toughs and senior citizens up on the hill. And one girl, Nora (Gloria Talbott, All That Heaven Allows), the daughter of the head bank robber. She is only hanging on to look after her little brothers. Nora wants to go live an honest life somewhere, and she encourages Tully to do the same before Black Crater takes away any hope for normalcy. Tully is sweet on Nora, and he won't go until she's ready to go, too. While he waits, he fights his way to being the leader of the gang, discouraging gunplay and any legal risks. The inactivity makes the other boys antsy. Trouble is just one frayed nerve away.

The Young Guns is directed by Albert Band, who helmed a picture every few years right up into the early 1990s when he called the shots on the Prehysteria series. This western was his debut. He applies a steady directorial hand to what should have been a far more hormonal motion picture. These gun-toting teens, despite all their pent-up anger, are fairly tame. They do a lot of standing around and talking. They scheme and act big but rarely back up the posturing. The only time Band lets his performers cut loose is in a couple of fistfight scenes where Tully needs to prove his mettle. The brawls go long and get brutal.

Tully is actually kind of an interesting character, a would-be gunslinger who doesn't like guns. His adolescent angst over not fitting in anywhere and not being judged on his own terms has an all-too familiar ring. James Dean had a similar identity crisis only a year before in Rebel Without a Cause. Someone should have run that film for Russ Tamblyn. He is stiff as a brand-new saddle, and his emotional pleas only serve to make him look like a crybaby rather than a conflicted young adult.

Still, outside of a few goofy choices in the climax, The Young Guns is a solid if unremarkable western. It delivers the basic plot one might expect from any number of outlaw pictures, it just fails to live up to its idea of making a juvenile-delinquent exploitation movie for the boots-and-spurs crowd. The adolescent anxiety is there, but little else. 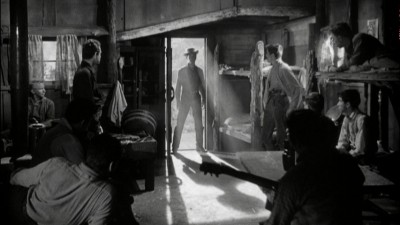 Video/Sound:
The widescreen transfer of The Young Guns from Warner Archive is on average all right, with a clear picture and no terrible marks or scratches. The black-and-white image is a little soft in terms of resolution, but the detail is still fine.

The mono soundtrack sounds fairly good with no distortion or dropouts.

FINAL THOUGHTS:
Rent It. A decent plot and an interesting premise makes The Young Guns worth a look, though the 1956 western suffers under a leaden directorial hand and stiff performances. The fight scenes are pretty good, but don't be afraid to get up and go to the bathroom or make yourself a snack in between them. You won't miss much. 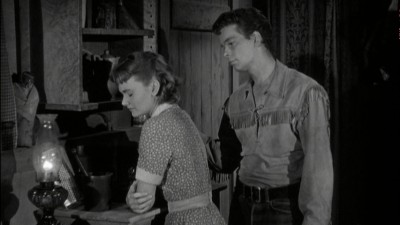