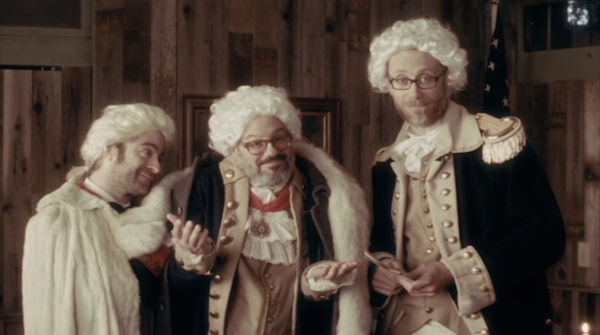 Comedy Central is just killin' it these days. In the past two years, the network has debuted some of the funniest sketch and situation comedy programs of their nearly twenty-five year existence, including Broad City, Kroll Show, Inside Amy Schumer, and Key & Peele. One of the funniest and strangest of these shows is Drunk History, from comedian Derek Waters and director Jeremy Konner. Though the title makes it sound like cruddy high-concept schlock -- i.e., "Hey, what if Martin Luther King was drunk during his 'I Have A Dream' speech?" -- this unique program is actually pretty faithful to historical events and instead focuses on taking the distracted, slurred ramblings of barroom repartee and elevating it to high art (or, at least, solid comedy).

In a typical episode, Waters and his crew will descend upon a particular American city, soak up some local color and chat with locals in bars, before sitting down three storytellers to each spin a historical yarn about the city in question (some of the second season episodes aren't confined to one city and follow a broader theme, like sports or music). The storytellers can be stand-up comics like Kurt Braunohler, Jen Kirkman, and Jonah Ray, actors like Breaking Bad's Matt Jones, Obvious Child's Jenny Slate, and Criminal Minds' Paget Brewster, or other charming personalities like radio host Phil Hendrie, writer Molly McAleer, and cooking show hosts Alie & Georgia. The one thing that is certain is that they will be too drunk for their own good. The unassuming Waters does not function as a traditional TV show host -- he never addresses the audience, for example -- but he basically steers the storytelling guests through their inebriated hazes to get the key points of their historical narratives (and wrangles them when they get too rowdy).

The stories are illustrated by re-enactments faithful to the drunken narration. Actors lip-sync to the pre-recorded monologues, maintaining the slurs, stumbles, brainfarts, and distracted asides of the storytellers as though they were the natural products of the characters. For example, when comedian Jenny Johnson stops in the middle of her story about the burning of the White House during the War of 1812 to say, "Smile and wave at me real quick. I gotta Instagram this shit," one of the British soldiers in the re-enactment (played by Waters, coincidentally) pulls out a smart phone and mouths these words to his nearby comrades in sync with Johnson's speech.

In addition to the great cast, part of the charm of this low-budget show is the way that it mixes grand-looking visuals with intentionally bargain-basement effects. Though the cast is always clad in accurate-looking period attire, sometimes it will look a bit odd-fitting, like something out of a school play. Similarly, though many of the stories feature surprisingly lush photography, toys will blatantly be used to stand in for things that are too expensive to realize: a horse that gets shot, a helicopter, or the Statue of Liberty.

In a strange way, the reason the show is so good is not reliant on its central gimmick. The key to the show is the passion with which each storyteller recounts a piece of history. Though some of these stories fall under the heading of common knowledge, most of them are more specialized and revelatory or even revisionist. As a music buff, I already knew that Johnny Cash agreed to listen to Kris Kristofferson's demo tape only after he landed a helicopter on the Man in Black's front lawn, but I had no idea that teenager Claudette Colvin planted the seeds of the Montgomery bus boycott nine months before Rosa Parks's arrest. Though our narrators may be unreliable, their topics are novel enough that we want to stick around to hear what they are going to say -- which is more than you can say for what drunks usually want to tell you. 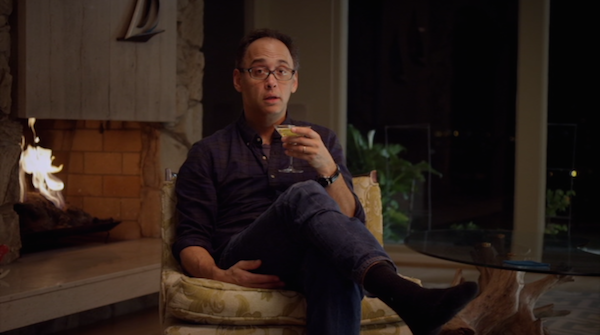 See, I told you there was a lot of talent. I took this screenshot of David Wain, and I just realized I didn't even give him a mention in the ginormous list of names up above.

The DVD
The eight episodes of Drunk History's Season 1 are squeezed onto one DVD, with a couple of extras, while the ten episodes of Season 2 are spread out on two discs, with an hour-plus of bonuses on each disc. All three discs come packaged in a single keepcase, with an ornate, embossed cardboard cover that mimics the history book seen in the opening credits of every episode.

The Video:
I watched Drunk History in its original airings in HD, and unsurprisingly the widescreen 1.78:1 presentation on the DVD is a bit of a comedown. It just looks too indistinct in comparison to the crispness of the HD. Otherwise, the color reproduction is good. There's some occasional crushing in the shadows and some artifacting. It's not unacceptable, but it's not the best the show can look either.

The Audio:
The discs offer both Dolby 5.1 surround and Dolby 2.0 stereo audio mixes. Considering how talky the show is, there's not a huge difference, but the show does feature a lot of musical score by Dan Gross, which is well served by the surround mix. Also, the DVD version is uncensored, so the many bleeps heard on TV are replaced with perfectly recorded and mixed curse words. On the subtitles front, the disc offers English SDH.

(7:12) - The version of Chris Romano's story that made it into the show includes a moment of Romano pulling his pants down. You better believe there is more footage of that (blurred) full-frontal debacle in this bonus.

Final Thoughts:
I was addicted to Drunk History during its TV airings, and I was pleased to see that the show holds up to repeat viewings on home video. The simplicity of the show's premise and the ingenuity of its execution, abetted by a star-studded cast of comic ringers, make it irresistible. Highly Recommended. 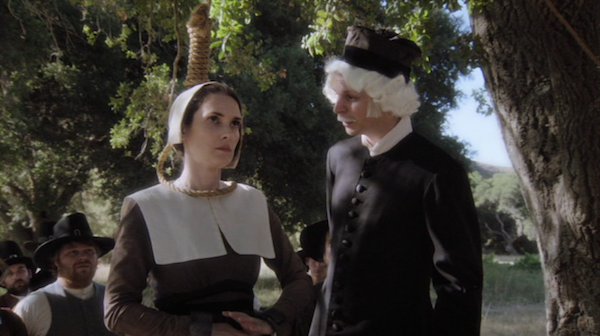