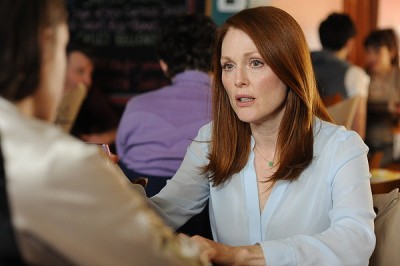 Every year when the Oscar nominees are announced, there is always chatter about why certain movies get nominations in particular categories and not others. This can be controversial, such as the talk around Selma this year, or Ben Affleck not being nominated as director for Argo a couple back, when the missed opportunity is for work that seems worthy. No such mystery exists in the case of Still Alice, however, which got one nod this year: Julianne Moore for Best Actress. All it takes is watching Still Alice to see why: Moore's performance is exceptional, and the movie is not.

Based on the best-selling novel by Lisa Genova, Still Alice tells the story of a linguistics professor who, at the young age of 50, is diagnosed with a rare form of early on-set Alzheimer's. Alice (played by Moore) is a wife and mother of three, but also an accomplished researcher who has devoted her life to the study of how people communicate. The idea that she will lose her memories, that speech and intellect will fail her, is devastating. Still Alice details her decline, and how both she and her family react to the disease's increased dominance in their lives. Her husband (Alec Baldwin, 30 Rock) is also a professor, while her son (Hunter Parrish, Weeds) is a medical student. Her two daughters couldn't be more different: the youngest (Kristen Stewart, Twilight) is the family rebel and her eldest (Kate Bosworth, 21) is a go-getter who is trying to have kids of her own. This latter detail becomes more complicated now that there is a possibility that the type of Alzheimer's Alice struggles with is hereditary.

The casting of Still Alice is excellent. Baldwin smartly steps back and takes the idea of a supporting role seriously: he is there for Moore to work off of, never really showing off himself, forced to grapple with some rather idiotic dialogue here and there but taking it like a champ. Bosworth, likewise, proves a strong companion to Moore, and ends up bearing an uncanny resemblance to her onscreen mother. She also plays well with Stewart, who proves excellent here. I've never seen any Twilight movie, so my impression of her is based on films like Adventureland and Welcome to the Rileys. She doesn't get enough credit for her naturally quiet style. The role of the spoiled actress could have been the most cliché, but she keenly observes that her character is the one who has the most empathy for her mother's plight, and Stewart takes hold of that and makes something out of it. 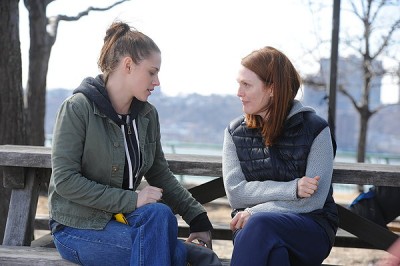 Even so, no one can mistake Still Alice for anything but a one-woman show. Julianne Moore is in every scene of the film, and she is challenged with showing the complete physical and mental transformation of her character while also maintaining the core personality. As the title implies, Alice never completely goes away, and her central struggle is maintaining herself even as everything about who she is fails her. Moore has such an effortless grace on screen, she never appears to be anything more than 100% present in the moment. It's a tricky performance that she pulls off without any tricks--no exaggerated gestures, no shouting and screaming, no flash.

Which makes it all the more frustrating that Still Alice is not a better movie. This adaptation is written and directed by Richard Glatzer and Wash Westmoreland, the team behind one of last year's worst films, the Errol Flynn biography The Last of Robin Hood. I could pretty much cut and paste my complaints about that movie and apply them here. Visually, Still Alice is indistinct and bland; as writing, it's predictable and shallow. What the pair has cooked up is essentially a Lifetime Channel disease-of-the-week movie with a better vocabulary. Since both Alice and her husband are professors with a science background, they understand the medical explanations without much effort. Not so much for the rest of us, and one gets the sense that Glatzer and Westmoreland hide behind the medical jargon to get around having to understand what's really going on themselves.

So, additional credit to Moore for how effectively the emotion of the piece is conveyed, as it's pretty much entirely on her to pull the drama out of the banal script. She singlehandedly makes Still Alice a legitimate tearjerker without resorting to manipulation. I would bet you could turn the volume down on the movie and watch it in silence, and she could still convey all the pain and heartache to you through expression and gesture alone. And while a great performance does not a great movie make, it makes a thoroughly average one more than watchable. 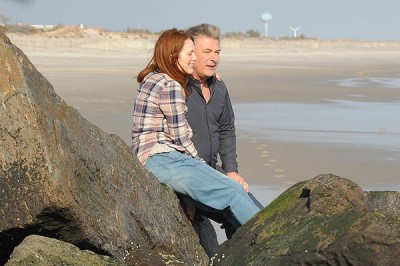