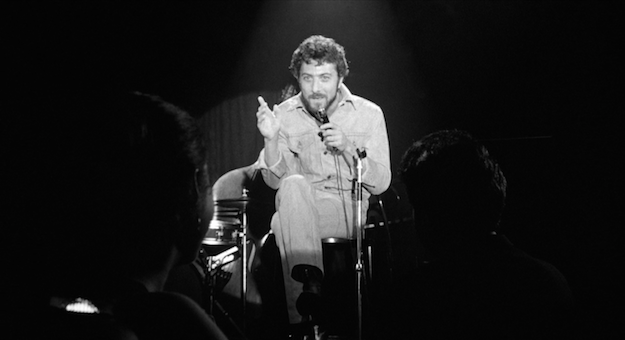 Lenny Bruce's importance to stand-up comedy cannot be overstated. There would be no George Carlin, no Richard Pryor, no Eddie Murphy, no Louis CK without Lenny Bruce. They may or may not take direct influence from Bruce's work, but their irreverent philosophical musings, coupled with an affinity for "earthy" language, might never have impacted mainstream culture without Lenny rushing in there first to push the cultural envelope, to get busted by the authorities, and to essentially become a martyr for free speech. In 1972, George Carlin turned the fact that you can't say "cocksucker" on television (along with six other well-documented phrases) into an influential comedy bit, but a mere decade before, Lenny Bruce was put on trial just for uttering that word onstage.

Naturally, that trial figures prominently into director Bob Fosse's 1974 biopic Lenny, a jagged, impressionistic film, shot in stylized black-and-white, that approximates its subject convincingly. The script by Julian Barry, adapting his own play, is based largely around material from Lenny's comedy act. Big chunks of the film consist of star Dustin Hoffman as Lenny doing credible versions of the original stand-up performances onstage. But Barry often sticks Lenny's jokes in a blender in constructing the other dramatic scenes too. In bringing the aforementioned trial to the screen, Barry and Fosse underline the perverse kick that the lawyers and witnesses seem to get out of repeating the word "cocksucker" in court. That's an observation straight out of Lenny's act.

Elsewhere, there's a scene where Lenny leaves a Chinese restaurant as the waiter tells him to say hi to his wife, then goes on a complimentary ramble about her, only to have Lenny reply, "We're divorced." Without missing a beat, the waiter says, "You're better off." That's straight out of the act too.

But, wait I'm getting way ahead of myself. You don't even know what wife I'm talking about.

For around half of its running time, Lenny is a fragmented love story, spilling out in flashbacks that detail the relationship of Lenny and his wife Honey, played superbly by Slaughterhouse-Five's Valerie Perrine. A stripper with a knockout figure and impossibly long hair, Honey is, as Lenny puts it in the film, "a shiksa goddess." Honey's attraction to Lenny is a little less clear-cut -- especially since the film, in a harsh bit of artistic license, makes him seem like an utter dolt onstage at the time Honey meets him. But the connection is apparent from the beginning, and despite harbingers of difficulties to come, soon the pair are hitched. Jealousy leads Lenny to ask Honey to quit her dayjob and join him in a double-act at Catskills-style resorts; she acquiesces, but is soon back to stripping anyway when Lenny's aversion to authority gets them blacklisted from the resort circuit. They move across the country to sunny California, where they become susceptible to swinging and smack (not necessarily in that order).

According to the Blu-ray commentary track by Twilight Time's Nick Redman and Julie Kirgo, Bob Fosse's favorite sequence in the film is a striking, completely silent three-way sex scene between Lenny, Honey, and a strange woman. Like most of the film, it is simultaneously a sensual aesthetic feast and somehow detached and abstract. Bruce Surtees's high-contrast photography is a consistent blend of glamor and grit throughout the film, and it suits this carefully choreographed sequence brilliantly. This conjugation is so entrancing that it kind of doesn't matter that the scene has pretty much no basis in fact and that Fosse cooked it up because he likes threesomes. Fosse may just be working out his own issues through the lens of Lenny Bruce, but he's enough of a full-blown genius that it still makes for sterling artistic output.

The second half of the film focuses more on Lenny's professional rise and personal fall. Though the entire film to this point has been soaked in the semi-seedy atmosphere of the joints where Lenny and Honey ply their trades, it thankfully doesn't wallow too depressingly on the couple's drug addiction. It doesn't ignore it either. Near the end of the film, Fosse presents a nearly ten-minute unbroken wide shot of a wasted Lenny, wearing only a raincoat and one dark sock, struggling to string his thoughts together on a nightclub stage while nearby cops wait to bust him for obscenity and the audience waits for something funny. But, more than drugs, Lenny is shown in the film to have a legal addiction. As sheriffs and DAs across the country seemingly get their kicks by continually shutting down Lenny's sets and locking him up, he becomes obsessed with his legal cases. He wants to prove that justice is being thwarted. He begins reading excerpts from his trials on nightclub stages (as seen in the Lenny Bruce Performance Film) to dwindling attendance.

By 1974, Lenny Bruce was already a countercultural folk hero, but Lenny smartly doesn't present him as anything more than a man. Hoffman seamlessly embodies the charming quick wit, the wounded psyche, and the righteous indignation of Lenny. When he's onstage, Hoffman's timing and inflections may be a little bit different from the original performances, but taken as a whole, he nails the essence of that material. The same can be said for the film in general. Though its not a complete definitive picture of Lenny Bruce's life, it certainly does a bang-up job of communicating the essence. 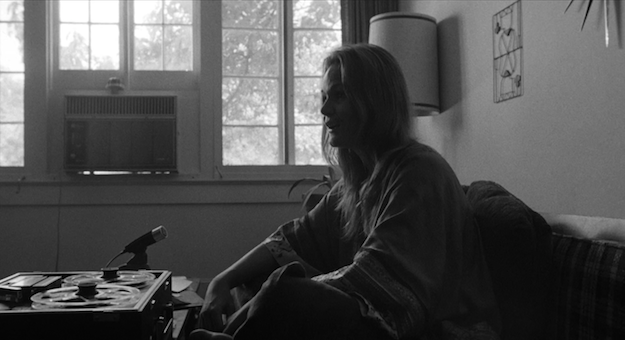 The Blu-ray
As with most Twilight Time releases, Lenny comes in a limited edition of 3000 copies. It includes a booklet full of black-and-white stills and an essay by TT's Julie Kirgo.

The Video:
Truly gorgeous. Bruce Surtees and Bob Fosse lobbied Kodak to manufacture the particular black-and-white stock used for the film, giving the images greater depth-of-field and sharpness, which then leaves it up to Surtees to create "focus" effects with his lighting. As I said above, it allows the film to fluctuate between a gritty realistic look and outright stylized glamor. In general, the AVC-encoded 1080 1.85:1 transfer does an excellent job of reproducing this for HD. The shadow detail and overall fine detail are both appealingly crisp. The blacks are inky and enveloping. The film structure is satisfyingly intact. Unfortunately, like the master MGM provided for TT's Love and Death disc, there is a fair amount of dirt and white speckles on the image, but oddly it kind of works more in favor of this particular film's aesthetic.

The Audio:
In the same way that the choice of black-and-white stylizes the visuals, the DTS-HD MA mono audio shows that Fosse also worked to create specific impressions with his audio too. Lenny's nightclub performances sound like they are being fed directly out of an old P.A. The Citizen Kane-style interview scenes that help provide the film's backbone have a distinct field-recording sound. The rest of the film too has a slightly boxy aura, which seems to me an attempt to give the proceedings a "retro" sound, especially considering how much higher-fi the music-and-effects track sounds (see below). For that reason, it's hard to exactly find fault with any shortcomings of the audio, because it seems like those faults were part of the conception of the film. The disc offers one subtitle option: English SDH; unfortunately, the subtitles sometimes play it a little fast and loose with the actual words being spoken. (What is this, a Warner Bros. disc!?!)

Special Features:
- What a treat. Film historians Redman and Kirgo have a lot to say about Lenny, and not all of it is complimentary. Whether pointing out places where Fosse conflated his own life events with Lenny's, mentioning unsavory aspects of Lenny's biography left out of the film, or just bringing up gossipy behind-the-scenes stories, this is a thoughtful, vital, and fairly juicy companion to the film.

Final Thoughts:
Lenny was nominated for a boatload of Academy Awards when it was released, but it is far from the typical Oscar-bait biopic. It's thrilling and jazzy, an unparalleled work of art. This Blu-ray spotlights it perfectly. Highly Recommended. 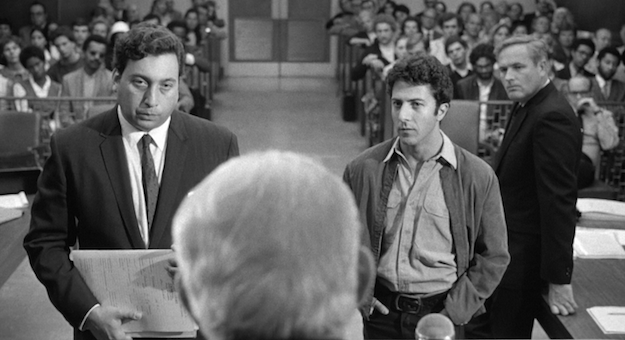