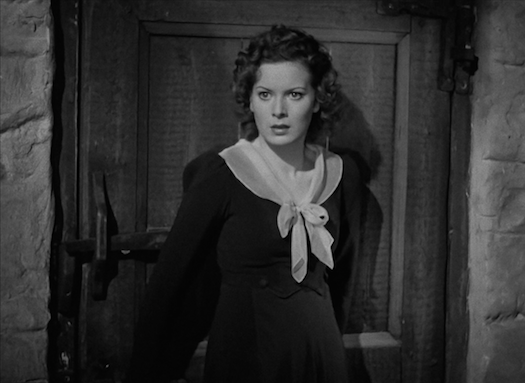 There are some common complaints made about Alfred Hitchcock's final British film, Jamaica Inn (1939), for good reason. Yes, star and producer Charles Laughton does chew the scenery so vigorously that the actor basically hijacks the movie from his notorious control freak director. Yes, beautiful leading lady Maureen O'Hara is still a bit too green at this point to be headlining a movie (she got better quickly, though). Yes, this all results in stretches of this period drama that don't feel exactly "Hitchcock-y."

Okay, the complainers have a solid case. I mean, even Hitchcock himself and the author of the original novel, Daphne Du Maurier (Rebecca, Don't Look Now), are among those who have disparaged this film since its original release (and box office success).

But let's take a moment and challenge conventional wisdom. Divorced from decades of knee-jerk critical panning and liberated from its purgatory of poor-quality public domain video releases, this great-looking new 75th anniversary restoration of Jamaica Inn reveals the film to be an entertaining thriller that features more Hitchcockian flourishes than decades of film writing might lead us to believe. Laughton is a hammy delight. Robert Newton, who later played Long John Silver in Disney's Treasure Island, makes for a compelling hero. Maureen O'Hara, as I said before, is gorgeous and easy to watch in this film. Plus, the supporting cast is a colorfully sketched crew of scoundrels.

The story is not Hitchcock's typical suspense fare, but it offers opportunities for some striking action scenes, and though the plot is reportedly dumbed-down from the original novel, it still offers some clever moments where we know more than our heroes, making us dreadfully nervous on their behalf.

O'Hara stars as Mary, an innocent young Irish woman who comes to England to live with her aunt at Jamaica Inn, after all of her family has died back in Ireland. Mary was unaware -- but is very soon made aware -- that her aunt is married to a burly brute named Joss (Leslie Banks, from the '34 Man Who Knew Too Much), who is the ringleader of a band of smugglers who lure ships to their rocky doom before slaughtering the surviving crew and stealing the booty. Because of this, Mary's coach driver won't even stop to drop her off in front of Jamaica Inn, instead leaving her and her trunk on the roadside nearly a mile past where she wants to stop.

Fortunately (or is it?), Mary finds herself near the mansion of the local squire, the incredibly self-important and slightly crazy Sir Humphrey (Laughton). Sir Humphrey is taken both by Mary's beauty and by her gumption, and he gladly provides her with assistance in getting back to Jamaica Inn. After all, he has business there himself. You see, unbeknownst to anyone besides Sir Humphrey and Joss, the old squire is actually the brains behind this shipwrecking scam. Reportedly, Hitchcock was annoyed that Laughton wanted the true nature of his character revealed fairly early in the script, but considering Laughton's pretty blatant, almost subtext-free performance, it's probably best that the film didn't try to play coy with viewers on this particular detail.

Newton plays a smuggler with a secret named Trehearne who suspects that the loot isn't being divvied up fairly. When he states this suspicion to his fellow smugglers, he shortly finds himself with a noose around his neck. Mary sees the whole thing and manages to save Trehearne while the others are distracted. Their potential escape by water is thwarted, leaving Mary to remember her old pal Sir Humphrey, whom she's sure will help...

The second half of the film satisfyingly puts all of the main characters separately into life-or-death situations that require deft navigation of what the other major players know about their true intentions. I'd explain further, but I'd rather not spoil some of the film's best scenes. I can mention that playwright Emlyn Williams, who actually did some writing on the original Man Who Knew Too Much, plays a rakish, whistling smuggler who manages to antagonize both the good guys and bad, simply because he is always out for himself.

Most of the reviews for this reissue of Jamaica Inn, including the one from our own DVD Savant, seem to be pretty favorable. Allow me to join this chorus of history revisionists because, setting the tumultuous production aside, this film is far from a misfire. Sure, it's no Rebecca or The Birds, but what is? 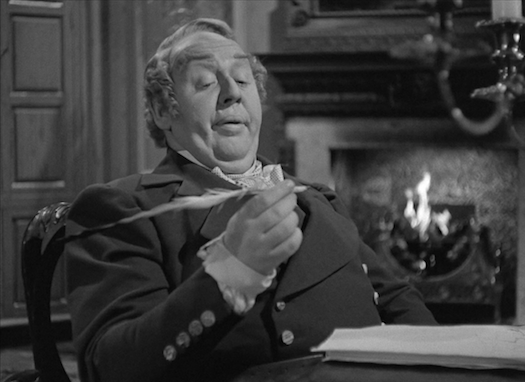 The Video:
The Cohen Film Collection's packaging touts a 4K restoration, and boy do they mean it. This AVC-encoded 1080p 1.37:1 transfer is spotless and stable, with incredible depth and detail, subtle contrast, and tight, attractive film grain. Some exterior shots are a little on the soft side, but these might be seamless matte shots, which in their creation were duped down a generation. If that's the case, even these optical shots look far better than the norm. A world-class upgrade over old releases, to be sure.

The Audio:
The LPCM 2.0 mono audio has also been thoroughly cleaned-up, with no detectable damage throughout. The audio mix still shows the limitations of the era in which it was recorded, meaning certain passages are a little muffled and indistinct while other moments get a little crispy on the high end. No subtitles.

- A great track, full of behind-the-scenes information delivered in an entertaining conversational style. If you enjoy the stories behind the story, this is a worthwhile supplement.

Final Thoughts:
Cohen Film Collection has basically rescued Jamaica Inn from footnote status. Here's hoping that this release does well enough that there will be inspiration to resurrect and remaster other neglected public domain gems that have only been available as piss-poor dollar-bin dupes. In case I wasn't clear: this release really looks beautiful. And the story's not bad either. Highly Recommended. 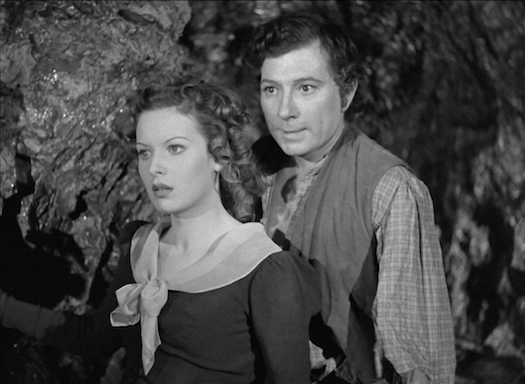