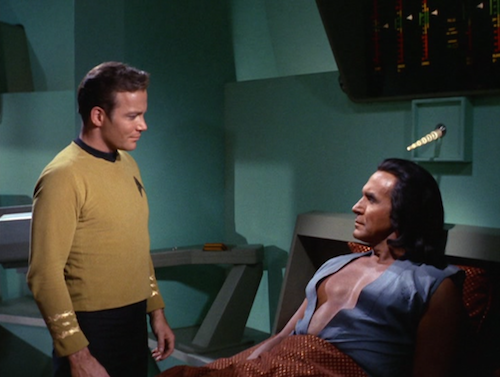 Star Trek has become such a pop culture juggernaut over the years, with an ever-expanding mythology and franchises upon franchises across various media, that it can be daunting for newcomers and casual fans to figure out where to dig in. The newly released 8-episode compilation set, Star Trek: The Original Series - Captain Kirk's Boldest Missions, might look at first glance like an unnecessary regurgitation of 1960s-era episodes with which fans of the show are already extremely familiar. However I would argue that, whether by thoughtful curation or crass commercial calculation, Captain Kirk's Boldest Missions acts like the perfect greatest hits collection (arguably better than the prior Best of Star Trek releases) -- giving newcomers a strong entry point to the series and giving casual fans a dud-free collection of great episodes at a reasonable price.

The set also does a good job of sticking to its proposed theme, highlighting stories in which William Shatner's Captain Kirk is forced to prove his mettle as the leader of the starship Enterprise -- and as a moral being. As always, he is assisted and somewhat antagonized by his second-in-command, the stern, ever-logical half-Vulcan Mr. Spock (Leonard Nimoy), and by the stubborn, sarcastic chief medical officer, Dr. "Bones" McCoy (DeForest Kelley). Because of this set's focus on Kirk, the other crew members tend to stay in the background, but engineer Scotty (James Doohan), helmsman Sulu (George Takei), communications officer Uhura (Nichelle Nichols), and, in the last few included episodes, navigator Chekov (Walter Koenig) all get little satisfying character moments -- especially in the episode "Mirror, Mirror" where they appear as aggressive, parallel-universe versions of themselves. 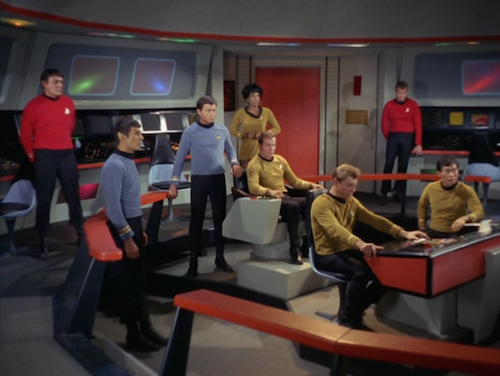 Here's a brief rundown of the episodes offered (5 from the show's first season, 3 from the second season, and none from the third season):

The Corbomite Maneuver - The Enterprise unwittingly enters the domain of a hostile federation and ends up threatened with complete destruction by a giant ship guarding the border. Kirk is forced to outsmart and bluff the opposing ship captain to save the lives of his crew. The twist ending is slightly goofy, but in an utterly charming way.

The Conscience of the King - Kirk must determine whether or not the head of a traveling theatrical troupe is actually a former head of state responsible for a terrible massacre that Kirk witnessed decades before. Does he follow his gut instinct or wait for more evidence? Complicating matters, Kirk takes a shine to the tragedian's daughter, but since this is Star Trek, their relationship is predictably short-lived.

Balance of Terror - One of the show's most famous group of aliens, the Romulans, are introduced in this outstanding and tense episode that intentionally plays like a submarine movie. A Romulan ship has broken a century-long treaty by crossing to the other side of a neutral zone to attack Earth-manned outposts. The Enterprise has to stop them from returning home across the neutral zone and instigating an intergalactic war.

Space Seed - The episode that introduced one of the show's greatest villains, Khan, played by Ricardo Montalbán at his most magnetic. The Enterprise crew discovers a ship filled with people who have been in cryogenic slumber for two centuries and awakens their leader, a genetically modified superhuman who fancies himself a conqueror on par with Napoleon and Alexander the Great. Khan later famously returned in the film, Star Trek II: The Wrath of Khan.

The City on the Edge of Forever - A delirious McCoy goes through a time portal and somehow affects the past so that the Enterprise no longer exists. Kirk and Spock zero in on the same moment in time and travel to 1930s New York, so that they can prevent McCoy from changing history. While they try to deduce what exactly they are supposed to be preventing, Kirk falls for a progressive do-gooder played by a wonderfully vivacious Joan Collins. The ending to this one is a real shot in the gut, but not a cheap one.

Mirror, Mirror - Kirk, McCoy, Scotty and Uhura wind up on a bizarro, more war-like version of the Enterprise during a beam-up gone awry. Kirk must mastermind a way for his party to get back to their own parallel universe without getting snuffed out by this cutthroat crew first. For those keeping track of the show's tropes, at one point Bones declares, "I'm a doctor, not an engineer," and Bizarro Spock performs a Vulcan mind meld.

The Doomsday Machine - The Enterprise must prevent an enormous mechanical "planet killer" that just destroyed an entire solar system from killing again. To make matters worse, Captain Kirk has beamed down to an abandoned ship and can't beam back, leaving behind a revenge-hungry commodore to guide the Enterprise straight into the path of this mindless destruction machine. Though he is waylaid for most of the episode, Kirk's absence creates incredible tension and suspense, making his eventual final play that much more satisfying. Also, Bones's catchphrase returns in this episode, as he grumbles, "I'm a doctor, not a mechanic."

Return to Tomorrow - Kirk convinces Spock and a female scientist to join him in allowing powerful aliens made of pure energy to inhabit their bodies temporarily, so that the aliens can use their human hands to make androids for the aliens to inhabit. Unsurprisingly, after their consciousnesses get switched, a few of the aliens get to liking their flesh and blood bodies better than their potential robot ones and refuse to leave. This episode might be the relative weakest in this batch, as the eventual struggle for control over different bodies and consciousnesses gets excessively convoluted and then wraps up a little too quickly. I still consider this an above-average episode overall. 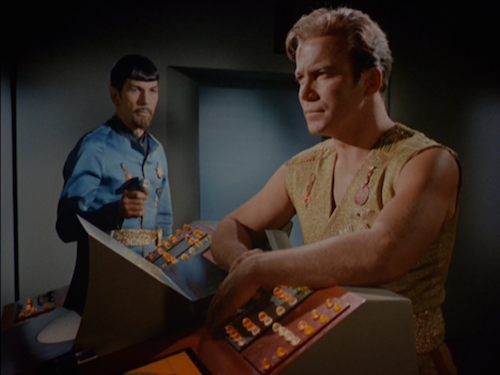 The DVD
Captain Kirk's Boldest Missions are presented on 2 DVDs in a single keepcase, with four episodes per disc and most of the bonus features (beside the episode intro - see below) on disc one.

The Video:
These are the same remasters that Paramount has been offering since 2007, meaning that these standard 1.33:1 presentations are quite good. Colors and contrast are strong. Fine detail comes and goes, but this seems largely the result of the way the show was shot, as opposed to the post-production work. For the most part, the images are clean and stable, with newer CGI replacing the original special effects shots and "exteriors."

The Audio:
The Dolby 5.1 surround remix does a nice job of beefing up the original soundtrack without making it too showy and excessively directional. The disc offers one subtitle option: English SDH.

(3:41) - The first of four featurettes nicked from the 2007 box set, Star Trek Fan Collective: Captain's Log, in which Shatner rambles about his general thoughts and philosophies about what it means to be the man in charge.

Final Thoughts:
Star Trek fans might argue that this collection has no good reason to exist, and in a way they're right. If you're a Star Trek fan, you probably own these episodes multiple times over. There is literally nothing new here for you. This is not for you. For someone unfamiliar with Trek, or only somewhat familiar (I put myself in this latter camp), this is an excellent primer. Of course, as with any greatest-hits compilation, there's room to grumble about missing favorites (I love the humor of "The Trouble with Tribbles," but I admit it doesn't count as a "bold mission"). Hopefully, this collection is just an appetizer or a gateway drug anyway. Highly Recommended. 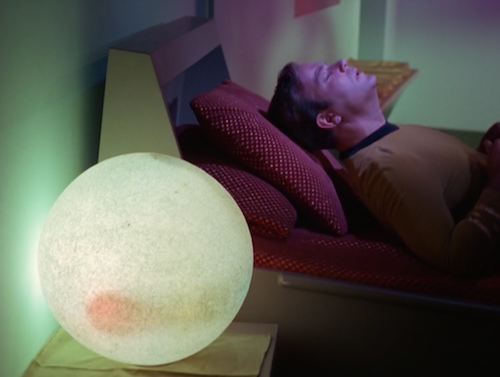