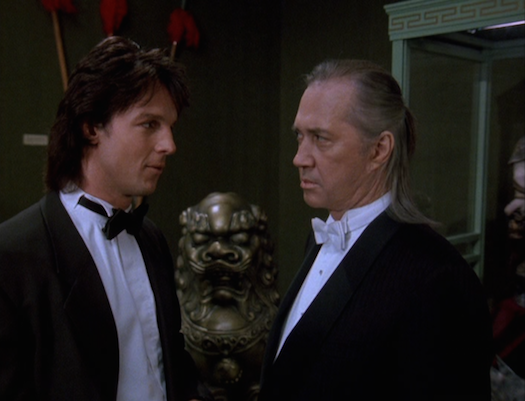 Here comes the second season of the reliably enjoyable (if inconsistently executed) mid-'90s sequel to Kung Fu (1972-75). Kung Fu: The Legend Continues returns David Carradine to the role of wandering Shaolin priest Kwai Chang Caine, but with a twist. This Kwai Chang Caine is actually the grandson of the original 19th Century Caine from the first show, and he lives in modern times. Somehow, this modern Caine is still half-American and half-Chinese two generations later. He also retains his grandfather's stoic manner, halting speech patterns, and willingness to provide help to anyone who asks for it. Executive producer Michael Sloan uses the Caine character to fashion a semi-remake of his short-lived buddy-ninja series The Master (noteworthy for being hilariously mocked on Mystery Science Theater 3000) by teaming Caine with a long-lost wiseacre son, Peter (Chris Potter), who has become a lone-wolf cowboy cop (is there any other kind?).

For the most part, the show's second season offers more of the same. Each story involves father and son teaming up either to solve one of Peter's criminal cases or to assist someone that has come to Caine for help. The writers do a good job of keeping the dynamic between father and son believably complex, so that their scenes don't just rely on mismatched-partner cliches. Also, the producers must have been given a note or something, because an effort is clearly being made in these shows to integrate Peter into the martial arts fight scenes, rather than sticking to the "old man kicks, young man shoots" scenario set up in the first season.

Writer-producer Sloan also attempts to build the Kung Fu mythology, by revisiting moments and characters from season one and the original series. As in the uneven first season, some of these attempts are more successful than others. For example, I don't think it was such a hot idea to kick off season two with the return of Martin Kove's "Shadow Assassin," even with a former James Bond, George Lazenby, now by his side as a mentor assassin. The original episode was ridiculously stupid, and the sequel is positively not better (don't get me started on that subplot about stand-up comedy). On the other hand, "Dragon's Daughter," in which Peter is targeted by a serial killer (Marla Sucharetza) who also happens to be the daughter of season one's nemesis character Tan, does a good job of spinning out new ideas from the established backstory.

In fact, this season has a handful of surprisingly effective, largely character-driven episodes. These episodes not only fill in gaps in the main characters' backgrounds, but they also allow Carradine and Potter to enrich their onscreen relationship by really digging into Caine and Peter's personalities. "Temple" has the pair returning to the scene of their traumatic separation fifteen years prior, to exorcise some lingering personal demons and to help out a single mom who is being hassled by religiously intolerant rednecks. "Tournament" uses the backdrop of an Enter The Dragon-style illicit tournament, run by a former enemy (Mako) and attended by a former lover, to explore Caine's life before he even knew Peter's mother. (Fun fact: Mako's villain in this episode is named Li Sung, which is the same name as the character he played during his two-episode stint on The Incredible Hulk.) 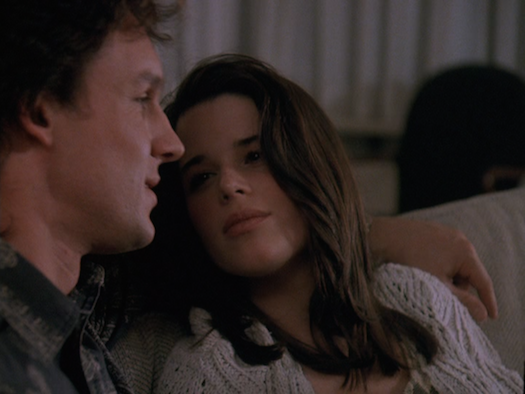 Kim Chan returns as the apothecary Lo Si, aka "The Ancient," who counsels Caine and provides mystical potions to help him battle dark forces because, as ever, mysticism of all stripes plays a part in many of these stories. Caine battles an evil "dark magician" in the aptly named "Magic Trick." Guest star Neve Campbell (implementing a distractingly thick Australian accent) needs to be saved from Aboriginal assassins practicing an outback brand of voodoo in "Kundela." Even in the episode where Geordie Johnson's Die Hard-style baddie George returns to hijack another party while masterminding another elaborate heist, "Sunday at the Museum with George," the stakes involve more than just the safety of the party guests, but the potential unleashing of a centuries-old curse.

One of the most memorable episodes from the first season was the Magnificent Seven homage "Dragonswing." The guest stars from that episode, Robert Vaughn (The Man From U.N.C.L.E.) and Patrick Macnee (the UK Avengers), see fit to team up again, along with Ian Ogilvy (of the late-'70s Return of The Saint) for the immensely entertaining and aptly named "Dragonswing II," in which Caine and the Dalai Lama (!! -- played by the always-working James Hong) need to be rescued from kidnappers.

Robert Lansing is once again excellent as Peter's foster father, mentor, and boss, Captain Blaisdell, and the season ends with a great Blaisdell-focused episode, "Retribution," in which the captain is framed for murder, Peter sides against him, and the new fugitive must turn to Caine for help. It would be Lansing's last screen appearance -- he died of lung cancer in October of 1994, around one month before this season finale originally aired.

What might be most striking about this second season of Kung Fu: The Legend Continues is how it spotlights some of David Carradine's finest performances. Sure, he's starting to get a little paunchy here, and the quality of his fight scenes vacillate wildly, depending on the approach of the episode director and editor. (Sometimes, he looks good and sometimes he just looks like an old man kicking slowly.) But Carradine's commitment to his character is far more intense this time around, making Caine an often entrancing and inviting presence. This performance is the glue that holds the show together, especially through the weaker stories in the season. I have a suspicion that this series is never really going to shake its inconsistency problem when the final two seasons are eventually released (I honestly don't remember from the original airings if that was the case), but hopefully the highlights will be as striking and memorable as the ones offered in this second season collection. 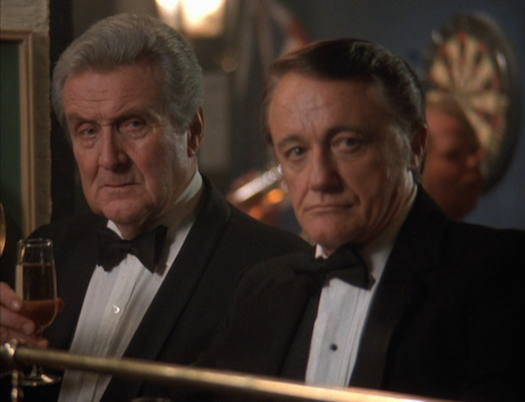 The DVD
The 22 episodes of the second season of Kung Fu: The Legend Continues are presented on 5 DVDs. As with season one, the initial pressing features real replicated DVDs which will eventually be replaced with the typical Warner Archive Collection manufactured-on-demand DVD-Rs. If you are interested in this series, you should snag a copy of this first printing.

The Video:
Once again, the standard 1.33:1 image looks surprisingly great, especially for a syndicated TV show from the '90s. This might even look a little better than season one. As before, the credits sequences and shots with optical effects look duped down, but the majority of show has been beautifully remastered, with rich colors, great detail, and strong blacks.

The Audio:
Another excellent Dolby 2.0 stereo audio mix, with a well-executed blend of dialogue, effects, and music. I watched some of these episodes on my laptop with headphones, and I was duly impressed by the layered and directional approach to the sound design. No subtitles.

Final Thoughts:
In its second season, Kung Fu: The Legend Continues successfully deepens its characters but still can't quite manage to shake off the inconsistency of its writing from the first season. The leads, David Carradine and Chris Potter, create such a compelling onscreen father-son relationship that it often doesn't matter. Once again, the episodes look better than they probably did during their original airing. Bring on season three! I'm ready! Recommended. 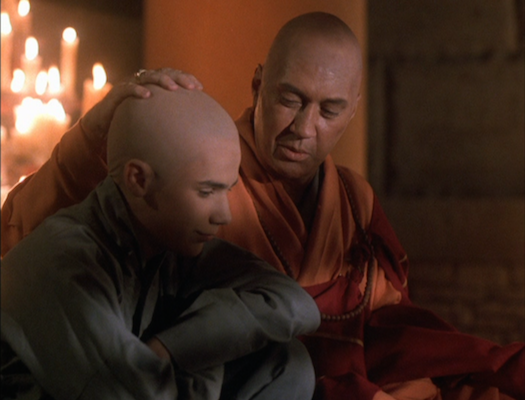