Night of the Generals, The

"Here are the names of three generals. I want to know everything about them."
"Everything may be too much. What specifically are you looking for?"
"One of them is a... a murderer."
"Only one? But murder is the occupation of generals."
"Then let's say what is admirable on the large scale is monstrous on the small. Since we must give medals to mass murderers, let us try to give justice to the small... entrepreneur." 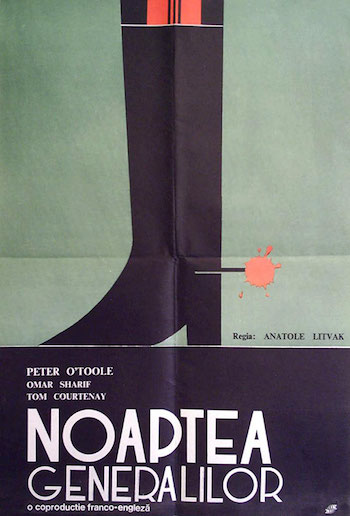 The 1967 war drama The Night of the Generals starts off with a great premise. It's 1942 in Warsaw, and a Polish prostitute who has been working as a German agent has been brutally murdered. For a moment, it seems like the crime might be politically motivated, but the intensity of the killing (over one hundred stab wounds) points instead to an act of insanity or passion. A witness in the woman's apartment building reluctantly reveals that he saw the murderer leave, and that he was wearing a German general's uniform. Major Grau (Omar Sharif), the investigating German intelligence officer, believes the man and starts a crusade to bring down whichever ugly-hearted general committed this crime.

It turns out there were three generals without alibis for that night: the frivolous would-be playboy General von Seidlitz-Gabler (Charles Gray, best known for playing the villain Blofeld in a James Bond movie and later the Criminologist in The Rocky Horror Picture Show), his more competent and darkly humored assistant General Kahlenberge (Donald Pleasence, who played Blofeld in a different James Bond movie and later played a criminologist of sorts in many Halloween movies), and the fastidious and humorless General Tanz (Peter O'Toole, reteaming with his Lawrence of Arabia producer Sam Spiegel and costar Sharif). The film teases for a brief moment that Grau will vigorously investigate all three of these men, but it's clear from the start that the seemingly compassionless and thoroughly sadistic Tanz is the prime suspect.

The film also flashes forward to 1965, during which we see French Interpol Inspector Morand (Philippe Noiret) seeking information from some tangentially related men on the still-unsolved murder from twenty-three years ago. This structural choice creates many logical questions that keep viewers curious about where exactly this investigation plot is going, but then the screenplay -- credited to Joseph Kessel and Paul Dehn, with reported additional contributions from Robert Anderson and Gore Vidal -- meanders off into a series of less interesting subplots. General von Seidlitz-Gabler's wife (Coral Browne) tries to make a match between the young and handsome General Tanz and her headstrong daughter Ulrike (a sadly underused Joanna Pettet). Ulrike bristles at the idea of being a monster's wife and pursues the vaguely pacifistic Corporal Kurt Hartmann (Tom Courtenay) instead.

That's okay because Tanz seems to think ladies are icky -- though it's never more than hinted at, one gets the feeling (especially considering Gore Vidal's track record) that Tanz is meant to be read as a self-loathing homosexual who secretly turns to drink and not so secretly turns to brutality as an outlet for his inner torment. When Corporal Hartmann is assigned to drive Tanz around Paris on the General's day off, General Kahlenberge wryly suggests that, if it turns out Tanz wants Hartmann to further "entertain" him in his apartment, the young corporal should do so -- "for the Fatherland."

Further entangled in this film is the story of the "Valkyrie" plot, notably used as fodder for a Tom Cruise movie in 2008. In 1944, many of Hitler's officers began to lose faith in their leader and plotted to blow him up and get him out of the way, to get a smarter leader in there. One such possible alternative is the well-liked military leader Rommel, who is played here by Christopher Plummer, in a welcome cameo. The script manages to dovetail the murder investigation plot and the "Valkyrie" treason plot in a smartly executed confrontation between Omar Sharif and... well... ahem.

The Night of the Generals is a flawed film that benefits immensely from a top-flight cast. Although it takes a moment of adjustment to accept all these Britischer Germans (once it becomes apparent that Omar Sharif is going to be the only cast member to attempt a reasonable and consistent approximation of a German accent), the performances are, by and large, beautifully realized. Yes, O'Toole does become strangely cartoonish when forced to enact Tanz's most peculiar characteristics, but arguably this hamminess at least spices up the film's flabby and overblown midsection.

Other recent reviews I've read -- including our own DVD Savant's -- take director Anatole Litvak to task for an unimaginative, workmanlike job, but I personally thought his direction was engaging, with only his handling of the love story subplot coming off as particularly bland.

Producer Sam Spiegel clearly subscribed to the notion of "Go big or go home." This film, on the other hand, arguably would have benefited from a smaller scope and at least thirty pages chopped out of its script. Even so, The Night of the Generals still offers a reasonably diverting story and plenty of engaging performances for fans of old-fashioned grand-scale entertainment.

The Blu-ray
The Night of the Generals comes in a limited edition of 3000 copies. The disc is packaged with a color booklet featuring an essay by Twilight Time's Julie Kirgo.

The Video:
Much like their recent A Man For All Seasons reissue, this is a gorgeous, near-perfect restoration from Sony and delivered to Twilight Time. Colors are richly saturated, and the fine detail is extraordinary. There are teeny bits of dirt here and there, but the image is typically clean and stable.

The Audio:
The DTS-HD MA mono audio is comparatively a little underwhelming, especially in the beginning. The soundtrack starts off sounding oddly muted and cramped, although it seems to improve somewhat as the film progresses (or maybe I just got used to it). Dialogue is clean and clear throughout, and the effects and ambience are effective. Maurice Jarre's score mostly sounds good, although it sometimes suffers a bit in this mono mix (the included 2.0 isolated score track offers some improvements). One subtitle option: English SDH.

Final Thoughts:
The Night of the Generals has a great beginning, a solid ending, and a meandering middle overloaded with unnecessary subplots. The cast is enjoyable, even when they're overdoing it (oh, Peter...). This new restoration looks outstanding and sounds fine. Recommended.