At first glance, Farewell Herr Scwarz looks like an Israeli version of Sarah Polley's slightly overrated documentary Stories We Tell. Both films are about women trying to dig up mysteries from their families' pasts while coming to terms with what these revelations mean for themselves and their current generation. When I saw it, I called Stories We Tell "Maury for hipsters". While I understand that might be a glib generalization, I think it described the film pretty succinctly while emphasizing on the fact that, while the minutiae of someone's life might be fascinating to that person, it doesn't always translate into universally relatable or interesting drama. As tender and loving as Polley's film was, her story of finding out the identity of her biological father felt more like a well-made testimonial meant for her immediate family and not for the audience at large, who doesn't know Polley personally. 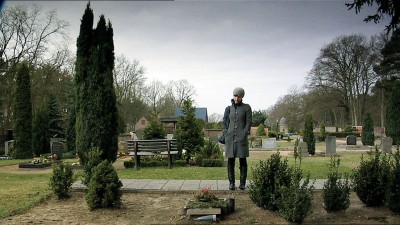 On the other hand, as much as Yael Reuveny's documentary also tells a profoundly personal story, the fact that it puts an individual face to an astoundingly massive tragedy like the Holocaust turns it into a more universally relatable film. Sometimes it's hard to grasp the effect on individuals when we try to wrap our minds around atrocities where millions of people are killed. Intimate stories like Farewell Herr Schwarz allows us to go from the macro into the micro as we witness just how much a family can be broken after events they had no control over.

Reuveny turns the camera on herself as she tries to find out more about her great uncle's past. After his entire family was killed during the Holocaust and he himself survived a concentration camp, her great uncle decided to stay near the town in Germany where the camp was located in order to build a family with the woman he loved. Meanwhile, his sister moved to Israel and had a family of her own. Yael is part of the third generation of that Israeli family. The siblings never saw each other again after Yael's great uncle didn't show up at a train station to go away with his sister.

Through interviews with Holocaust survivors who knew her uncle, as well as people who lived with him in the town next to concentration camp, Reuveny tries to find an answer to questions that must also occur in the audience's mind: "Why didn't this man get as far away as he could from Germany as soon as he was out, and instead decided to build a life just a couple of miles from where most of her family was killed? Is the power of love strong enough to be reminded of that place every day of your life while turning your back on your surviving family members?"

Of course it's impossible to get definitive answers since both siblings are dead, but a personal link can still be formed between the Israeli and German families. Through tender and emotional personal trips around her great uncle's hometown with one of his children, Reuveny manages to find some form of reconciliation between the siblings via a connection between the later generations. In a purely technical sense, Reuveny's film follows a predictable structure that intercuts between interviews and trips through her great uncle's past. However, her dedication to bring a human face to the multi-generational effects of such a massive tragedy works almost like a shorter version of Claude Lanzmann's masterpiece Shoah that focuses on a single story.

This documentary was obviously a low budget effort and it looks like Reuveny utilized various different digital cameras during production. The camera used for the interviews seem to be a lower resolution consumer kind, and therefore presents softer edges and a lot of video noise like aliasing and banding. The outdoor sequences that show Reuveny discovering her great uncle's past seems to have been shot with a better, more professional grade camera and shows a wider range of color and depth. Even though it tells a very interesting story, Farewell Herr Scwarz is visually not very appealing and can be easily watched on a smaller screen.

The lossy Dolby Digital 2.0 track does a good job presenting clean audio and that's as much as you can ask from a DIY documentary like this. The interviews and the narration are mixed well.

We only get a Trailer.

Farewell Herr Schwarz is an intimate portrayal of a family torn apart because of the Holocaust, and one woman's efforts to bring the two separate sides together decades later. Yet even though the focal point is Reuveny's own story, the film shines during moments of heartbreaking honesty delivered by firsthand accounts of the Holocaust. A woman who suffered through a concentration camp explains with a chilling calm how he constantly thinks and dreams about the members of her family who didn't survive the war. It's hard to wrap our minds around such a high death toll, but hearing the pain of one person that still lingers to this day allows us to emphasize more clearly.